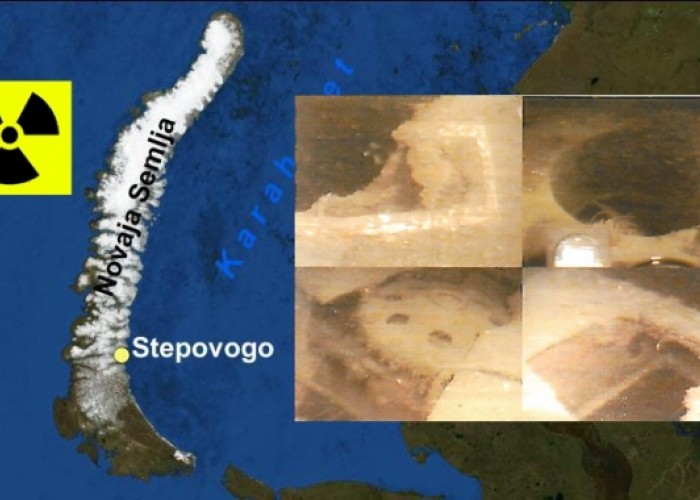 K-27 lies on the seabed in Stepovogo Bay. These underwater photos of the hull are taken by the Norwegian Radiation Protection Authorities during an expedition to the area in 2013.

K-27 was dumped east of Novaya Zemlya in the Russian Arctic in 1982.
Read in Russian | Читать по-русски
By

The submarine was dumped in shallow waters in Stepovogo Bay on Novaya Zemlya’s Kara Sea coast. K-27, a November-class prototype, had then been laid-up for more than 15 years after one of the two troublesome reactors suffered a severe leakage of radioactive gasses and inadequate cooling causing extensive fuel element failures.

Dumping the entire submarine at sea was done in what the Soviet reactor engineers and scientists believed would be a safe way to avoid leakages of radionuclides into the marine environment.

The two on board reactors are liquid-metal cooled and contain spent nuclear fuel, 800 kilograms of uranium to be precise.

Both Russian and Norwegian radiation experts have repeatedly warned that failing to lift the submarine eventually one day will cause leakages of radioactivity into the Kara Sea. A worst-case senario has even pointed to the danger of an uncontrolled chain reaction that could be triggered inside the reactor in case sea water one day starts to leak in through the protecting cover that today isolates the compartment holding the two reactors.

In 2013, a Norwegian-Russian joint study expedition to the dump site of K-27 concluded that it is feasible to lift the ill-fated submarine from the seabed. Although dumped 30 years ago, the hull of the submarine is intact.

«No corrosion damage of the outer hull was visible,» Hilde Elise Heldal with the Norwegian Institute of Marine Research told the Barents Observer after the expedition.