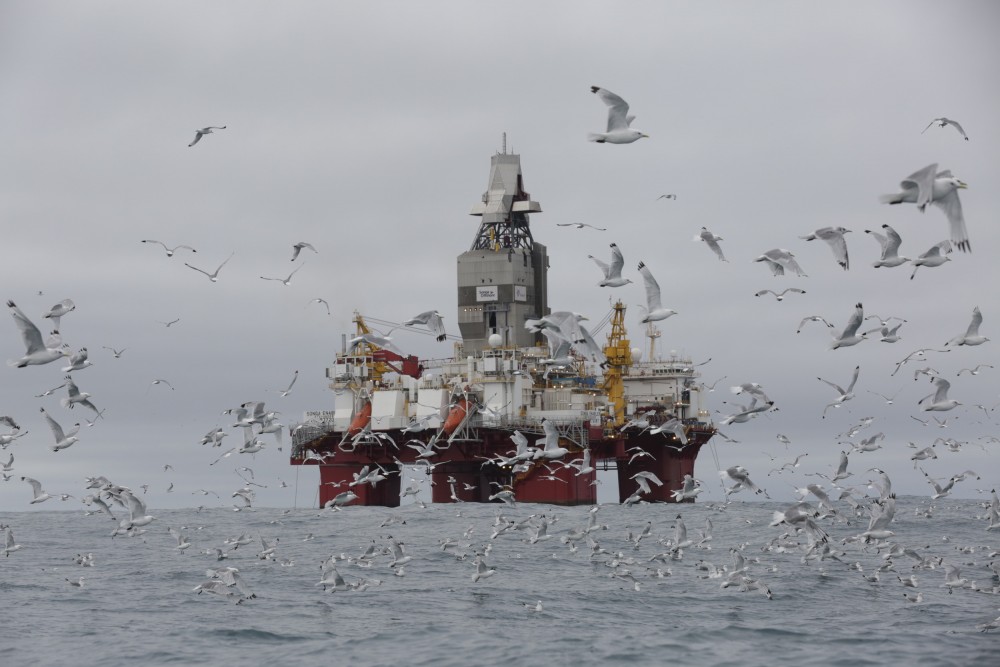 This photo is taken this week by Greenpeace near the oil-rig "Songa Enabler" at 74 degrees north in the Barents Sea. Photo: Nick Cobbing / Greenpeace

This photo shows how exposed seabirds are to a potential oil-spill, says the Greenpeace activists that entered the exclusive zone of Statoil’s oil rig on Thursday.
Read in Russian | Читать по-русски
By

«The most important threats to seabirds in the Barents Sea are increasing oil and gas activities and merchant shipping, fishing, environmental pollutants and climate changes,» reads a comprehensive overview and database made by researchers from seven Russian institutions in cooperation with the Norwegian Polar Institute.

On Thursday, activists from the Greenpeace vessel «Arctic Sunrise» put kayaks and inflatable boats on the water near Statoil’s oil rig «Songa Enabler». Holding posters with different languages, the message by the activists is «No oil drilling in the Arctic.»

Last week, Statoil started is northernmost drilling ever in the Barents Sea. The Korpfjell prospect is more than 400 kilometers north of mainland Norway, nearly as far north as Bjørnøya, the southernmost islands of the Svalbard archipelago.

«Statoil’s Arctic drilling program this summer is the most aggressive drilling program globally this year, and the Korpfjell and Koigen prospects the two most controversial in that portfolio,» Truls Gulowsen, head of Greenpeace Norway told the Barents Observer earlier this week.

According to the Russian, Norwegian database, there are 20 million seabirds, divided between 40 spices and 1600 colonies that spend the summer in the Barents Sea.

Greenpeace and its co-plaintiff Nature and Youth are taking the government to court in November, arguing that the new oil licenses are in breach of the Norwegian Constitution’s right to a healthy environment (Article 112). Despite the ongoing legal case, Statoil is drilling several new oil wells in the Arctic this summer.

Greenpeace Norway Arctic campaigner, Erlend Tellnes, from on board the «Arctic Sunrise», says:

«Norway is not as green as their image. With one hand, the government have signed the Paris Agreement and profiled themselves as an environmental champion, whilst handing out hundreds of new oil blocks in the Arctic with the other. They ignore and disrespect environmental, scientific recommendations and have offered the oil industry licenses in some of the most pristine areas of the Arctic. Now they have to answer for their actions in court,» Erlend Tellnes says.

From Oslo, Truls Gulowsen says to the Barents Observer Thursday afternoon that the crew on board the rig «Songa Enabler» has warned the activists about the safety implications. Normally, there is a safety zone around a rig during operations.

«We have at least equal rights to protest and protect the seabirds as Statoil has to drill in this area,» Gulowsen says.

On Thursday evening, Norwegian Police in Tromsø ordered the activists from «Arctic Sunrise», including small boats and personnel, to leave the security zone around the drilling rig.

The police writes in a press-release that Statoil has permission to drill in the area, a permission given by Norwegian authorities.

«Personnel and small boats from Arctic Sunrise have not left the security zone, despite the oil rig’s request to do so, and so they are disturbing the oil drilling. This is violating Norwegian interests according to the Petroleum Act,» the press-release reads.

«The Chief of Police of Troms Police District has given Arctic Sunrise orders to leave the security zone. If they don’t do so voluntarily, they will be removed by the Coast Guard.»

Statoil disagrees with Greenpeace and has published a list of counter arguments hoping to convince those sceptical to Arctic oil drilling. Regarding climate changes, the company writes it is fully committed to the Paris Agreement and is rapidly expanding offshore wind power business. «However, the world needs more energy than renewables can provide, and existing oil fields are dwindling. Even in the two-degree scenario, more oil is needed. That’s why we’re exploring for more fields.»

The Korpfjell prospect is one of the northernmost offshore oil-drillings on the planet, but Statoil says it is not dangerous and difficult to drill in the Arctic.

«Drilling the Barents Sea is little different from the rest of the Norwegian continental shelf, where we been safely exploring for oil for nearly 50 years,» the company argues and points to the 130 wells already been drilled in the Barents Sea with no serious incidents.

«Even so, we have upgraded our emergency preparedness significantly.»