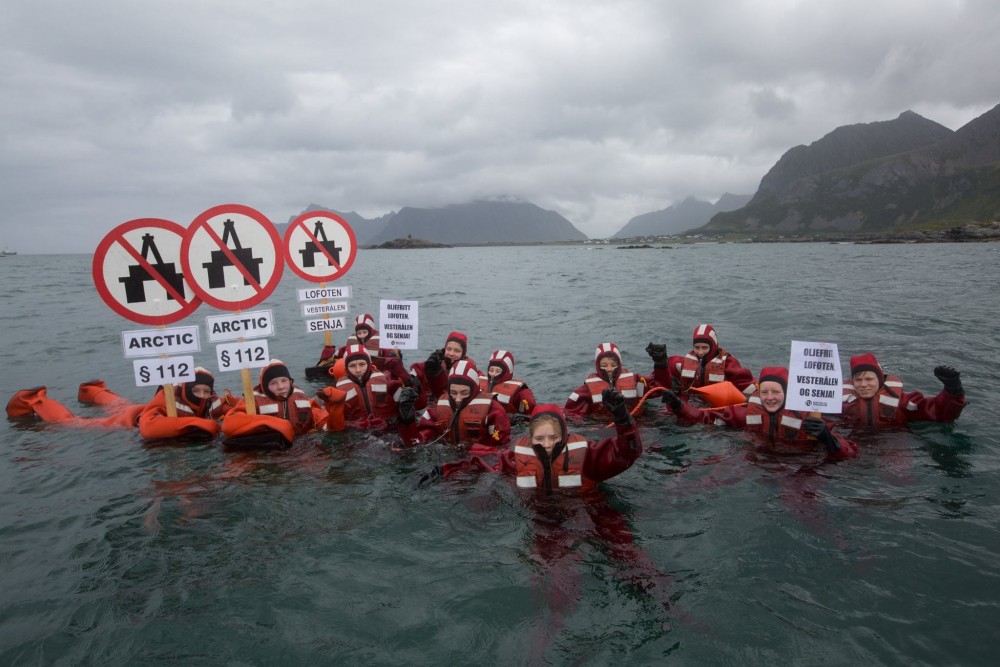 Members of Nature and Youth practicing how to stop oil platforms in the waters outside Lofoten archipelago in Norway. Photo: Nick Cobbing / Greenpeace

«We are ready to smash the oil-industry’s wet Lofoten dreams,» says Ingrid Skjoldvær, head of Nature and Youth at the opening of the organization’s summer camp.
Read in Russian | Читать по-русски
By

Possible opening of the waters outside Lofoten archipelago for oil-drilling is one of the most controversial environmental issues in the on-going Norwegian parliamentary election campaign.

The current coalition Government, as well as the largest opposition party, are in favor of impact assessment studies for some of the areas, while several of the smaller parties are voicing strong resistance.

The environmentally sensitive Lofoten archipelago is one of the last areas along the coast of Norway not yet opened for oil-drilling. Further north, in the Barents Sea, companies like Statoil are currently running a test-drilling campaign larger than anytime before.

A possible impact study of oil and gas activity outside Lofoten is the first step for opening the area to exploration and production.

«We are going to fight with tooth and nail to keep the oil industry’s abrasive fingers away from our seafood pantry,» Ingrid Skjoldvær says. Nature and Youth is Norway’s largest youth environmental organizations and this year’s summer camp got visitors from several other European countries, including Northwest-Russia.

Also, activists from the Niger Delta in Africa and Standing Rock in the United States are visiting the Norwegian environmentalists.

The activist camp is aimed to set Lofoten on the world map of important environmental fights.

«We are very pleased to have so many international environmentalists visiting and showing solidarity,» Skjoldvær says.

Greenpeace has anchored its «Arctic Sunrise» vessel near to the camp and has trained the youngsters how to make actions at sea. Dressed up in survival suits, Nature and Youth members jumped into the water holding banners and posters with clear messages that no oil is welcomed here.

Last week, Nature and Youth members were sailing with Greenpeace to the Barents Sea where a protest took place in the water near ENI’s Goliat platform. Goliat is currently the only field in the Norwegian sector of the Barents Sea with on-going oil-production.

In November, Greenpeace Nordic and Nature and Youth will face the government in Court in Oslo, where the new Barents Sea drilling will be subject to a historic climate lawsuit. They argue that granting licenses to open a new oil frontier breaches the Norwegian Constitutional right to a healthy and safe environment for current and future generations and contravenes the Paris Agreement.

“It is amazing to experience the global support for our lawsuit in Norway. The government knows that burning oil causes climate change, and there is already more oil than we can afford to burn. They know burning oil contributes to the melting of Arctic ice and increases the risk of extreme weather, like typhoons and droughts, putting homes and families in danger. Still they have just opened a new, Arctic oil frontier. These reckless oil drillings needs to be stopped,” says Nature and Youth leader Ingrid Skjoldvær.

Last year, Oil Minister Tord Lien, strongly argued to open Lofoten for oil-drilling. «The lower the oil price, the more likely with production in the Lofoten waters,» the minister said.

Although both parties in the Government, the Conservative Party and the Progress Party, are pro-oil in Lofoten, the two smaller government support parties, the Liberals and the Christian Democrats are strongly against drilling in the north and agreed to support the minority government only as long as the Lofoten oil is left untouched.

In a poll published by the newspaper Dagbladet on Thursday, 44% of the respondents answered «yes» to the question about being willing to limit Norwegian oil production in order to reduce emissions. 42% said «no» while 15% haven’t made up their mind.