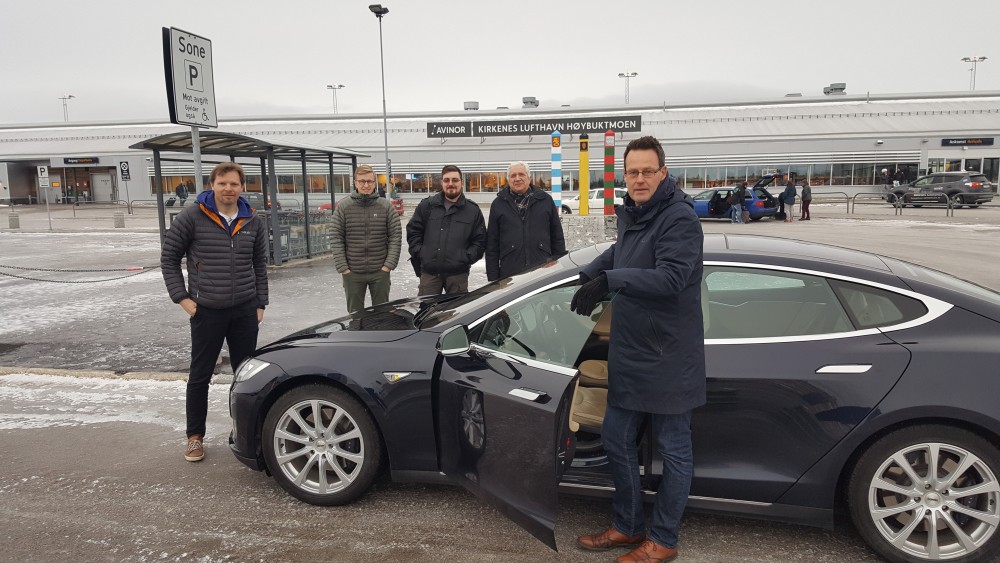 Bellona teams up with regional authorities to see how and where charger should come between Murmansk and the border to Norway.
Read in Russian | Читать по-русски
By

There are already several electric cars in Murmansk, but they can’t make it to Norway without charging the batteries. European Highway E105 runs some 200 kilometres from Russia’s Arctic capital on the coast of the Barents Sea to the Norwegian border in the west.

Most of the distance, the highway goes through areas with no population and very little infrastructure.

This week, Bellona’s people in Norway and Murmansk team up with Deputy-Governor Yevgeny Nikora in Murmansk to see what is needed and where to get started.

Nikora, a former economic director of Kola nuclear power plant, is a personal supporter of new energy and technological projects on the Kola Peninsula.

At Titovka, halfway between the border and Murmansk, a little road café is a popular stopover for drivers on their way to or from Norway. The challenge, however, is lack of electric supply grid. The café today get its electricity from a old diesel generator, obviously not an very environmental friendly way to power electric cars.

Yury Sergeyev with Bellona in Murmansk says one question to study is how a nearby power-grid could be connected to the facilities at Titovka.

“The property is owned by some business people and the grid by some others. There are several practical solutions that need to be solved,” Sergeyev tells.

Other possible locations for fast charger stations are the two gas stations in Zapolyarny, a mining town in the heavy militarized Pechenga valley.

“We need two or three fast chargers along the road,” explains Nils Bøhmer. After substanital upgrades on both sides of the border, E105 is today the most modern highway so far north in Europe.

On Sunday, the Bellona team drove from Kirkenes, the border town where E105 starts, across the Kola Peninsula to Murmansk to see what can be done. Tesla is today the only electric car on the market with sufficient battery package to drive the distance in wintertime.

A few months ago, Bellona opened the first charging station in Murmansk, an EVlink Parking AC-722 kW, w type 2 RFID located at the Park Inn hotel. For that, the environmental organization got the Russian Ministry of Energy’s prestigious ENES award for 2017.

“A gift to Murmansk in Russia’s Year of Ecology,” Nils Bøhmer says. Bellona has over many years promoted environmentally friendly energy solutions and electric cars in both Norway and Russia. The organization was the first to drive an electric car in Oslo back in 1987.

By October, more than 140,000 battery cars are on the roads in Norway, not bad for a country with slightly more than five million inhabitants. Transition to electric vehicles continues. The government aims at a 2025 goal when petrol cars will no longer be sold in the country.

Today, there are some four or five Tesla cars in Murmansk, but with no public available fast charger stations in Kirkenes, not even those cars can make a return drive across the border in one day.

Nils Bøhmer could not elaborate on the timeframe for getting what he calls a “corridor of fast chargers” along the road between Murmansk and Norway up and running. “We will have preliminary talks on the time schedule in Murmansk this week. There are numerous technical and practical issues to be solved, but we believe it can be done pretty fast,” he says.

In Kirkenes, where municipal authorities have failed to put up a fast charger, the local business incubator Tivoli North is looking into different options. Finn Helge Lunde with Tivoli North says to the Barents Observer that Kirkenes will be the missing link now as the Russian side gets more fast chargers.

“The next fast charger on the road is in Inari, northern Finland. If we can get one or two here in Kirkenes, it will be possible for more electric cars to drive the three-land corridor from Murmansk, via Norway to Finland,” he explains. Later this week, Finn Helge Lunde will have a meeting with a local power company and discuss possible solutions.