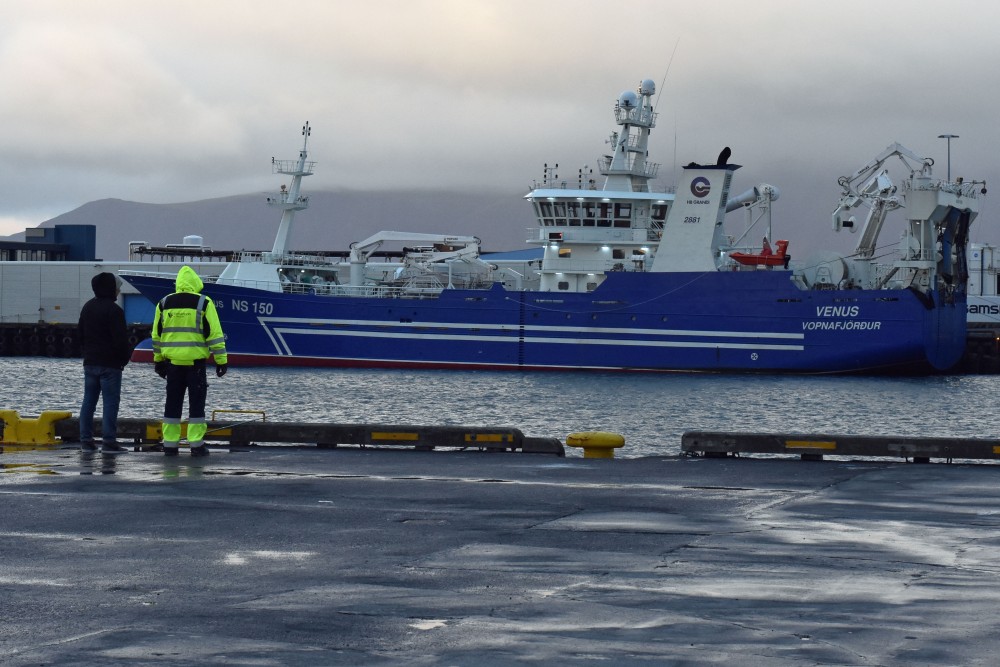 Fishing boats in the port of Reykjavik. Photo: Thomas Nilsen

Once signed, the agreement will prevent commercial fishing in the high seas of the world’s smallest ocean for at least 16 years while scientific research is conducted to learn more about its marine life and resources.

“It’s the first time an international agreement of this magnitude has been reached before any commercial fishing takes place on a region of the high seas,” Dominic LeBlanc, Canada’s Minister of Fisheries, Oceans and the Canadian Coast Guard, said in an emailed statement to Radio Canada International.

“Under this legally binding agreement, all parties agree that no commercial fishing will take place in the high seas portion of the central Arctic Ocean while we gain a better understanding of the area’s ecosystems, and appropriate conservation and management measures can be established.”

Karmenu Vella, EU Commissioner for the Environment, Fisheries and Maritime Affairs, said the agreement “will fill an important gap in the international ocean governance framework and will safeguard fragile marine ecosystems for future generations.”

Officials from the so-called Arctic Five – Canada, Norway, Russia, Denmark (Greenland and the Faroe Islands), the United States – reached the agreement with officials from the major fishing powers – Iceland, Japan, South Korea, China and the European Union – during the sixth round of negotiations in Washington D.C.

Inuit from Canada, Greenland, the Russian region of Chukotka and Alaska represented by the Inuit Circumpolar Council are also part of the agreement.

“Together we have taken a strong proactive and precautionary approach to potential fishing activities in the central Arctic Ocean as climate change continues to have a major impact in the area,” LeBlanc said.

The melting polar ice cap is opening up this once frozen frontier to fishing, shipping, resource development and other interests, he said.

Although commercial fishing has not yet begun in the Central Arctic Ocean, increased melting of Arctic sea ice in recent summers has resulted in open water in up to 40 percent of the area covered by the agreement, according to the U.S.-based conservation NGO, Ocean Conservancy.

“This precautionary action recognizes both the pace of change in the Arctic due to climate change as well as the tradition of Arctic cooperation across international boundaries,” said in a statement Scott Highleyman, vice-president of conservation policy and programs at Ocean Conservancy who also served on the U.S. delegation negotiating the agreement.

“This will be the only ocean in the world that humankind have agreed to not fish in until we have a scientific understanding of what’s there and the management regime under which to operate,” Taylor told Radio Canada International.

“It’s the only ocean left that hasn’t been fished in and we finally, for the first time ever agreed to do it this way, to do it differently from what we have done everywhere else. Even in Antarctica we haven’t done this.”

Throughout the negotiation process, federal officials had engaged with Inuit organizations, including representatives of the Inuit Circumpolar Council who were on the Canadian delegation to the negotiations, as well as territorial governments, the fishing industry, and environmental groups, to seek their views and input, said LeBlanc.

“The final text recognizes Arctic Indigenous Peoples’ interests, the value of Indigenous knowledge in decision making, and provides for their inclusion in the process moving forward,” LeBlanc said.

The accord comes two years after the five Arctic coastal countries – Canada, U.S., Russia, Norway, and Greenland/Denmark  – signed a moratorium on fishing in the central Arctic Ocean until there was sufficient science and appropriate management in place.

Then, the so-called Arctic Five invited the likely countries that would be involved in such a fishery, countries that have a history of distant water fishing – the European Union, which negotiates fisheries as a block, Iceland, Japan, South Korea and China – to work on an agreement of some kind.

The initial term of the agreement is 16 years after which it will automatically be extended every five years unless a country objects or until science-based fisheries quotas and rules are put in place.