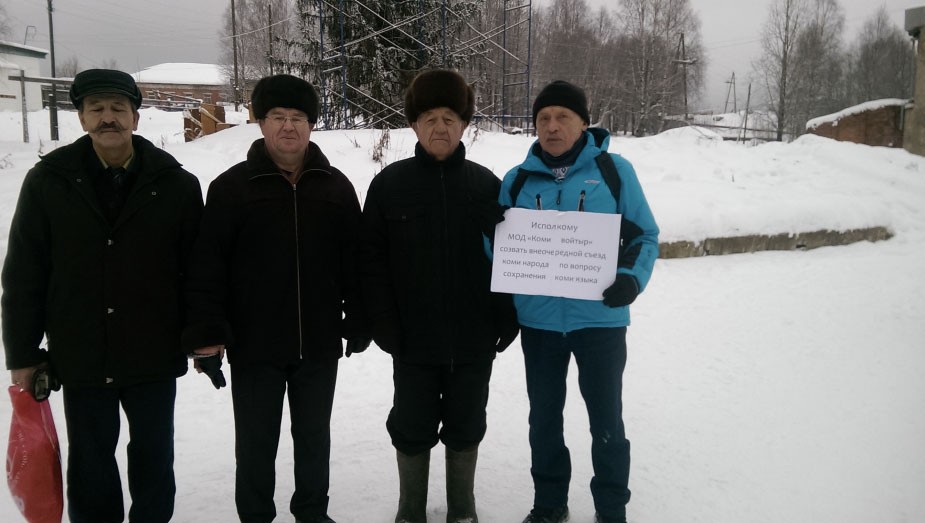 Residents in two local villages joined the Week of Protest, an initiative by environmental group Save Pechora.
By

Text by Elena Solovyova, 7x7-journal, photos by Save Pechora and 7x7

According to Save Pechora, residents of two villages in the Usinsky and the Udorsky district joined the Week of Protest announced by the public organization. On December 24, about 30 people attended rallies against pollution of nature and in support of the Komi language.

Residents of the village Shchelyabozh regularly face oil spills and in their speeches they focused on the state of local environment.

Deputy Chairman of Save Pechora Ivan Ivanov, who kept contact with the protesters, told «7x7» that almost none of the workers at the village school, kindergarten and hospital attended the rally, although it was coordinated. One of the organizers of the rally, cook at the local school Nadezhda Kaneva named the main demands of the rally: to halt seismic works, to oblige oil companies to replace old oil pipelines, and to preserve the Komi language at the state level.

Local resident Valentina Kaneva reproached the deputies of the State Council of Komi that they did not protect the interests of their voters when they rejected the referendum to replace obsolete oil pipelines and approved a referendum on the transfer of the republic capital. The latter, according to her, was needed only for raising the presidential elections turnout in Russia in 2018.

Residents also underlined that there is a necessity for gas analysing instruments for measuring the amount of hydrogen sulphide harmful to health that is contained in local oil and associated gas and enters the atmosphere during extraction. The previous gas analysing instruments were intended only for use in extraction areas and could not measure the amount of harmful gas in open air.

In a telephone conversation, Sergey Makarov told a «7x7» reporter that the company Lukoil-Komi is ready to consider the possibility of acquiring a gas analysing instrument. According to Makarov, a meeting with the population planned on December 15 did not take place due to the inconsistency of the schedules.

Several posters appealed to Russian President Vladimir Putin. For example, one of them said: «Separation of languages by ‘significance’ is the genocide of non-Russian peoples. Putin, you are not our president after this initiative».

The protesters referred to the speech of the President on July 20, 2017 at the meeting of the Presidential Council on Interethnic Relations in Yoshkar-Ola, when he said that study of native languages by representatives of different peoples of the country should become voluntary, and paid special attention to the heads of regions.

Residents of the Udorsky district, who came to the rally, unanimously adopted a resolution.

The Week of Protest was announced by Save Pechora, the oldest environmental organisation of the region, on December 17. Members of the organisation argue that regional authorities’s ignored the interests of the republic’s residents when they decided to abolish the referendum banning the use of oil pipelines over 20 years old, that are most often the cause of oil spills. Also, public officials are alarmed by the government’s attempts to make the Komi language optional for study in schools. After the protest actions, the head of the Komi Sergey Gaplikov suspended the order of the optional study of the native language in the republic, but there is still threat of cancellation of his compulsory study.

At the end of November, deputies of the Izhma district appealed to the head of the republic with an open letter in defense of the Komi language.

The first rallies as part of the Week of Protest were held in the Usinsky district. The protesters stressed that the republic has been suffering from oil pollution for many years and that this is one of the most serious problems in the Komi Republic.