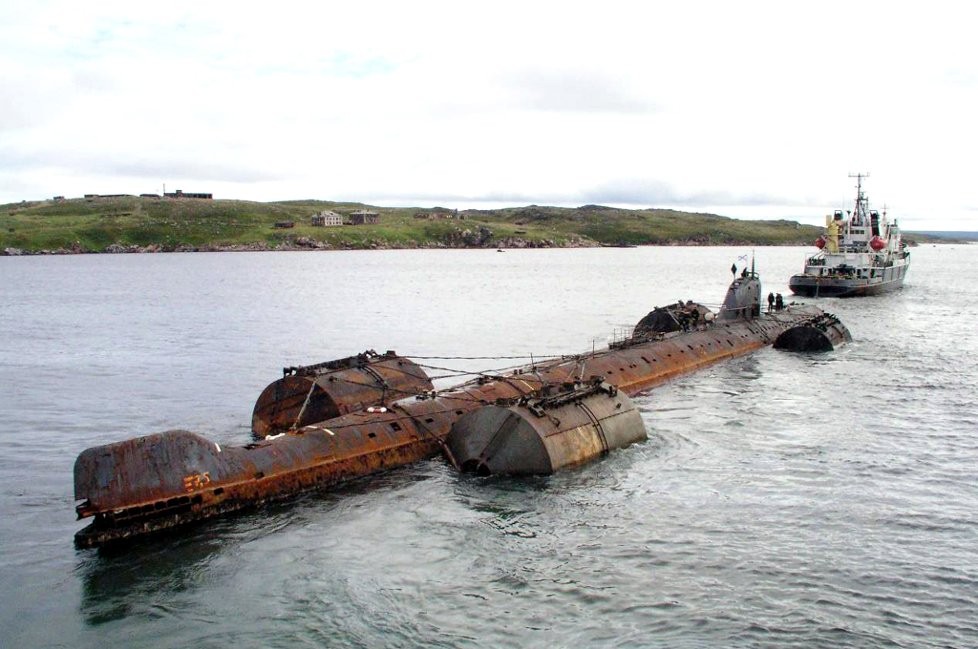 This photo of K-159 was taken just hours before the vessel sank in the Barents Sea. Photo: Bellona

After more than 10 years on the seafloor of the Barents Sea, no detectable levels of radiation are measured from K-159.
Read in Russian | Читать по-русски
By

The scrap o the 55-years old November class submarine should, however, be monitored closely, reads the recommendation in a newly published report by a joint Norwegian-Russian expert group that made measurements near the wreak during an expedition in 2014.

K-159, holding two nuclear reactors with spent nuclear uranium fuel, sank during towing from the naval base Gremikha towards the Nerpa scrapping yard north of Murmansk in August 2003.

Laying at a depth of 246 meters in one of the most important fishing areas of the Barents Sea, just west of the Kildin Island of the coast of the Kola Peninsula, the submarine has caused concern for possible leakages of radionuclides to the marine environment.

During inspection with a remote operated underwater vehicle (ROV), the radiation expert from Norway and Russia discovered damage and break in the outer hull of the submarine. After years of analyzing the samples from the area, both seawater and sediments, the results are now published in the report and show no urgent need to worry.

«There is no indication of any leakage from the reactor units of K-159 to the marine environment.»

Like most Soviet submarines, also the K-159 had two reactors on board. The reactor compartment, inside the inner hull, was not possible for the researchers to examine. Both reactors had been shut down for 15 years before the submarine sank.

Despite being old, the amount of radioactivity in the two reactors is still high and sooner or later the submarine should be lifted, both Russian and Norwegian experts agree.

«Monitoring of the marine environment around K-159 should be followed closely, especially in connection with any future plans for the recovery of the submarine,» the report concludes.

The K-159 is the only nuclear submarine on the seafloor of the Barents Sea. The Kursk submarine, that sank after a huge torpedo explosion in 2000, was lifted and brought to land for decommissioning two years after.

In Arctic waters, the «Komsomolets» submarine lays at 1,600 meters depth in the Norwegian Sea with one reactor and two plutonium warheads. In the Kara Sea, east of Novaya Zemlya, 16 reactors are dumped on purpose, including the entire submarine K-27 and a reactor from the Soviet Union’s first civilian nuclear powered icebreaker, the «Lenin».

Another tiny measurement of radioactive iodine at Svanhovd