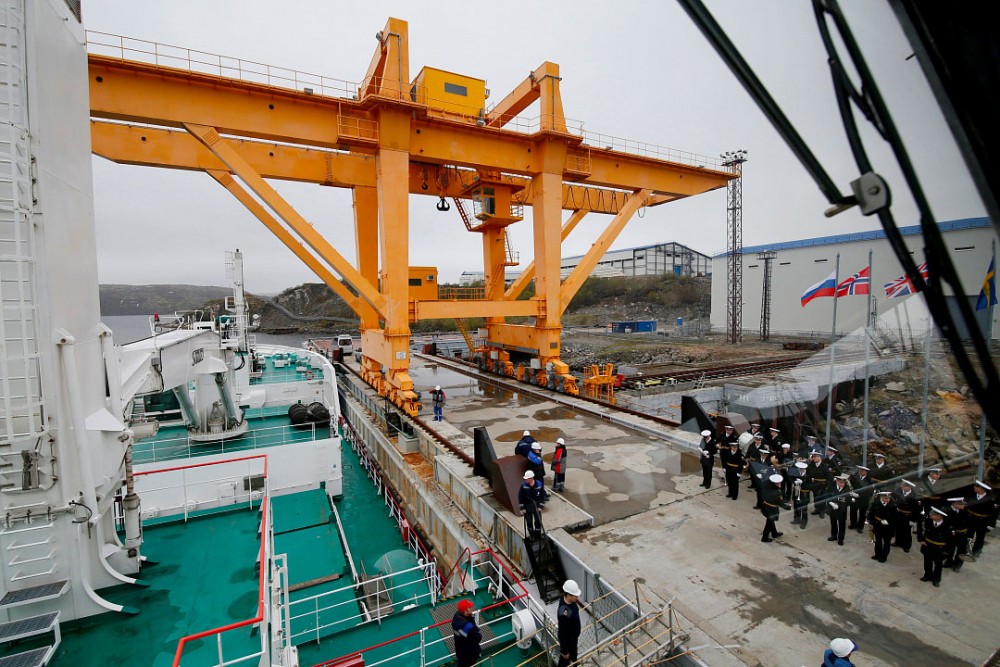 Loading of the ship with the first spent nuclear fuel casks from Andreeva Bay in June 2017. Photo: gov-murman.ru

A load of containers with spent nuclear fuel from Andreeva Bay on the Kola Peninsula will have to wait because of a general ban on transport of dangerous goods in Russia during the Football World Cup.
Read in Russian | Читать по-русски
By

Russia puts priority to safety and doesn’t want any potential lethal substances moving around during the four weeks with World Cup when tens of thousands of football fans are commuting by railway to different cities.

In the north, the ban now delays a shipment of nuclear waste that otherwise would be on its way to Mayak north of Chelyabinsk in the South Urals.

Head of Rosatom State Nuclear Corporation’s international technical assistance project, Anatoly Grigoryev, says three railway sets already have departed to Mayak this year. «The fourth is ready, but we can’t send it because transport of dangerous goods during the World Cup is prohibited,» Grigoriyev says to Interfax in an interview reposted by Rosatom.

From Andreeva Bay near Russia’s border to Norway, the containers with old uranium fuel from Cold War submarines are shipped to Murmansk, where they are loaded over to a set of special rail-wagons. From Murmansk, the train follows Russia’s railway lines south through Karelia towards St. Petersburg and Yaroslav before heading east towards the Urals, a distance of more than 1,600 kilometers.

Mayak reprocessing plant is located between the cities of Chelyabinsk and Yekaterinburg. The last is one of the cities where football matches will be played.

Anatoly Grigoryev assures that the load of nuclear waste containers from the Murmansk region will be shipped to Mayak as soon as the World Cup is over by mid-July.

Last June, a top brass of Russian and Norwegian politicians, diplomates and nuclear safety experts cheered and waved as the first load of containers set out to sea from Andreeva Bay. Since the 1990s, Norway has spent tens of millions of euros to support preparing for the nuclear waste removal from the site to start.

In Murmansk, nuclear safety expert with the Bellona Foundation, Andrey Zolotkov, says this is the first time to his knowledge transport of nuclear waste has been put on break for such reason as a international tournament.

«I don’t recall any such thing. This is most likely due to keeping the railway routes free from such cargos because of all the [football] fans on the move,» Zolotkov says to the Barents Observer. Additional to Bellona, Zolotkov has for many years been working on board the Russian nuclear icebreaker fleet’s transport- and storage vessel «Imandra».

From Murmansk, the nuclear waste cargo-train follows the same tracks, and through the same big cities, as ordinary passenger trains.

«After all, we are just talking about a one month delay,» Andrey Zolotkov explains pointing to the many-years it will take to remove all spent nuclear fuel elements from Andreeva Bay.

A total of about 22,000 such uranium fuel elements where stored in three rundown concrete tanks. That is equal to about 100 submarine reactor cores.

Anatoly Grigoryev with Rosatom estimates it will take about 10 years to remove it all from the Kola Peninsula to the Mayak plant.