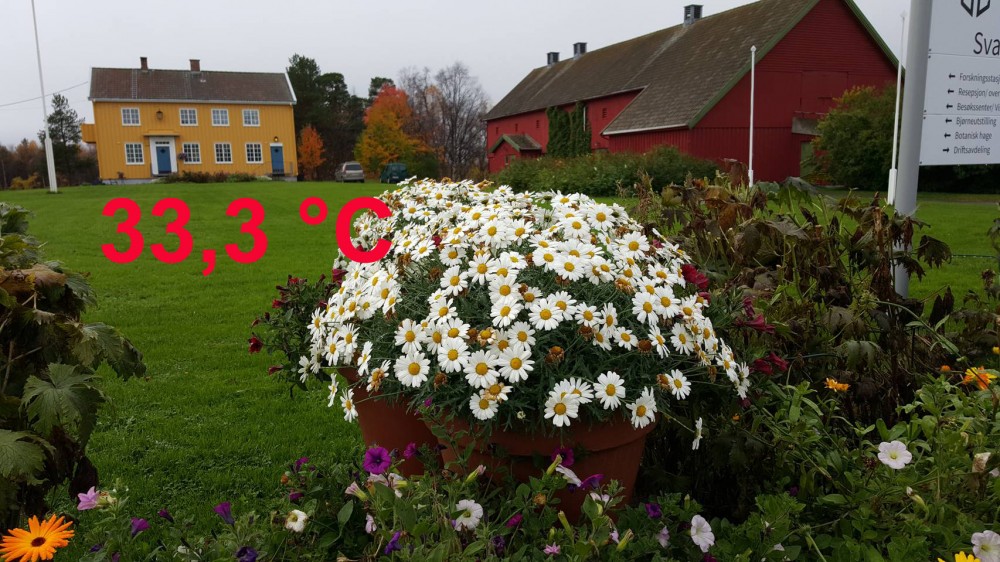 Svanhovd environmental center in the Pasvik valley, just on Norway’s border to Russia, measured 33,3 °C at 5 pm. That peaks the old record of 33°C measured at Banak airport in Lakselv on July 22nd, 1988.

A number of observatories in Northern Norway peaked over 30 on Wednesday, the weather service yr.no reports on twitter. Alta reported 33°C, Mo i Rana had 32,4 °C, Tysfjord in Nordland county had 33,7 °C and even Båtsfjord, on the normally cold-windy Finnmark’s Barents Sea coast measured 30 °C.

Entire inner parts of northern Scandinavia and the Kola Peninsula have experienced an exceptionally heat over the last 2-3 weeks, and now, also Nordland and Troms on coast to the Norwegian Sea can feel the heat. Bodø, a town just north of the Arctic Circle, could for the first time since measurements started in 1953 see temperature over 30 °C.

Norwegians name nights when the temperature doesn’t drop below 20 °C between Midnight and 8 am as a “tropical night”. @Meteorologene could Thursday morning inform about seven locations in Troms and Finnmark qualifying for “tropical night”. Makkaur fyr far north on the Varanger Peninsula had a minimum temperature of 25,2 °C. The others over 20 °C were Båtsfjord, Alta, Øksfjord, Lyngen and Kirkenes.

The heat wave will continue for some more days, yr.no tells.