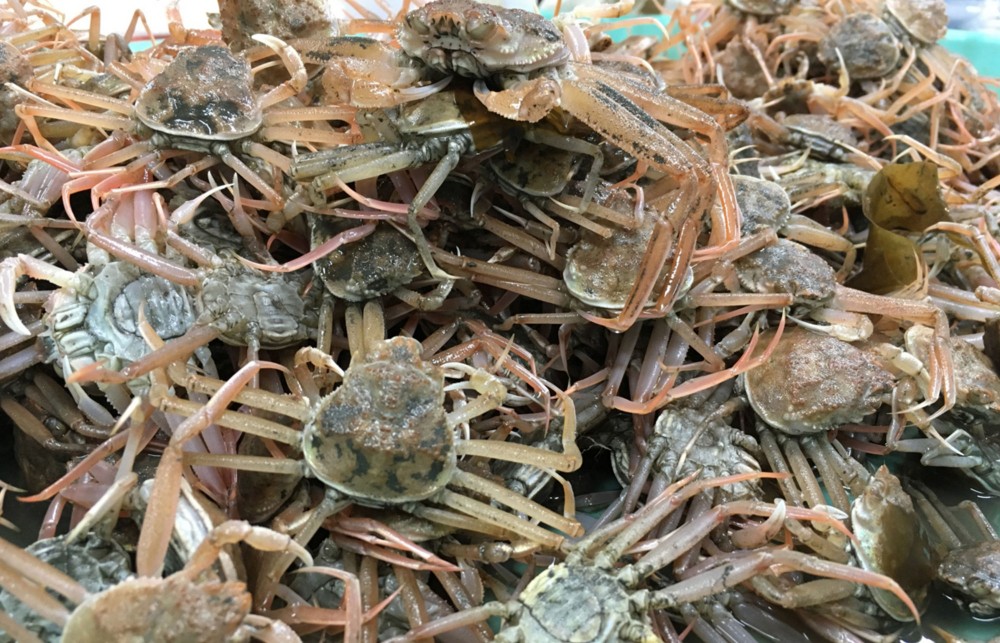 Researchers find a huge influx of snow crabs in areas with dumped radioactive waste in the Kara Sea.
Read in Russian | Читать по-русски
By

The Soviet Union during the 1960s and 70s dumped several hundred containers with solid radioactive waste in the Blagopoluchie Bay in Novaya Zemlya. Back then, these waters were covered with ice overwhelming parts of the year.

Today, that is quickly changing. The bay located in the northern part of the Russian Arctic archipelago  is now ice-free increasing parts of the year. With the retreating ice follow new species.

Researchers from the Russian Shirshov Institute of Oceanology have comprehensively studied the eco system of the bay for several years. Among their key findings is a quickly growing number of snow crabs. In this year’s research expedition to the remote waters, the researchers were overwhelmed by the numbers. According to the institute, the crab invasion can be described «as avalanche».

The number of crabs in the area is now estimated to almost 14,000 per hectare, the institute informs. With the help of underwater photo and video footage, the researchers have studied how the crab expansion is leading to a major reduction in other marine life on the sea bottom.

The deep Blagopoluchie Bay is likely to be the bridgehead for the spread of crabs in the area, the researchers say. A further spread in the other parts of the Kara Sea is imminent, and the Russian Fisheries Agency (Rosrybolovstvo) believe that the Kara Sea will ultimately become an area with commercial crab fishing.

«We expect an increase in the numbers, like we have seen in the Barents Sea,» representative of Rosrybolovstvo, Sergey Golovanov told Interfax.

He adds that the Kara Sea does not border on other countries and that Russia consequently can alone and independently manage marine resources in the area.

In the Barents Sea, the snow crab has quickly expanded and is now found over major parts of the area. In summer 2018, the Norwegian Institute of Marine Research conducted its first expedition exclusively devcoted to the crab. Data collected confirmed the quick and major expansion of the animal, the researchers say.

The expedition by the Shirshov Institute of Oceanology was made with research vessel «Akademik Mstislav Keldysh» and included tests of the sea bottom in the area. No major leakage from the radioactive materials have so far been registered.

Soviet authorities are believed to have dumped about 17,000 containers with solid radioactive wastes in Arctic waters and primarily in the Kara Sea. More than 900 containers are located on the bottom of the Blagopoluchie Bay. Also a number of reactor compartments were dumped, as well as three nuclear subs and other nuclear materials.