The smelter in Nikel is only a few kilometres from Russia's border to Norway. Photo: Thomas Nilsen

“The factory reduces production when sulfur dioxide levels in the town of Nikel exceeds certain concentration. Why shouldn’t they be forced to do the same when their poisonous smoke covers our homes,” Cecilie Hansen asks rehetorically. 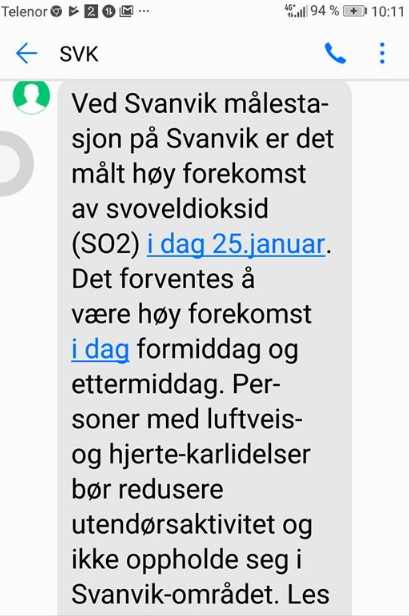 Hansen lives near Svanvik, the area where municipal authorities on the Norwegian side of the border on Friday triggered the health-warning alarm.

“Persons with heart- and cardiovascular diseases should limit outdoor activities and stay away from the Svanvik-area,” the warning sent by SMS to all mobile phones in the area reads.

The same warning is posted on the municipality’s portal.

It is the first time a modern mobile phone warning has been sent in regards to air-pollution in the Norwegian border area.

“It is the highest levels we have seen over the last two years,” says Tore Berglen to the Barents Observer. Berglen is Senior Scientist with the Norwegian Institute for Air Research (NILU) and is in charge of the measuring system in the border areas to the Kola Peninsula. NILU has a branch department at the Norwegian Institute of Bioeconomy Research (NIBIO) centre at Svanhovd in the Pasvik valley.

“The factories in Zapolyarny and Nikel have reduced emission over the last few years, but right now, we have a cloud of sulfur dioxide over the Svanvik area in the Pasvik valley,” Tore Berglen says.

Cecilie Hansen, who lives not too far away from the air-filter station at Svanvik, says the sulfur is easy to smell.

“Over the last days the sulfur smell has been really bad. So bad I actually can feel a sulfur taste inside my mouth when working outdoor,” Hansen says to the Barents Observer.

She calls for a urgent cross-border agreement forcing the factory too reduce production when the wind blows heavy pollution towards Norwegian territory.

“Norwegian authorities must show vigor and leadership here,” she says and underlines such responsibility also must apply to the current mayor of Kirkenes which she claims is way to passive when it comes to protesting cross-border pollution from Nikel.

“We can’t give up before the case is solved. The pollution issue must be brought up at every single occasion.”

“I have brought up the pollution with Norwegian authorities, directly with Russia’s minister in charge of ecology Sergey Donskoy. The owners [of the factory] must be hold responsible,” Rune Rafaelsen says to the Barents Observer.

He says the only positive now is that the direct warning by mobile phones to the people in the area worked as planned.

Pollution from the Nikel-plant has been a torn in Norwegian-Russian cross-border relations for 30-years.

Tore Berglen says the situation has improved, pointing to both the closure of one the three furnaces in Nikel and technological modernization of the briquetting plant in Zapolyarny.

“However, over the last two weeks we have measured pollution levels over the maximum criteriase two times. First time on the night between the 13th and 14th of January, and now on Friday,” Berglen tells.

On Wednesday this week, the levels in Nikel and Zapolyarny were observed to be more than 10 times higher than maximum allowed and Roshydromet warned the factory that reduced production could be enforced.

In Murmansk, the environmental watchdog Bellona follows the situation with worry.

“I would say that according to Russian weather forecast agency, the weather conditions are very bad for production, and the maximum concentrations of SO2 in Nikel are much higher than allowed for several days,” says Bellona’s Anna Kireeva in a Skype conversation with the Barents Observer.

“In a larger scale the company decreases its emissions, but it shall do something about the concentrations in the atmosphere,” Kireeva explains.

UPDATE Friday evening: NorNickel stopped the converters at the melter in Nikel Friday evening after the media-attention. The furnaces are currently not melting nickel and are places in “hot reserve” RBC reports after talking to the management of the plant.