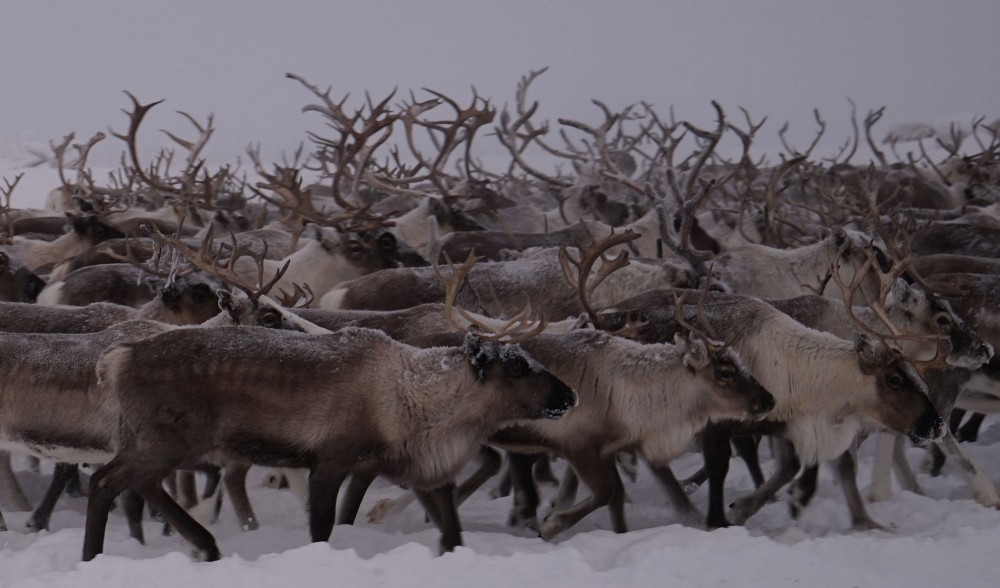 In the Murmansk region, reindeer pastures and wintering grounds for breeding animals have been leased to VIP hunters

The Sámi, an indigenous people living in the Murmansk region, have made an appeal to the Russian president to protect its ancestral lands from VIP hunters. A telegram was sent to the Kremlin on January 28 and a copy went to the regional governor. Residents of the villages of Krasnoshchele and Kanevka are complaining about the regional ministry of nature for basically donating the traditional migration grounds of the domestic reindeer herds for use as a hunting ground for Belgorod entrepreneur Alexander Orlov, owner of the “Yasni Zory” brand and numerous other hunting grounds. Orlov, known as the “Chicken King” is ranked 198th in the Forbes Russian rating and his fortune last year was estimated at half a billion dollars.

The disputed 727 sq/km territory is in the southern part of the Lovozero region along the Ponoi River and borders with the regional nature reserve. This is where the Sámi and Komi-Izhmians live in close proximity. On January 16, the ministry leased the land to the non-commercial partnership “BEZRK Hunting Club” for 30 years. The founder of the club is Orlov and the club is registered in the Vvedensky Belgorod region.

According to local residents, Orlov is a frequent hunting guest in the region and has allegedly been sited for poaching. There are no official confirmations for this such as any official written protocols but according to the local residents’ version of the story, this is probably because the Ministry of Nature and the hunting inspectorate have always accompanied Mr. Orlov on his hunting trips.

Poaching has been the scourge of the region and in the 90s, both wild and domestic reindeer populations were almost completely wiped out when they were at the mercy of the impoverished locals. The police turned a blind eye to subsistence hunters and to the military who would do their hunting from the air.

As a result of the uncontrolled shooting, the domestic herd was reduced from 76,000 to 55 thousand head and four of the 6 registered farms went bankrupt. At best there are only a few thousand wild deer now. Official data has the number at 6,500 but according to experts, the number is much less. The western population of wild reindeer has entered the regional red book of endangered species and though the eastern population is not as bad off, a moratorium on hunting is in effect.

There was some shooting allowed in 2016 when a bureaucratic misstep allowed 71 licenses to be issued. The ministry allegedly forgot to submit the necessary documents to extend the shooting ban on time. But thanks to the resulting media scandal, the ban was renewed and  Elvira Makarova, then the Minister of Ecology of the region, was dismissed and a criminal case is currently being heard in court. Reindeer hunting is prohibited until July 2020 and the Ministry of Environment says that it will begin preparing documents for the extension of the moratorium in six months.

But who protects the herd also owns the heard. According to Dmitry Ruusalep, the regional Minister of Natural Resources, another real reason for leasing the land was that there is no longer any real way to police it. There used to be more than fifty hunting inspectors on their staff but now, there are only 9 for the whole 150 thousand square kilometer region. In essence, the reduction in rangers has been one of the keys to allowing private hunting. By privatizing the land, the state no longer has to carry the financial burden of protecting the region and the numerous huntsmen themselves will take over the duty of fighting with poachers. The state saves face for its past mismanagement and the hunters receive carte blanche. Both sides are happy in this new arrangement.

According to Dmitry Kask, the manager of the regional ministry of environment, new legislation requires that at least 20 percent of the hunting grounds in the region be assigned to specific owners. In the Murmansk region, only 8,2 percent is under private ownership. Orlov, according to his representative, is planning on hiring 25 new rangers, more of them for hunting reserves than the unprotected regions.  Dmitry Ruusalep is convinced that if there is no hunting, the poaching will only get worse.

Andrei Reizvikh is the chairman of the collective farm “Olenevod” and he sits in opposition to the decision. He believes that by giving the land to the hunters, the state is giving the go-ahead for uncontrolled shooting. Reizvikh  points out that the reindeer have been grazing on these lands since ancient times.

«The migration routes of the reindeer have evolved over centuries. The shepherd must follow the deer. It is not the other way around.  The “Olenevoda” winter pastures are along the Ponoy river. And this area will now be under fire.»

«I have been asking them to lease me this land for many years. I asked them to legitimize everything,» says Reyzvikh, who has made his supporting documents available. «But all I ever heard was that there was no money in the budget for a land survey. They would tell me to graze my deer calmly and no one would touch the pastures. And now I find out about these under-the-table decisions, the surveys have already been done and a tenant has been found!»

Reyzvikh also says that there were shady dealings for the lands offered to the major entrepreneur. On January 10, they opened the bidding for the land and two parties participated. The first was the Belgorod club and the other was one particular LLC called Lebyazhye  from the Murmansk region. The founder of the latter is, according to the Federal Tax Service, this same Alexander Orlov. Not surprisingly, no Lebyazhye representative appeared at the final auction. The bidding procedure was declared unnecessary and as a result, the “BEZRK” club received the land without a tender. And it came at the amazingly cheap starting price of 109 thousand rubles (about €1500) for the 72 thousand hectares.  Or one and a half rubles per hectare. There is also an annual 105 thousand rubles fee for the use of bio resources so the rent for the forest land is a completely ridiculous €50 a year.

Ruusalep has another argument. He points out that no one is stopping the reindeer from grazing there or visiting the local renter’s territories and this includes the domestic deer as well. And the moratorium against shooting the wild deer apply to him as well.

Reizvikh insists that in practice, none of these guarantees are enforceable. And he also points out that real hunting in the region without a snowmobile is impossible and hunting with a snowmobile is considered poaching. And as no one would set up a farm here without planning on using snowmobiles, regardless whether any laws would be broken, it is all very clear that no one should expect anything from these beautiful promises.

But Ruusalep believes that the activities of the farm can always be checked or raided if need be. And he asks how 9 inspectors can honestly be strong enough to control the whole region.

Reizvikh, in turn, promises to buy drones and use them to record everything that the hunters do. And he wants to attach a person with a video camera to each person with a gun.

«In fact, you can’t even claim any presumption of innocence,» says Reizvikh. «It would be far too naïve to image a hunting barony and right there in the middle of it, the hunters are carefully stepping around the hundreds of deer free grazing the pastures so as not to, God forbid, disturb the animals protected by the baron’s ownership rights.»

And there is also, in addition to the economic conflict of interest, a conflict with the interests of the indigenous people as well. Locals, such as Andrei Danilov, chairman of the Sámi Heritage and Development Fund, has written that it has always been the tradition of the indigenous people never to hunt on these lands. And the reason for this is not just to avoid disturbing the migration routes. These are exactly the places where pregnant female elk gather to forage en masse during the winters. Exactly in these places. And as the law dictates that shooting female elk is only allowed in the winter, this legal decision seems to be leading to a disastrous massacre.

Rezviykh is excited now. «We don’t even let shepherds on snowmobiles go there. We only go with reindeer. So as not to disturb.»

«Yes, migration routes pass here,» Dmitry Kask objects, «but this is not the calving place.»

Rezviykh insists that he has personally seen up to 170 pregnant elks in this zone. «They are pregnant and ready to give birth. They barely move. You wouldn’t even need a gun to kill them, you could just walk up and cut them with a knife. They would not run away. No one who would go there to shoot should ever call themselves hunters.»

Sámi and Komi-Izhma organizations have sent protest letters against any organized hunting near the Ponoy river to the High Commissioner for Human Rights and the United Nations Small Nations Department, the Council of the Federation, the State Duma, the Prosecutor’s Office and the regional ombudsman. The people have promised to picket if they are not heard.