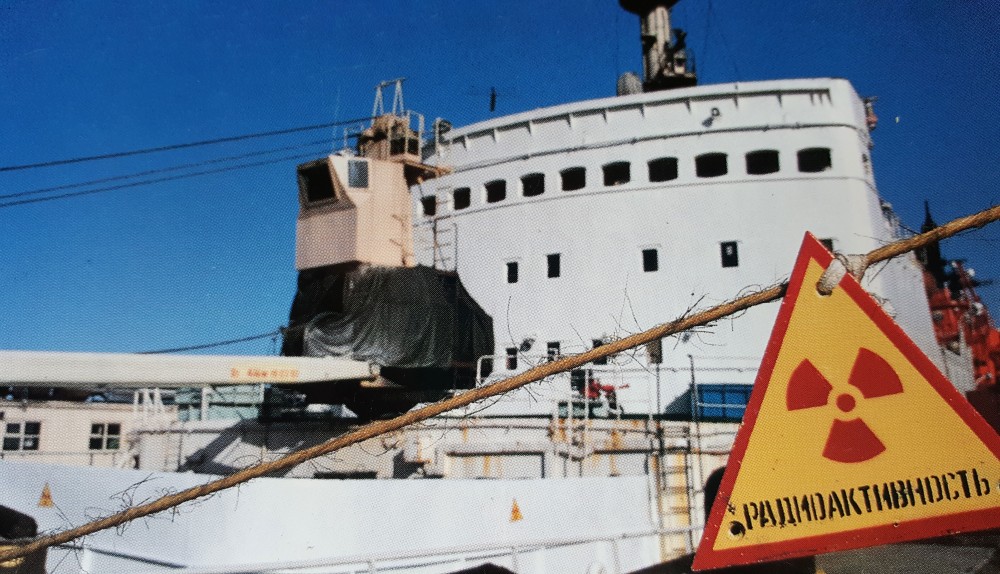 When "Lepse" was moored at Atomflot in Murmansk, the quay was sealed off with radiation warning signs.

The compartment with hundreds of partly damaged spent fuel elements is taken into a shelter to minimize the risk in case of radioactive leakages.
Read in Russian | Читать по-русски
By

It is a milestone for nuclear safety clean-up on the Kola Peninsula. Though, the removal of the spent nuclear fuel elements from the storage compartment from «Lepse» will take time. The work is, to say it mildly, a high risk operation involving uranium fuel so radioactive it could cause lethal dose to workers if something goes wrong.

«Preparatory work for this stage of the disposal of «Lepse» has been underway for the last two years,» Chief Engineer Georgy Neyman of the Nerpa shipyard told Komsomolskaya Pravda.

Phase one of the work, which started last week, is removing the 620 fuel elements believed not to be damaged. The elements will be loaded over to special casks for shipping to Atomflot service base in Murmansk. From there, a special train will take the casks to Mayak reprocessing plant in the Chelyabinsk region in the South-Urals.

The work ahead is the most demanding. Cutting out the radioactive elements is done by using robotics. Inside the shelter, humans should spend as little times as possible.

«The time intervals during which a person can be in the presence of ionizing radiation are strictly observed,» Oleg Khalimullin, deputy chief engineer at Nerpa shipyard said in an interview with the news portal of Bellona. The environmental group in Murmansk has for 25 years worked on promoting a safe disposal of «Lepse».

In the early 1990s, the plan was simply to tow the aging storage ship to Novaya Zemlya in the Russian Arctic and dispose it in the permafrost near the shore.

«Lepse» was built in 1936, sunken during World War II, lifted afterwards and used as a radiological support vessel for the Soviet Union’s first nuclear powered icebreaker, «Lenin» from 1962. After a coolant accident with one of the three reactors on «Lenin» in 1966 some few hundreds of the spent fuel roads were lifted over to the storage compartment to «Lepse» . Radiation levels were high and “sarcophagus” was built over by filling cement.

Both neighbouring Norway and the European Union have finacially and technically assisted Russia with securing the nuclear waste ship and preparing for the work now started.

Expenses for the shelter and robotics are co-financed by the European Bank of Reconstruction and Development.

If all go in accordance with schedule, removing the nuclear fuel from the compartment should be ended next year.