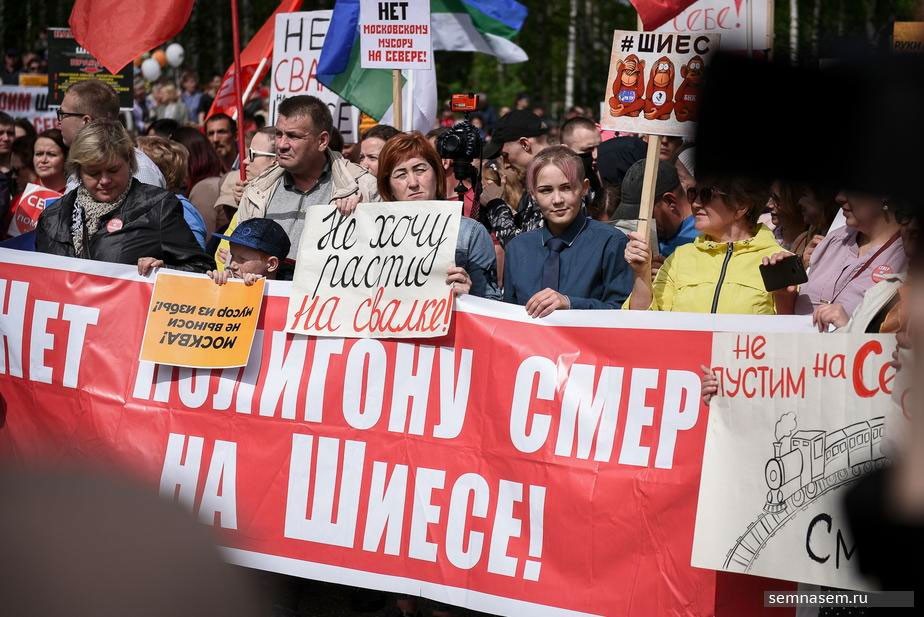 An estimated 5,300 people gathered in the streets of Syktyvkar in a protest against Moscow’s building of a major landfill in nearby Shies.
Read in Russian | Читать по-русски
By

The people that on Sunday assembled in the streets of the regional capital of the Komi Republic demanded a halt in construction of the Shies dump site. They also demanded that the regional governors of Komi and neighboring Arkhangelsk resign.

«This is one of the biggest rallies ever in the history of this city,» activist Viktor Vishnevsky says to 7x7-journal.

About 5,300 people took part in the protest, organizers say. The rally was initiated by the regional Communist Party.

«Tyrmas!» the protesters shouted. The word means «enough is enough» in the local Komi language.

Protests against the huge landfill that is in the making in Shies have been going on for months. And they show no signs of receding. On the contrary. Despite increasing law enforcement crackdown on the protesters, people raise their voices and appear not afraid to making it into the streets.

The landfill is to serve huge volumes of garbage from Moscow households. It is to be transported by train all the way from the capital to the remote forest lands of the Russian north.

Nature in the area is dominated by wild forests and wetlands and environmentalists fear that the dumped wastes could severely damage local and regional environment.

The 5,000 hectare dump site under construction is officially called the «Ecotechnopark» project. Garbage from Moscow is to be packed in briquettes and brought by train and buried. Five trainloads per day are planned and the landfill will be taking Moscow’s garbage for the next  20 years. More than 10 million tons of waste is planned sent north to the Pomorie region.

For weeks, hundreds of protesters have staged rallies in the area of Shies. A camp site with tents and facilities have been built on site and clashes with police and local guards have increased in frequency. The latest brawl took place on the 31st of May, and two activists were then detained by police, 7x7 reports.

Several of the local protesters from Shies took part in the rally in Syktyvkar. Among them were Svetlana Babenko and Marina Pakhtusova from Urdoma, a local village located near Shies.

«The first one to suffer from the pollution will be [the villages of] Urdoma and Madmas,» they told 7x7-journal. «We are against this, we do not want our children to die, we do not want everything created by our ancestors to be ruined.»