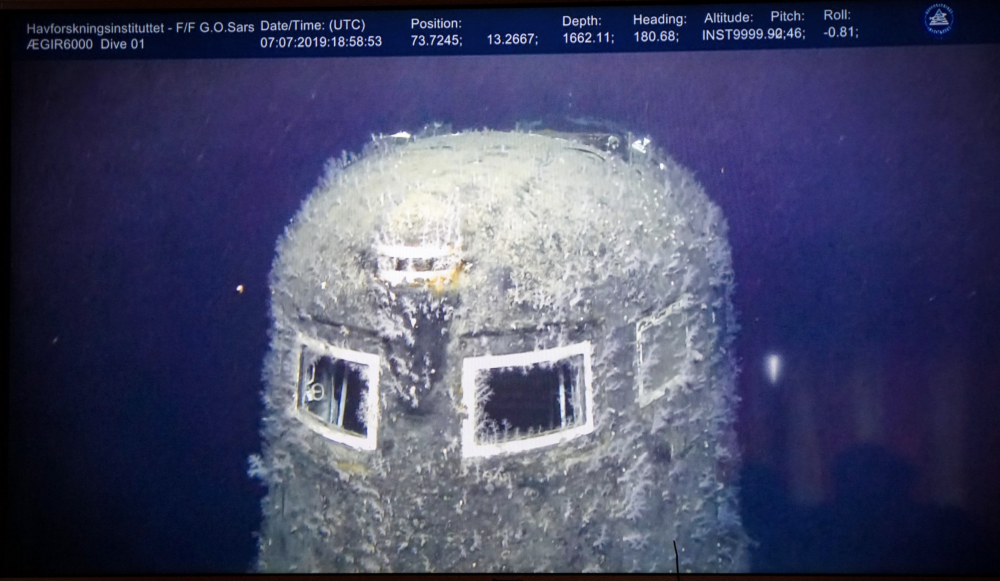 This photo of the Komosomolets wreak was taken by a Norwegian ROV on July 7th, 2019. Photo: Norwegian Institute of Marine Research

Norwegian and Russian researchers sail joint expedition to the site where the submarine “Komsomolets” sank in 1989.
Read in Russian | Читать по-русски
By

The unique titanium hull Soviet submarine “Komsomolets” sank after a fire on April 7th 1989 some 180 kilometres south of the Bear Island in the Norwegian Sea.

41 members of the crew died in the cold water as the submarine sank to a depth of 1,680 meters. This week, Norwegian research ship “G. O. Sars”, sailing for the Marine Research Institute, is at the site with a deep diving remotely operated underwater vehicle (ROV).

“Now we come closer to the wreak than ever before, and get even better sampling,” says expedition leader Hilde Elise Heldal with the Norwegian Institute of Marine Research.

“Komsomolets” has one nuclear reactor and two torpedoes tipped with plutonium warheads. Each of the warheads contains about 3 kilograms of plutonium-239, in diameter about the size of a tennis ball.

With a half-life of 24,000 years, the plutonium poses a treat, although experts say the chances of reaching the food chain is highly limited as there are very little marine life at the depth of the submarine wreak.

In the early 1990s and in 2007, Russian scientists measured small radioactive leakages at “Komsomolets”, including the isotope Cesium-137 from a pipe near the reactor compartment.

Later, Norwegian expeditions to the site has not measured any radioactivity, but unlike the Russian expeditions in the early 1990s which went down with a MIR mini-sub, the Norwegians have not been down deep with a submarine.

The ROV used this summer is named “Ægir 6000” and is a vehicle equipped with both camera and steering arms to take samples.

“This expedition will give us updated and important knowledge about the pollution situation around the wreak,” says Hilde Elise Heldal.

“We have to monitor the levels of radioactivity in fish and seafood. The aim is to document that the environmental conditions in the Barents Sea is good and that seafood from the area is safe to eat.”