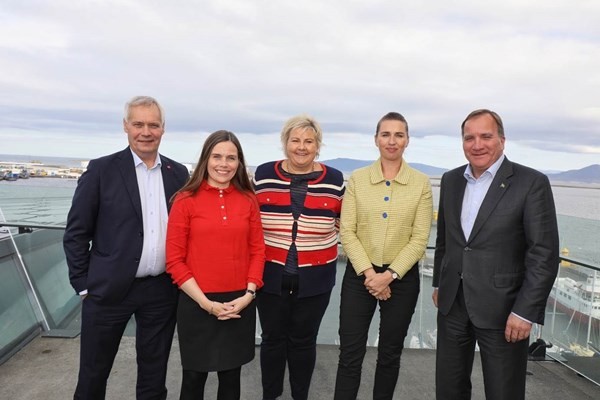 A meeting of Nordic Prime Ministers ended in Reykjavik, Iceland on Tuesday with the signing of a joint declaration on climate action.
Read in Russian | Читать по-русски
By

“The Nordic countries have the opportunity to take the lead in global climate efforts,” said Iceland’s Prime Minister Katrín Jakobsdóttir, who chaired the meeting, in a news release on the Nordic Council of Ministers website. “We’re ready to take on this role.

“We know that it’s difficult to prioritise, but we must accept our responsibility. We have to show people, and not least the younger generations, that we mean what we say, and that we practice what we preach.”

The document was also signed by Nordic CEO’s for a Sustainable Future, a group of 14 companies working to incorporate the UN sustainable development goals (SDGs) in their respective business strategies.

The document reaffirms the Nordic countries’ commitment to implementing the UN Sustainable Development Goals and the Paris climate agreement by 2030.

The document also stressed the importance of closer cooperation between government and business in order to meet environmental targets and  “getting more done, faster, in light of the importance of making progress towards 2030.”

On Tuesday, Iceland’s Prime Minister Katrín Jakobsdóttir said good intentions weren’t enough and that it was time for “strong co-operation and concerted action.”

“I am glad to sense how committed the business community is to sustainability and the government expects a great deal from that cooperation,” said Jakobsdóttir in comments posted on the Government of Iceland website.

“We must strengthen and accelerate progress if we are to reach our goals by 2030. Climate change disproportionately affects the poor and marginalised groups, and it affects men and women differently. Human rights, social justice and gender equality are therefore interconnected with climate change, and any action against climate change must take this into account.”

German Chancellor Angela Merkel was also invited to attend this year’s meeting for discussions on climate change and transatlantic relations. At a press conference, she stressed that inaction on climate could end up being more costly for the global community than doing something.

“Climate change has become visible in the Nordic countries and in Germany,” Merkel said.

“Everyone is able to tell you we’re having unusual weather conditions. The price of doing nothing will certainly be higher than the price of taking action.”

The 17 United Nations Sustainable Development Goals (SDGs) were established by the UN in 2015 to guide international development.

The Paris climate agreement was reached by the international community in 2015.

Its main goal is to keep global temperature increase to less than 2 degrees Celsius above pre-industrial levels.