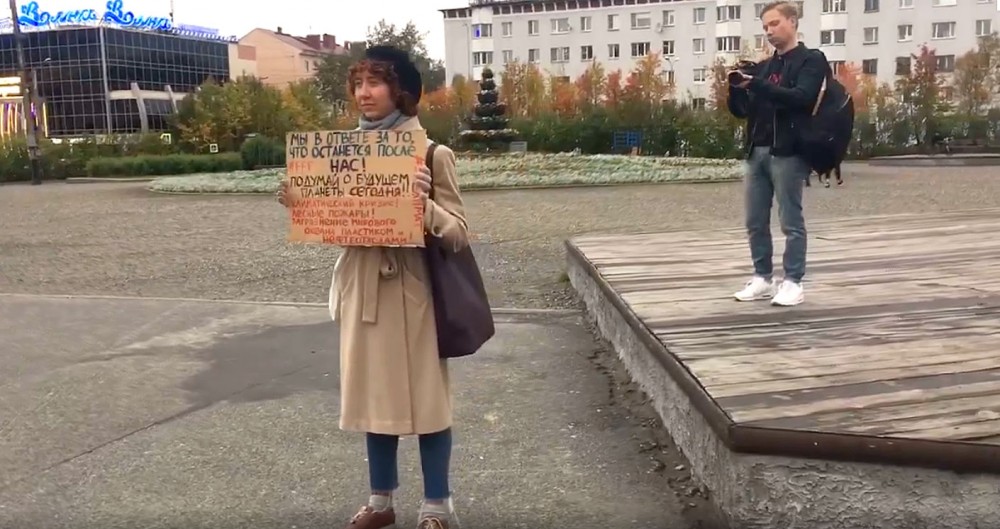 Security officers approached Maria Bogdanova at her workplace and questioned her about a planned climate strike.
Read in Russian | Читать по-русски
By

Bogdanova had initiated a climate protest in downtown Murmansk on the 27th of September and shared information about the event through social media. She had also got the needed permission from local authorities to hold the public gathering.

It did not take long before two FSB officers showed up at her workplace. «They asked me about the people that would participate in the event and about my organizational adherence,» she says in a Facebook post.

The officers reportedly also told her «to think with her head», and read load a set of anti-extremist regulations.

Bogdanova works at the Murmansk Puppet Theater and the two men from the FSB twice approached her at the theater.

According to the activist, the reactions from the FSB has triggered her desire for more climate action.

«The world is threatened by climate crisis and this is no joke!!!» she underlines.

The rally in Murmansk ultimately had to be postponed with one day. On the 28th September, Bogdanova and an associate assembled on the central square of Murmansk.

«We are responsible for what comes after us, think about the future of the planet today!» her poster read.

While millions of youngsters from all over the world make it to the streets in protest against governments’ failed climate policies, the number of rallies in Russia has been few and participation low.

However, the 27th of September saw spawning young climate activism also in Russia.

According to Fridays For Future Russia, there were public climate gatherings in 20 cities.