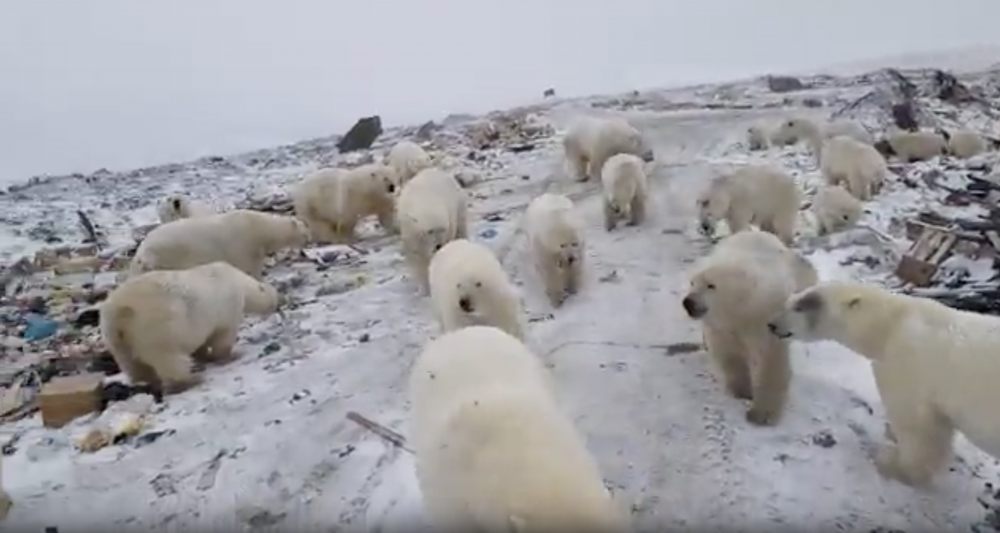 Tens of well-fed, even fat-looking polar bears gathered at the local waste-dump in Belushaya Guba. Screenshot of video posted on Vkontakte / Andrey Marchenkov

In February, photos and videos of well-fed polar bears from the military settlement of Belushaya Guba at Novaya Zemlya made it to the internet and quickly went viral.

Regional authorities declared ‘emergency’ as the bears walked around the houses in the settlement and would not leave. Maybe logically, the local garbage dump  was filled with human food-waste packed in plastic-bags easy to bite through for the bears.

Scientists have determined that up to 25% of the contents in stomach and excrement of polar bears that have been eating at dump sites where people live in the Russian Arctic is plastic, Interfax reports. Ivan Mizin said to the news agency that scientists are seriously concerned about the wide-spread of plastic waste at northern latitudes, including the coastlines of Arctic archipelagoes.

The problem is not limited to the Russian Arctic. A survey from Alaska shows that polar bears are indeed eating plastic waste from dumps, the Hakai magazine reported this spring. An analysis of the stomach contents of 51 polar bears killed by subsistence hunters in the southern Beaufort Sea between 1996 and 2018 confirmed the plastic waste problem. Plastics were found in one of four stomachs.