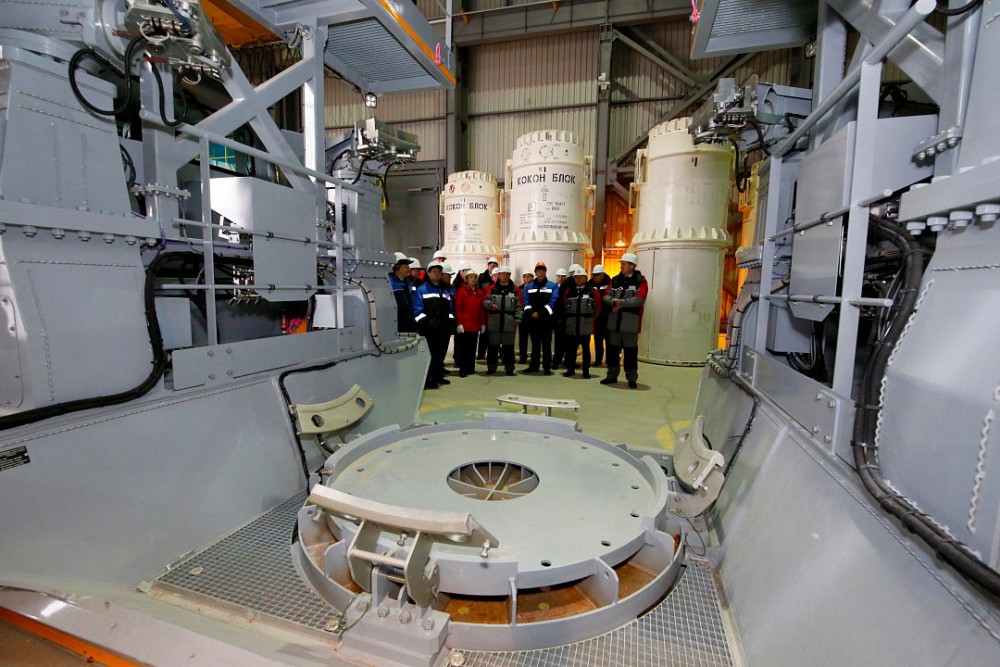 Spent nuclear fuel elements are taken out of the old storage tanks and placed safely into new containers aimed for transport away from the Andreeva Bay. Photo: Gov-murman.ru

A shipment of 14 containers with spent nuclear fuel from Andreeva Bay to Atomflot in Murmansk took place this week.
Read in Russian | Читать по-русски
By

“This is the first time we will pay for removing. The ship was fully loaded. 14 containers with spent nuclear fuel,” says project coordinator Per-Einar Fiskebeck to the Barents Observer.

The removed waste contained about one million Curie (37.000 TBq) of long lived isotopes.

Unloading the 40-years old spent uranium fuel elements from the rundown storage tanks and repacking them to transport containers came with a price-tag of 5 million kroner (€500.000), while the shipment from Andreeva Bay to Murmansk will cost additional 2,5 million kroner (€250.000).

This week’s shipment is the fourth this year, but the first one paid by Norway.

Per-Einar Fiskebeck, an engineer with the County Governor of Troms & Finnmark, has since the 1990s worked in close cooperation with SevRao, Russia’s regional enterprise in charge of cleaning up the nuclear waste site on the western banks of the Litsa fjord.

Here, only 65 kilometers from the border to Norway, the Soviet navy packed away its lethal leftovers. Without too much thought for the costs of future clean up.

In Norway, like in Russia, the demand for action came out of fears for possible radioactive leakages that could have potentially negative impact on the important fisheries in the Barents Sea.

So far, isotopes contamination has only been discovered in the sediments in the near proximity off the shore and not further out in the bay.

Concerns of nuclear accidents and radioactive leakages are also why Norwegian authorities have granted hundres of millions kroner in aid to secure and clean up the site.

After 25 years of cooperation to improve the situation in Andreeva Bay, the Norwegian experts argue that direct financing of practical work is the best way to gain an insight into how Russia deals with the clean up.

“We consider it important to continue this work, both to obtain information about the activities and to contribute to international guidelines for safe handling of this very dangerous material are followed,” says Ingar Amundsen, head of the International Nuclear Safety Section with the Norwegian Radiation and Nuclear Safety Authority.

The two first decades of international cooperation concentrated on improving the infrastructure. Buildings were erected to cover three concrete tanks holding the spent nuclear fuel, both to keep out rain and snow, but also to make sure the removal- and repacking work could take place in safe conditions.

The quay by the shore was rebuilt, a new special crane for lifting transport casks where put in place. Even a new on-purpose designed ship was built, paid by Italy.

In 2017, the first load of containers with spent nuclear fuel left Andreeva Bay towards Murmansk, from where it go by rail to Mayak, Russia’s reprocessing plant north of Chelyabinsk east of the Ural Mountains.

So far in 2019, three shipments paid by Russia and one shipment paid by Norway have left Andreeva Bay.

With one-fourth of the waste removed in two and a half years doesn’t mean the remaining will be shipped away with the same speed.

«The fuel elements lifted out and re-packed so far have been undamaged,” Fiskebeck says. Both tank No. 1 and No. 2 are believed to hold mostly unproblematic elements.

He explains how some of the other elements will be a much more challenging task.

This is high level nuclear waste with radiation levels close to the uranium fuel comparable to the melted fuel rods inside the ill-fated Chernobyl reactor.

Risk-assessments give a clear recommendation: Do not try to lift any of the assemblies before you are sure nothing falls out.

Three different kind of containers to handle damaged elements are now under development and testing, a work Fiskebeck estimates will take all of 2020 and 2021.

He says more Norwegian funding to unload, repack and transport spent nuclear fuel from Andreeva Bay to Atomflot could come in 2020.

Another groundbreaking milestone in the clean up work took place earlier this fall when the retrieval of six abandoned, highly radioactive spent nuclear fuel assemblies from the bottom of Building No. 5 were successfully completed.

Building No. 5 is a former pool storage, where several elements fell to the floor following a water-leakages in 1982. Traces of uranium and other radionuclides remained in the sludge at the bottom of the pool.

The radiation on site was too high for humans to work safely.

“You can’t have humans there. Robotics were needed to do the job,” Per-Einar Fiskebeck explains.

Such remote controlled equipment were made and the six elements are now safely transferred to the nearby storage building No. 151 in Andreeva Bay.

Fiskebeck praises the Russian efforts and SevRao’s dedicated experts working on site. “However,” he adds with a smile; “We have one challenge, I retire so next year there will come a highly interesting job offer for a qualified engineer in Norway that want to team up for this important work.”