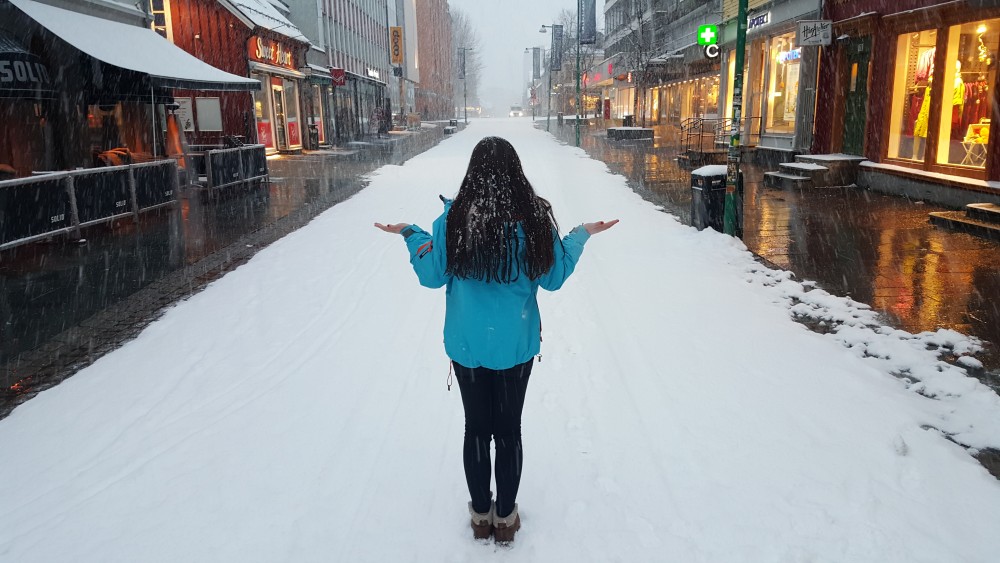 It’s January and raining 400 kilometers inside the Arctic Circle. Climate crisis drastically shortens the winters, a new study by the Norwegian Meteorological Institute says.
Read in Russian | Читать по-русски
By

Kirkenes, on the coast to the Barents Sea, woke up to a rainy Wednesday with +2° Celsius. In Tromsø, Norway’s largest city inside the Arctic Circle, the weather is plus 5° Celsius and rain.

Another day with “holkehelvete” (Norwegian word for slippery-slope-hell) is awaiting pedestrians and traffic on the roads and sidewalks in a part of the country where it normally should have been freezing cold this time of the year.

In the region of Finnmark, 2020 has started off worse than last year ended. Much warmer than previous climate predictions could suggest. December was 5 to 6 degrees warmer than average in the region. The forecast for the coming week is just as grim as the first warm days of January.

The Norwegian Meteorological Institute puts the story in context.

“Tromsø has lost 17 winter days compared with the last 30 years,” the study presented at the seminar Climate Status 2020 tells. A video of the presentation is posted (in Norwegian).

The definition of a winter day is days with temperatures below zero degrees.

Climate Researcher with the Meteorological Institute, Reidun Gangstø Skaland, said that the winter periods will continue to shorten with more and more Norwegians living in areas completely without winter days.

She explained how coastal areas of the country will get more years without temperatures below freezing, and “by the end of the century winters could be totally gone if today’s level of emission of climate gases continues.”

Having lost 17 days of winter already since 1990, the prognoses for the years to come tell how the reality gets worse: Tromsø will only have about 80 winter days in 2050, compared with 120 today.

For Norway as such, 2019 became a year with big weather contrasts and a sever list of climate records.

April had an average temperature 3,3° Celsius above normal and became the driest and second warmest April ever recorded. The highest temperature ever measured in Norway was on July 28th with 35° Celsius in Mosjøen, just south of the Arctic Circle. On the island of Sømna in Nordland, that night never saw temperatures below 26,1° Celsius making it the warmest tropical night ever in the history of measuring temperatures in Norway.

Which records this January will bring remains to see, but one candiatate from Tuesday could be the 12,4° Celsius measured in Birtavarre in Kåfjord east of Tromsø. Such warming is normally what is considered to be a summer day in Northern Norway.

The most dramatic climate changes in Norway, though, is not on the mainland but up north at the archipelago of Svalbard.

More sever warming in the Arctic are seen during the winter periods, the facts from the Meteorological Institute tells. With less sea ice in the fjords and around the archipelago, the warming just accelerates.

Cold winter days, defined as days with temperatures below minus 10° Celsius, are far less today than before. In 1910, Svalbard had 150 such days, while it today in average is only 50 winter days.