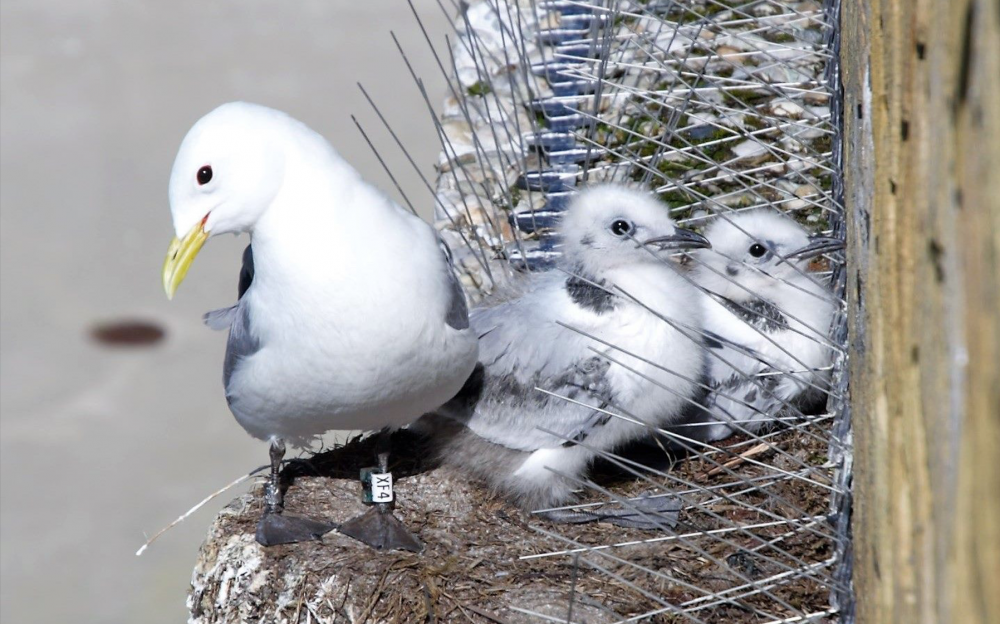 Kittiwake with chicks nesting on a building in Tromsø, despite peoples effort to prohibit it from nesting by using spikes. Photo: Sigurd Benjaminsen / NINA

For humans they are noisy and messy neighbours, but they come for a reason. Stronger storms and wilder weather by the coast give fewer surviving chicks in their natural bird cliff habitat.
Read in Russian | Читать по-русски
By

It is late March and the first kittiwakes have started to look for suitable places to nest. In northern Norway, the noisy seabirds are becoming more and more urbanized.

“The kittiwakes are suffering highly from climate change,” explains Tone Kristin Reiertsen, a researcher with the Norwegian Institute for Nature Research (NINA). Her department in Tromsø is part of the Fram High North Research Centre for Climate and the Environment.

How kittiwakes try to adapt to climate changes is something Tone Kristin Reiertsen literally can see from the windows of the Fram Centre.

A public office building across the street has turned out to be ideal for breeding chicks.

“To see how increased urbanization of the kittiwakes is linked to climate change we have monitored the number of breeding birds and the breeding success in nests on buildings in Tromsø and in Vardø,” Reiertsen tells.

“Bird cliffs on the coast of northern Norway are very exposed to storms from the open sea. With stronger winds, the fewer eggs and chicks survive.”

The researchers at NINA point to calculations from population modelling showing that kittiwakes may disappear from the Norwegian coast within the next 40 years.

To survive, Reiertsen says, spices experiencing large environmental changes, like the ongoing climate crisis, have two choices unless going extinct. “They can adapt where they are, or change their range or distribution.”

Studying the increasing number of breeding kittiwakes in Vardø, a fishing town near Norway’s border to Russia on the Barents Sea coast, gave a clear indication. One of Europe’s most spectacular bird cliffs is the island of Hornøya, just outside Vardø.

For the kittiwakes, towns and human-built structures are ideal. Roofs and small protruding architectural structures are like save havens, protected from bird predators found in the wild.

Tone Kristin Reiertsen and her fellow seabird researchers at NINA are now getting ready for the fieldwork to collect more data of changes in the number of breeding birds, to see how many eggs turn chicks and how many chicks survive.

“All of this together with climate data will provide a higher understanding of how the kittiwakes are changing its biology related to environmental change,” Reiertsen explains.

“The results from our work can contribute to preserving the biodiversity in our coastal landscape.”

Warmer sea temperatures do also indirectly impact sea birds. Capelin for instance, which is high up on the list of preferred dinners for kittiwakes, prefers cold water. With the increased influx of warmer Atlantic waters into the Barents Sea, the capelin naturally moves further north away from the coast.

And when food swims away from the nesting cliffs, that has a negative effect on kittiwakes’ egg investment and the chick’s ability to grow adult.

When water gets warmer, the kittiwakes have to fly further off the coast to find capelin. To make eggs, the birds need much energy, and with less food, fewer eggs are the result.

As previously reported by the Barents Observer, quoting metrological data, the parts of the Arctic Oceans that are not covered by sea ice are now 4 degrees Celsius warmer than normal.

In towns, life isn’t that easy either for the climate refugees. People put effort to prohibit the birds from nesting by using spikes, Reiertsen says, but adds:

“Kittiwakes tend to be a determined creature and is not giving up so easily.”

“Therefore one of the most important of our work is to find solutions for humans and kittiwakes to co-exist in urban space,” she says.

The first nesting pairs came to Tromsø some 5-6 years ago. In 2018, 42 kittiwake pairs were nesting in the city center and in 2019, the number had increased to 115 pairs. Soon, this year’s counting can start.

The Barents Observer has no paywall but independent journalism needs your support more than ever. If you like what we’re doing, please consider making a donation today! Your financial contributions, however big or small, will help keep our independent news coming from the north, about the north.