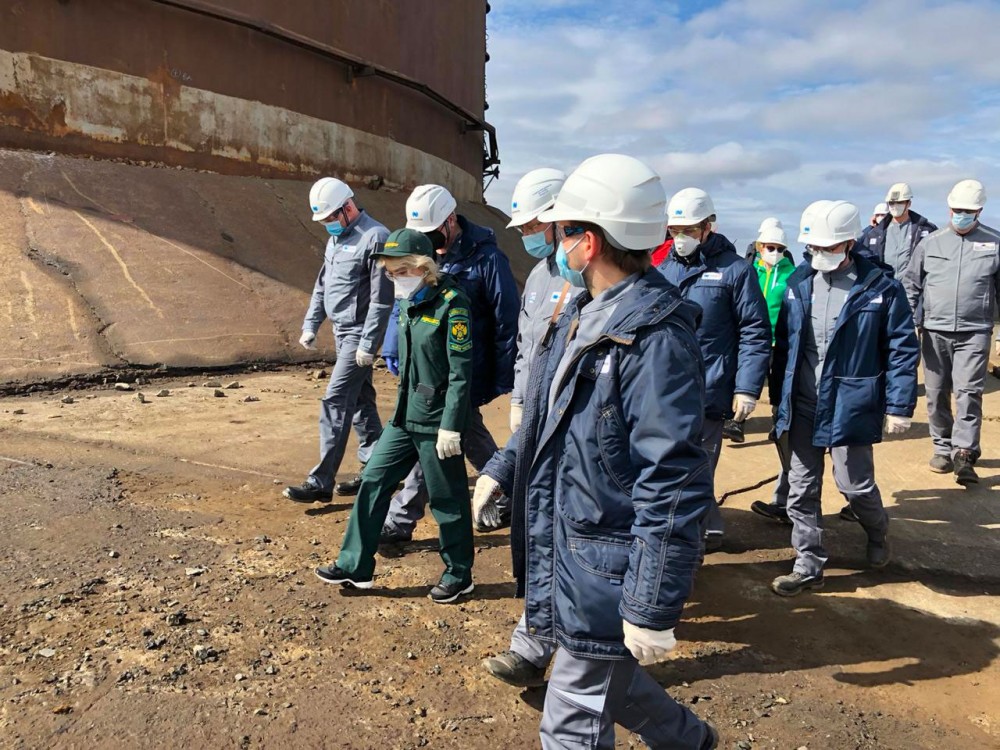 The Russian Environmental Control Authority calls on Nornickel and its subsidiary Norilsk Taymyr Energy Company to close down a major fuel storage park and empty the reservoirs of diesel oil.
Read in Russian | Читать по-русски
By

The warning from environmental control service Rosprirodnadzor comes after last week’s leak of more than 21 thousand tons of diesel oil into the local Taymyr tundra and adjacent lakes, rivers and creeks.

According to Rosprirodnadzor, the environmental catastrophe happed after the concrete foundation on which the reservoir rests began to sink. Following the sinking, the bottom of the reservoir detached from its walls whereupon the diesel oil spilled into the surroundings.

The reservoir park is owned by the Norilsk-Taymyr Energy Company, a subsidiary unit of mining and metallurgy major Nornickel. It was built in 1985 and the reservoirs reportedly underwent inspection and repair in 2017-2018.

On site are another four similar reservoirs, three of which are in operation. They are now a major subject of concern for the environmental inspectors in the area.

In a letter addressed to the Norilsk Taymyr Energy Company, the environmental watchdog now warns that the remaining reservoirs could ultimately get the same fate as the first collapsed tank.

The reservoirs might together hold more than 60,000 tons of fuel oil.

The control authority proposes that the company pumps all the diesel fuel out of the reservoirs and that it carefully studies the technical condition of the facilities.

The work must be completed by 9th August this year, the letter explains.

The major spill happened on the 29th May, but is believed to have been reported to the authorities only on the 31st May. Clean-up operations are now in full swing with more 650 people and 250 equipment items involved, Nornickel informs.

According to the Ministry of Emergency Situations (Emercom), a total of 29 lines of oil booms with a total length of about 2,8 km are now put across affected waters. In addition, sorbent materials have been put on 33 km of river and lake shores.

Consequences for Nornickel are dramatic. In addition to the grave environmental damage in the area, the company has been openly discredited by federal authorities and the Kremlin.

In a video conference on the 5th June, Vladimir Putin expressed strong criticism with Nornickel and its leader Vladimir Potanin.

On the 10th June, three top leaders of the Norilsk Taymyr Energy Company were detained by police. According to state investigators, the company leaders had failed to provide necessary safety at the reservoir park.

The Russian Arctic has over many years been among the regions in the world with the most rapid warming, and climate changes in the area are today increasingly dramatic. Among the changes unfolding is a rapid reduction of the permafrost, which results in major risks for settlements, industry and infrastructure in the region.

Parts of northern Siberia, including the Taymyr Peninsula, are among the area worst affected. Average winter temperatures have over the last decades increased by about five degrees Celsius and the permafrost layer annually shrunk by about 10 cm.

The reservoir facilities in Norilsk hold only a tiny fraction of the volumes of oil and oil products stored across the Russian Arctic. A lion’s share of Russia’s oil production is made in the country’s north and storage facilities, pipelines and terminals are stretched across the vast region.

Potentially, similar spills like the one in Norilsk could soon happen in numerous places across the region, including in nearby oil-rich Khanti-Mansiisk area, Yamal-Nenets Autonmous Okrug, Komi Republic and Nenets AO.