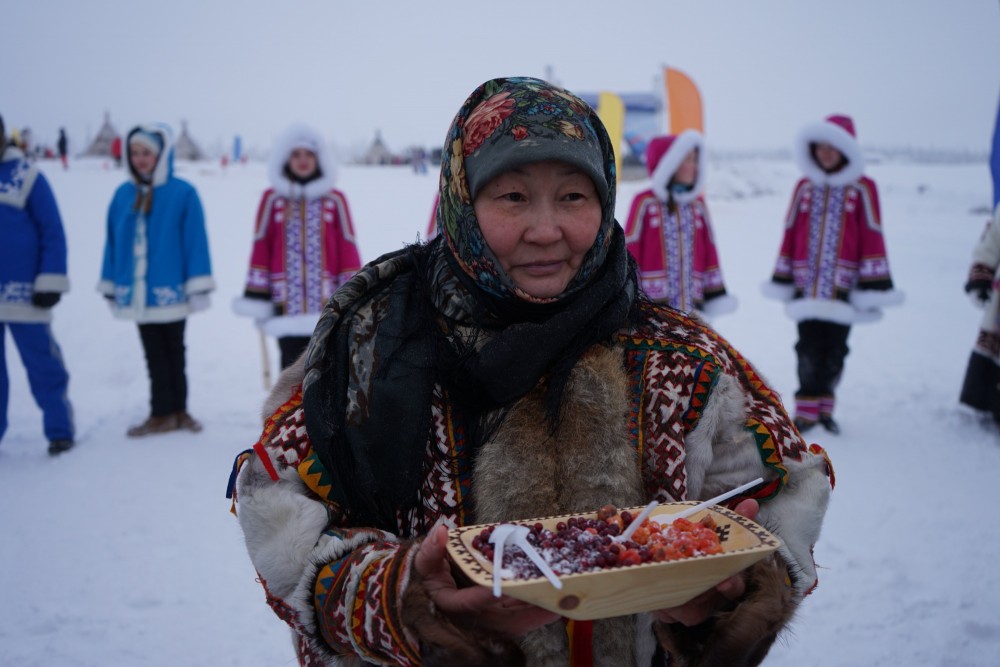 Repression against indigenous peoples is comparable to the first years of Stalin's industrialization. But this time the government is acting in the interests of private capital

116 international organizations and dozens of individuals have signed an open letter to Russian President Vladimir Putin and Foreign Minister Sergei Lavrov demanding that they put an end to repressions against those defending the rights of indigenous peoples. The reason for this was the recent detention of Andrei Danilov, the Murmansk region director of the Sami Heritage and Development Fund. And this has not be the only case of its kind. On the contrary, pressure on activists from among the indigenous inhabitants of the North, Siberia and the Far East is increasing despite the fact that they are practically not even engaged in politics. Their only agenda is, and it is much more mundane, the survival of their small nations and their pressing problems.

From the open letter to Vladimir Putin and Sergei Lavrov:

Against this background of political repressions, which includes the persecution of the independent press and the search for extremists even among schoolchildren and selfie lovers, the pressure on indigenous people seems absolutely absurd. As an example, what exactly made the Yamal police claim that a meeting of reindeer herders in the tundra was a political rally? This is exactly what was stated in the case of activist Eiko Sarotetto. There was no way to ascribe politics to the rally but Eiko was accused of instigating a fight anyway and despite the lack of evidence, was sentenced to three months imprisonment.

And what could stop the state from harassing Yana Tannagasheva, a native of Kuzbass, who fought for the preservation of the ancient Shor village of Kazas? Her father’s house was burned down, Tannagasheva was forced to emigrate and now, the village of Kazas is no more.

Maybe Andrei Danilov is a threat to a country whose entire meaning of existence seems to boil down to one simple thesis: it is necessary to comply with the laws adopted in Russia. Even when the Constitutional Court seemingly recognized that he was right, writing in their judgment “the activist seeks to enforce the laws of the Russian Federation”, nevertheless, he was soon detained and thrown into a cell where a man in civilian clothes came to talk to the Saam and explained how difficult it is for the relatives of overly active citizens…

The Monchegorsk City Court also decided to arrest Danilov and jailed him for five days for refusing to be searched without witnesses. The judge in the decision referred to the norms of the law “On the Police” which allows police officers to inspect citizens’ belongings at mass events. Although the policeman himself fully agreed with Danilov’s testimony during the interrogation, broadcasting that he wanted to inspect the latter’s belongings, the law really obliges that in more detailed procedures, it should be carried out with witnesses, Danilov got the jail stay.

The Monchegorsk judge allegedly did not notice the difference between two completely different actions. The two situations do sound very similar.

Recently, after a year of house arrest, Evenk Arseny Nikolaev, a deputy of the Yakut parliament and the head of the national community, died. The warrant for his arrest was written by officials of the gold mining company that paved the road through the lands of the community. Nikolaev allegedly put pressure on the company, trying to force them to use the services of Evenk carriers. The arbitration considered all the actions of the gold miners voluntary but the criminal case against Nikolaev was not terminated.

Stepan Petrov from Yakutia has twice been named a “foreign agent” and was included in the “register of mass media performing the functions of  a “foreign agent”. Roskomnadzor accused Petrov of not including a “foreign agent” tag in 14 Facebook posts. Desperate, Stepan turned to Mark Zuckerberg with a request to help the “foreign agents” of Russia by introducing an algorithm for automatically labeling their publications.

This is the second wave of repressions against indigenous people in our history. The first was in the early years of industrialization when the Arctic and Siberia were colonized and subordinated to the needs of the great country by the Soviets. In the case in the Murmansk region, the map of the Sami churchyards shows how the indigenous people were pushed into the center of the Kola Peninsula. During that sad period, reindeer herders who got in the way were simply relocated to reservations and the dissenters were sent to the Levashovsky landfill.

During the era of the “Great Terror”, the period of the most massive Stalinist repressions in the USSR in 1937 and 1938, 125 of the existing 2000 Kola Sami were arrested, most of them were shot and 55 people were sent to the GULAG. Only five of them survived. Among those arrested were almost the entire Sami intelligentsia and the compiler of the first Sami primer. The Sami people were too few to fight and submitted humbly.

There were uprisings. The Yamal Nenets flatly refused to hand over their reindeer to the state. They called this action the Mandalada. To stay in the tundra without reindeer is death but for refusing to hand over the animals, they were given ten years in the camps. The verdict was pronounced right on the day of the trial and no particular investigation was carried out. It is curious that the first Mandalada was relatively successful. Its leaders were even allowed to negotiate directly with the authorities. They issued an ultimatum. They demanded the restoration of the rights of their shamans, equality of the kulaks (wealthy gentry) and the poor, the abolition of food standards and the almost complete elimination of Soviet power in Yamal. As a result, the Mandalada itself was bloodlessly eliminated. A second uprising in the forties however was suppressed bloodily.

The Dolgans also rebelled against their designation and being divided into kulaks and peasants.

Here is a fragment of the appeal of the leaders of the Taimyr uprising:

“Recognizing the Soviet government as the power of the working people, without striving at all to overthrow it, we, the natives of the Taimyr National District, from the first days of the organization of such, have begun to experience the burden of unprecedented taxes and pressure from local authorities. Reconstruction of our economy on socialist rails has begun to be carried out at the pace of the central party of the Union and without any consideration for the specific conditions of the North. The imposition of these taxes, payments, levies on furs exceeding actual possibility, incorrect definitions of class stratification, the presence and movements of armed Russians and the numerous excesses of national policy by local authorities among the native population have led to complete indignation.”

The Taimyr uprising was swept away by rifle fire from an NKVD detachment.

Reading about the colonization of the North in the 30s, it is impossible not to draw parallels with today. The operations always begin simply and are seemingly quite fair at first. But any requests, not even demands, from the indigenous people are met with an unexpectedly tough rebuff. Decisions made by the authorities bear the stamp of wild ignorance about the local lands and peoples. One could even assume them illiterate. But yet they have managed to put the northern tribes on the brink of extinction. It is their fight for survival that makes them protest.

And now almost a hundred years later, Russians are again colonizing the Arctic. The hegemony continues despite coverage by mass media and will be remembered forever by those forced to live through it. In the 21st century, Russia sees the arctic with the same hope the Soviets felt for space but without any of the romantic flair. The Arctic is simply resources; oil, gas and platinum. The Arctic is a weapon. The Arctic is power. Colonization is in full swing and no less rigidly than a century ago.

There is a difference however. If the first Arctic colonization was in the interests of the state, the current one, with all the geopolitical talk, only promises enormous enrichment to private corporations. The Arctic is money and the modern state machine no longer serves the ideals of universal happiness. This time, only private interests are being served.

It is this new Arctic agenda that human rights activist Rodion Sulyandziga considers the root cause of the wave of repression against indigenous people. Until the Moscow City Court closed it on formal grounds, Sulyandziga, a member of the UN Expert Mechanism on the Rights of Indigenous Peoples once headed the largest NGO dealing with the problems of the Arctic, the Center for Assistance to Indigenous Peoples of the North. Before that, the Center barely managed to get out of the register of “foreign agents” but in the end, the victory went to the repressive machine. Sulyandziga is convinced that the persecution of indigenous people is connected with Arctic issues:

“The Arctic is only a matter of development for Russia. It is for filling the budget and having access to resources. The indigenous people are not at all against economic development. In fact they are in favor of it.  But we need a balance between the interests of business and the rights of indigenous peoples. Businesses need huge territories but they also need, say, reindeer herders. The state should be the guarantor of this balance and the guarantor of legality in this region. But instead, it only gives the green lights to business and those who oppose it fall under the pressure of the authorities.”

Andrei Danilov draws an even bleaker picture. “To be named a foreign agent, a trip to the mental hospital and criminal court cases; this is all that awaits an activist in Russia.” After this sad conclusion, he must prepare for yet another trial with local officials who are not ready to agree with the decision of the Constitutional Court without a fight. On the same day, he will also be tried again for “disobeying the police”. In that case, Danilov is trying to appeal the arrest he has already served in the regional court. On his Facebook status, there is a quote from a film about the Norwegian Sami uprising against the colonialists: “We must speak even when there is no hope”. That uprising was brutally suppressed but eventually, the Sami achieved some measure of equality. Now, no one can set foot in the Norwegian Arctic without their permission. And it only took 200 years.

The Russian Sami consider themselves the guardians of the North. They do not believe in owning the land. Securing a piece of the tundra or a lake for a family has never meant having the right to use it. Instead they believe it is their duty to protect and decorate their place in the Arctic. It would be nice if we could learn something from them.

This story is originally published in Russian by Novaya Gazeta. It has been translated by the Barents Observer as part of a news sharing agreement