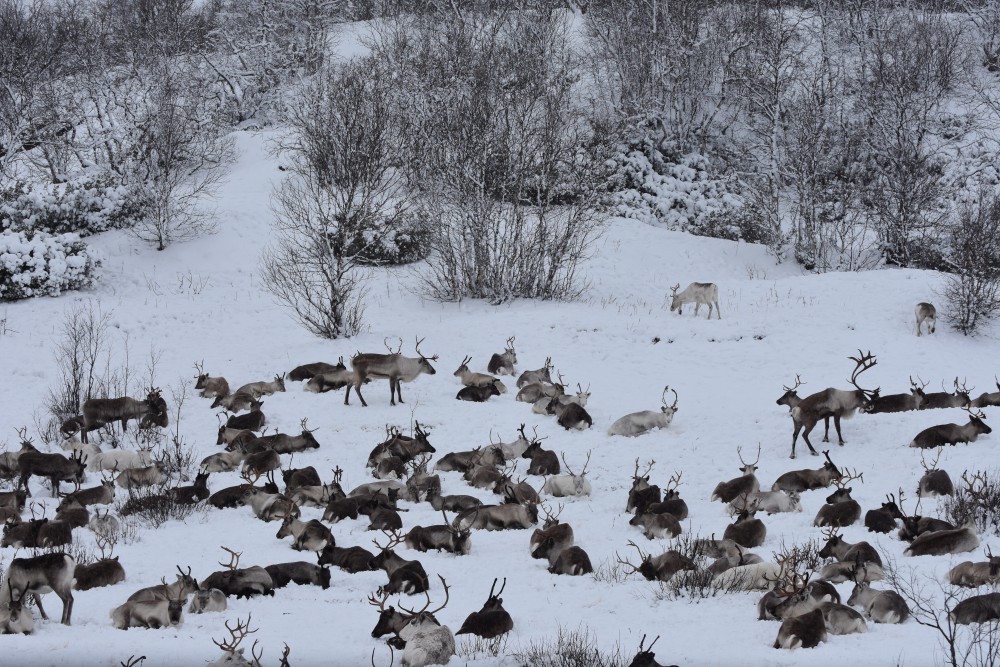 The municipality of Kautokeino is an important winter grazing land for reindeer. Photo: Thomas Nilsen

Conflict potential is rising between Sámi indigenous peoples’ rights and the world’s demand for minerals to develop batteries to power climate-friendly vehicles.

Drill cores taken over several years at the Bidjovagge Mine Project in Kautokeino show what Arctic Minerals describes as “significant values” of the valuable battery metal cobalt and the semimetal tellurium.

The announcement this week comes after the Swedish-based mining company in December last year updated its mineral resource estimate for both copper and gold in the same area.

Arctic Minerals CEO Jonatan Forsberg said in a comment that the findings are “very encouraging” and “adds further value to the overall project.”

He said that the company’s six new exploration permits in the area, granted by Norwegian authorities in 2021, have “excellent potential for further discoveries.”

“Altogether this gives a solid base for future development of the Bidjovagge project,” Forsberg stated.

Both copper and cobalt are in growing demand worldwide as metals used in the sharply increasing production of batteries for electric vehicles. Tellurium, a by-product of copper smelting process, is used in solar panels and is also believed to be a promising component of next-generation batteries due to its ability to support high energy density.

Arctic Minerals estimates that Bidjovagge could give as much as 32,200 tons of copper and 134,000 oz gold. The copper estimate is equal to about one-fifth of the reserves calculated to be available at the planned Nussir mine project on Norway’s coast to the Barents Sea.

Cobalt is primarily used in today’s lithium-ion batteries and around two-thirds of the world’s cobalt is mined in Congo, a country often criticized for pervasive corruption, weak governance and use of child labor.

Search for cobalt in northern Scandinavia has intensified over the last few years and several areas are identified as highly promising, including both Kuusamo and Enontekiö in northern Finland.

Enontekiö borders Kautokeino in Norway and both municipalities are key important for Sámi reindeer herding.

At Bidjovagge, gold and copper were mined in the periods 1970 to 1975 and from 1985 to 1991. In 2012, the municipal council of Kautokeino said no to renewed mining, arguing such activity is not compatible with reindeer husbandry.

Potential conflicts between reindeer herding and mining for copper, nickel, cobalt and other minerals in need for the transition to a low-emission future are on the rise all over northern Scandinavia and in Russia’s northern regions.

“The Sámi are among those who contribute the least to what leads to climate change, yet we are among the first to be affected by the changes,” said Gunn-Britt Retter to the Barents Observer. She is head of Saami Council’s Arctic and Environmental Unit.

Retter tells that the challenges are on the rise.

“Industries such as reindeer husbandry need more flexibility and thus more alternative areas throughout the year to adapt to ongoing changes in the natural environment and climate. Not less space and potential pollution of productive areas, which mines can impair.”

“We in the Saami Council already sees that society’s solution to climate changes are sought to be solved in areas already in use by traditional businesses, like reindeer herding, hunting and other nature-based use,” Gunn-Britt Retter said.

She explains that such increased pressure on culture-bearing businesses and lifestyles contributes to the fragmentation of well-preserved nature areas where the Sámi people for generations have worked in sustainable cooperation with nature.

In an editorial for the circumpolar news-online Arctic Today, Gunn-Britt Retter elaborates on her arguments:

“Sápmi continues to be a source of resources targeted by governments and outside capital. The green shift is nothing more than a continued extraction of resources in Sámi areas, as has been the tradition since the earliest encounters between cultures. The difference is that resource utilization has been given a nice color, green; we call it “green colonization.” We were first colonized by people from outside our lands,  then colonized by climate change itself, driven by people from outside our lands, and are now being colonized a third time by responses to climate change,” she writes.

Arctic Minerals said in a press statement that the company has initiated a process to seek a partner to further develop the Bidjovagge project.