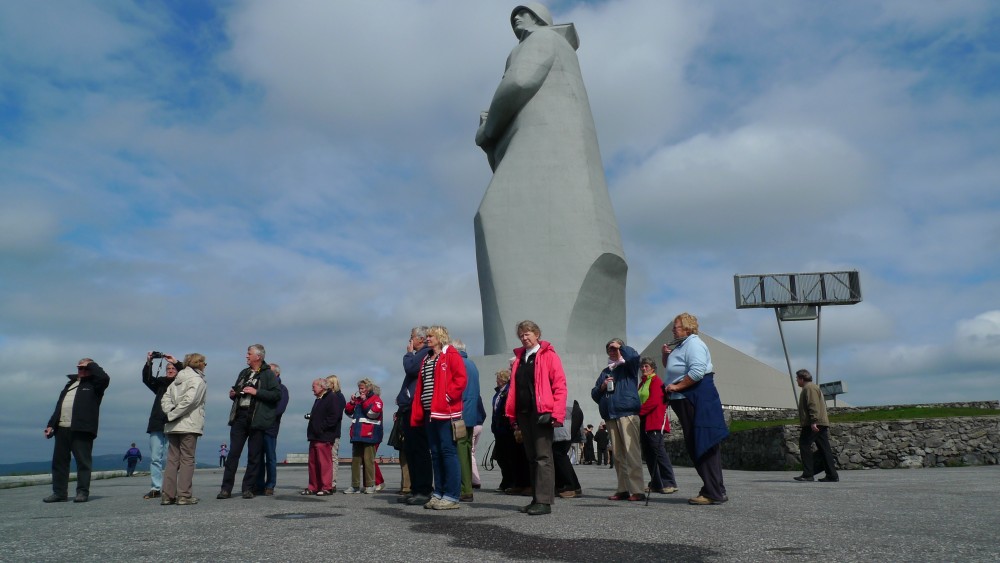 Alosha -the statue of a soldier in a greatcoat with a rifle slung over his shoulder. The height of the pedestal is 7 metres while the statue is 35,5 metres and is one of the city's "been-there-seen-that" destinations for visiting tourists. Photo: Thomas Nilsen

Murmansk eyes many new visitors after the city became Russia’s visa-free window for passengers en route from Norway.
By

The brand new pier in the central harbor of Murmansk is empty and the gate is closed. Nearby, the bluish  building that serves as the passenger terminal is under reconstruction. Another floor will be added and a marine border checkpoint is under way.

When the Arctic Harbor project was launched by the regional Government of Murmansk back in 2010, the plan was to have it opened before the 100-years anniversary of the city. That is next month.

For Murmansk, having tourism as a strategic part of its business, the hope is to have the Norwegian coastal liner Hurtigruten to make port calls to the new harbor. Hurtigruten’s vessels are today sailing between Bergen on Norway’s south west coast to Kirkenes in the north east.

«Extending Hurtigruten ferry line to Murmansk will add extra one or two days to the voyage,» says Vice-Minister for Development of Industry and entrepreneurship of the Murmansk Region Tatiana Russkova.

She tells the Barents Observer that tourists could use this voyage for visa-free visits.

«As there is an international airport in Kirkenes, tourists from different countries could use Kirkenes-Murmansk route as a visa-free window to Russia,» Tatiana Russkova says.

In late July, Russia’s Prime Minister Dmitri Medvedev signed the decree on 72-hours visa-freedom to Murmansk for passengers on ferries. The port of Murmansk is now one of four ports in Russia with a gate for visa freedom. The others are St. Petersburg, Arkhangelsk and Vladivostok.

Vice-Minister Russkova says a working meeting to discuss prospects of Arctic tourism is scheduled for November in Murmansk. Here, representatives of Russia’s Federal Agency for Tourism and different transport companies will attend.

«Extending of Hurtigruten’s ferry line to Murmansk will be at the agenda among other issues,» Tatiana Russkova informs.

Hurtigruten’s communication manager Stein Lillebo told the Barents Observer last month that their planned voyage for 2017 had to be postponed and the cruise liner at earliest have a vessel ready for a test voyage to Murmansk in 2018.

«For us, Russia is still a very interesting potential destination,» Lillebo said.

The company, sailing daily voyages between Bergen and Kirkenes, is now expanding its fleet and will have a stronger focus on expedition cruising in the years to come. Especially in Arctic waters.

A contract for building two new polar cruise vessels was signed in July with an option for another two. Hurtigruten says is will be a leading player within the field of explorer tourism.

That suits Murmansk well. The city’s ambition is to be the gateway to the Arctic for global cruise tourism. The spectacular Arctic archipelago of Franz Josefs land is less than a two days voyage from Murmansk and cruise vessels planning to sail the Northern Sea Route could find the port attractive for start of end of voyages.

During summer season 2015, cruise vessels made 13 port calls to Murmansk bringing more than 10,000 visitors. This summer, only five or six port calls were made.