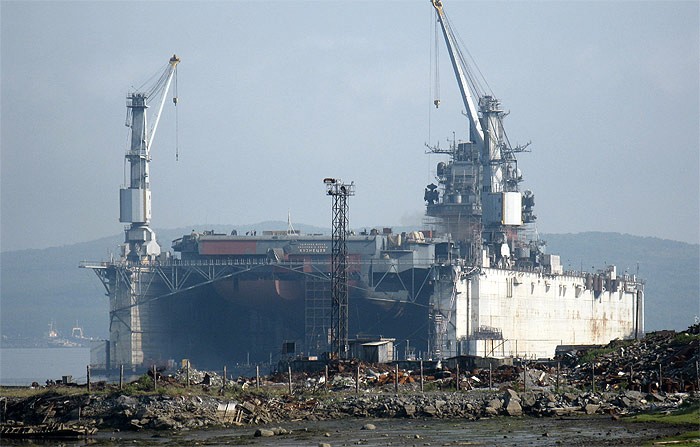 Shipyard No 82 in Roslyakovo is wanted both by Rosneft and the Northern Fleet. Photo: Bloger51.ru

It is not clear when the oil company will start construction of its projected new base in Roslyakovo.
Read in Russian | Читать по-русски
By

Rosneft continues exploration and mapping of Russian Arctic waters, but appears hesitant regarding its plans in Murmansk. The company in 2013 announced that it would take over shipyard No 82 in Roslyakovo, a town outside Murmansk, and develop it to a base for its offshore Arctic operations. The base would have the capacity to annually serve operations connected with as many as 70 geological exploration wells, the company told regional authorities. Up to 2,000 new jobs were to be created.

Rosneft soon got Moscow’s blessing for the project.

Regional authorities in Murmansk subsequently relieved Roslyakovo of its status as closed military town and opened up for regular traffic to the area. Before that, Roslyakovo had been part of Severomorsk, the Northern Fleet headquarter city, and entry was restricted for anyone without a special permit.

Since then, however, little has happened.

Rosneft’s plans in Roslyakovo and the takeover of Shipyard No 82 stirred controversy among Russian Navy representatives. The yard has the biggest dry dock in northern Russia and is one of few places where the Northern Fleet can conduct repair works on its biggest vessels.

In April 2015, more than 300 yard employees wrote an open letter to President Vladimir Putin where they warned against the transformation of the facility from military yard to oil base. This will make it far harder for the Northern Fleet to conduct repair operations of its fleet, they argue. Shipyard No 82 has since it was established in 1947 been a military enterprise.

Regional authorities now appear increasingly frustrated about Rosneft’s unwillingness to reveal an updated time schedule for its project in the area. According to SeverPost, the project could be on the agenda in an upcoming meeting between Murmansk Governor Marina Kovtun and leader of Rosneft Igor Sechin.

Meanwhile, Rosneft proceeds with plans in other parts of the region. Last month, the company secured control over the Lavna terminal, an infrastructure object on the western shore of the Kola Bay. Lavna is end station on the new railway currently under construction, and is projected to get a new major oil terminal facility.