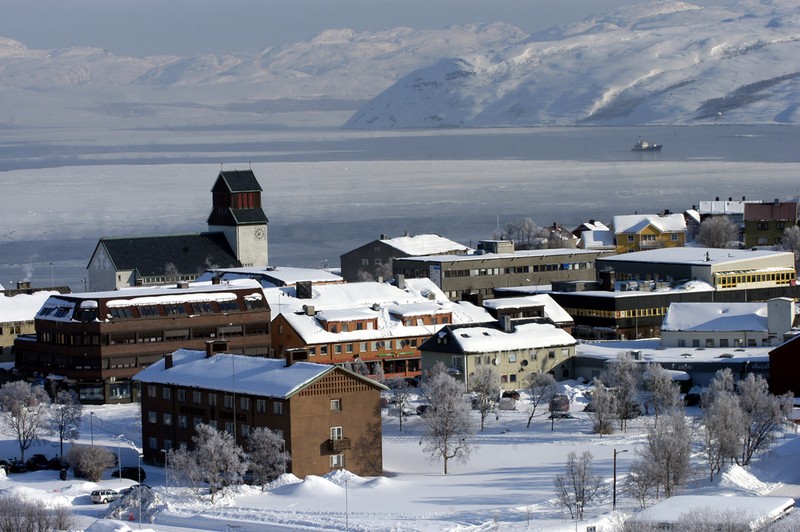 Kirkenes on the coast of the Barents Sea in Norway's northeastern corner. Photo: Thomas Nilsen

Finland’s former President Paavo Lipponen presents plans for a telecommunication highway between Europe and Asia via Kirkenes and the Northern Sea Route.
Read in Russian | Читать по-русски
By

On Thursday December 8, Russia’s Prime Minister Dmitri Medvedev is set to visit Oulu in northern Finland to discuss bilateral trade and economic cooperation with Finland’s Prime Minister Juha Sipilä. Don’t be surprised if the new fiber cable will be central in the talks.

The Russian Prime Minister’s portal says infrastructure and implementation of bilateral investments are up for discussion.

A new fiber optic cable connecting Japan, Asia with Europe via the Arctic will strengthen Russia’s own high-tech development in the Arctic, said by Kremlin to be a top priority for the country’s northern developments.

“A telecommunication cable between Europe and Asia via the North-East Passage would be politically and technologically feasible,” says the report to Finland’s Minister of Transport and Communication. The report (pdf-link), written by Paavo Lipponen and Reijo Sevento, says key countries are Russia, China, Japan and Norway.

The cable would significantly speed up telecommunications between Europe and Asia and respond to global increasing capacity needs.

“The submarine section of the cable would be a connection of around 10,500 km from Japan and China to Kirkenes in Norway and the Kola Peninsula in Russia,” the report reads. From Kirkenes, the fiber cable will cross into Finnish Lapland and further south to central Europe.

“This is very smart,” says Bernt Nilsen, Director of a Datakortet in Kirkenes, the Norwegian branch of the International Computer Driving License Foundation (ECDL).

“This has been our wet dream in many years. Conecting Russian, Norwegian and Finnish net and create a redundant link in Kirkenes,” says Bernt Nilsen to the Barents Observer.

“Kirkenes will then be a connecting hub for global data-communication. That gives us possibility to become a leading node for data centers in Europe, like we have seen in Luleå, northern Sweden,” says an enthusiastic Nilsen.

“With cold climate, renewable hydropower and possibilities for locations in old mining mountain halls, all infrastructure is here. The only thing we lack is a high-capacity fiber cable,” says Bernt Nilsen.

He calls on Norwegian national authorities to join the suggestions from Finland. “This must be considered important national infrastructure and Norway must be hands-on to the project.”

Located on the coast of the Barents Sea, Kirkenes is by China and other Asian countries seen as the nearest access port to Europe if sailing the Northern Sea Route, a shipping lane becoming more and more accessible as the Arctic sea ice melts away. For a seabed data fiber optic cable, sea ice is no problem. Today, Norway’s Arctic Svalbard archipelago is connected to mainland with telecommunication cable on the seabed serving the satellite station outside Longyearbyen.

While writing the report, Paavo Lipponen and Reijo Sevento were in contact with a number of businesses interested in joining the project.

“Every country agreed with the need for the project and was ready to treat official permits, for example, favorably. Private financing for the project and the real business opportunities it would open up were also considered important,” Lipponen says.

The report suggests the project provides equal benefits for everyone involved. A link of the cable will provide Murmansk with the fastest data communication possible to get. From Murmansk, several other cities and industrial sites in northwest Russia can be connected.

For Finland, the report suggests the project to be on the agendas of international meeting and should be given strong preference during the Finnish Chairmanship of the Arctic Council as of spring 2017.

Finland’s Minister of Transport and Communication, Anne Berner, says she is committed to take the project swiftly forward.

“The project is of great significance to banks, games industry and international development of the internet of things for example. As a link between the North-East Passage and Baltic Sea cables Finland would have an excellent opportunity to become an international traffic node,” Anne Berner says.

Challenges that came up during the study are related to such matters as information security and project financing. The company that would be responsible for the telecommunications should be neutral and able to ensure protection of privacy.

Next step will be to establish a multinational company or project that can take the project forward. The trans-Arctic data connection can be operational in three to four years.