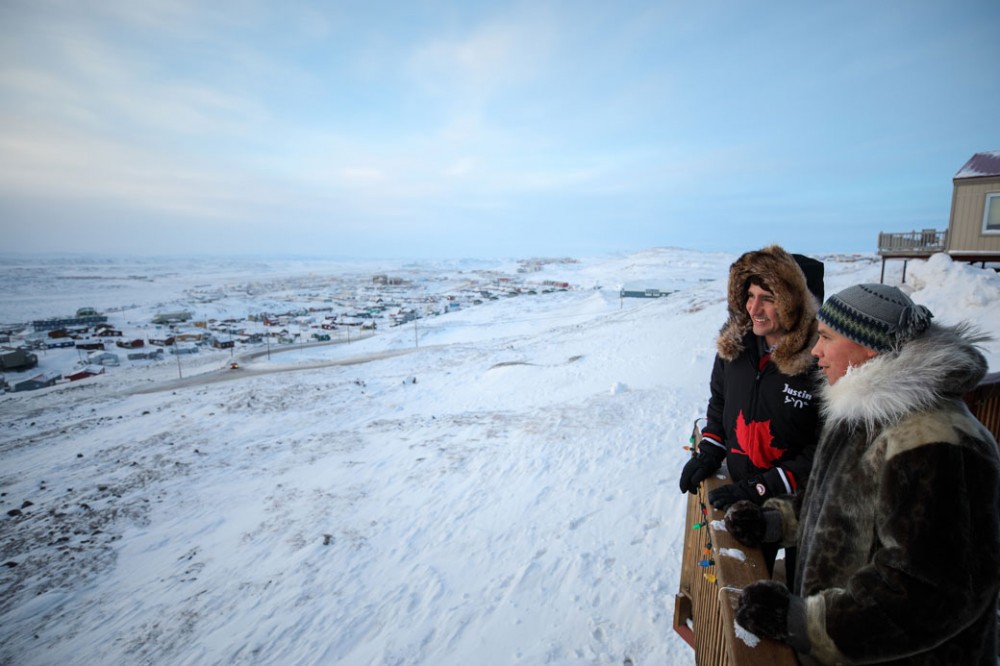 Prime Minister Justin Trudeau defended his government’s ban on Arctic drilling for the next five years, saying it simply couldn’t be done safely.
Read in Russian | Читать по-русски
By

Responding to criticism of the move from Darrel Nasogaluak, the mayor of Tuktoyaktuk, a remote community on the shores of the Beaufort Sea, during a town hall meeting in Yellowknife on Friday, Trudeau said one of his government’s fundamental responsibilities was to protect communities and the environment from a potential environmental disaster.

“There has been a lot of research, a lot of people over a long time have tried to look at ways to exploit and explore Arctic Ocean resources and quite frankly it has never been determined that it can be done safely,” Trudeau said. “The cataclysmic impact of an oil spill in the High Arctic Ocean is unimaginable. That’s why we made the decision that there needed to be moratorium on Arctic oil and gas exploration.”

“It’s quite clear from our work at WWF that risk to nature of drilling is far too great to be worth taking,” Miller said in a telephone interview.

However, while environmental activists have applauded the ban, announced by Trudeau in conjunction with outgoing President Barak Obama on December 20, 2016, the Liberal leader has come under fire from local government and some Indigenous leaders in Nunavut and the Northwest Territories, who have denounced the lack of consultations with them prior to the announcement.

“Our people have been working with the industry over 50 years on and off, we’ve grown skills, we’ve got good employment, our businesses have grown, the region has grown,” Nasogaluak said, addressing Trudeau. “To lose an opportunity on oil and gas for our people is very upsetting. One elder told me, ‘We can’t just up and move to where the jobs are.’”

Moratorium to be reviewed

Yet he did not close the door to future oil and gas exploration completely.

“We make decisions based on science,” Trudeau said. “That’s why we’re working with the North, with communities, with the premier with the scientists to establish the framework so that we can evaluate every five years the science around the modern technologies, around spill response, around operating frameworks to make sure that the moratorium is still relevant.”

The ban means Arctic ecosystems will be protected by default and it would be up to the oil industry to demonstrate that they can operate safely, “which we are a long way from being able to do right now,” Trudeau said.

Paul Barnes, manager of Atlantic Canada and Arctic for the Canadian Association of Petroleum Producers, said Canada’s offshore industry has been operating safely for more than 50 years.

“The oil and natural gas industry has a long history of meeting the challenges of Arctic exploration with technological advances, science-based research, applications of lessons learned from operating experience, traditional knowledge and adaption of best practices from elsewhere around the world,” Barnes said in an emailed statement. “Our members have been working to world-class standards in the offshore and have brought tremendous economic benefits to Northern and Atlantic Canada.”

Canada’s energy regulator, the National Energy Board, has strict filing requirements for offshore drilling in the Canadian Arctic and it the oil industry believes that it can be done safely, Barnes said.

“We’ve done oil spill trajectory modeling and any deep-sea well puts the ecological health of huge swathes of the Arctic at risk,” Miller said. “And that is an economic challenge, not just an environmental challenge because it puts the jobs and livelihoods of people whose livelihood depends on sustainable exploitation of things like fish very much at risk.”

And while the science on the dangers of offshore drilling won’t change, the political climate could, Miller warned.

“I’m less concerned with Mr. Trudeau changing his position than the fact the moratorium isn’t permanent,” Miller said. “Because Mr. Trudeau’s successor could, perhaps, change that position sometime in the future whether it be in five, ten, fifteen or twenty years.”

Hundreds of people had packed into the gym at the Yellowknife Multiplex to take part in the town hall, first town hall event north of the 60th parallel.

The Liberal leader was also grilled for abandoning plans to reform Canada’s first-past-the-post electoral system, a key electoral promise during the 2015 campaign.

On Thursday, Trudeau was in Iqaluit the capital of Canada’s Arctic territory of Nunavut, where he signed a declaration with Inuit leaders, setting a promised Inuit-to-Crown partnership in motion.

This was Trudeau’s first visit to the northern territories since his 2015 election victory.