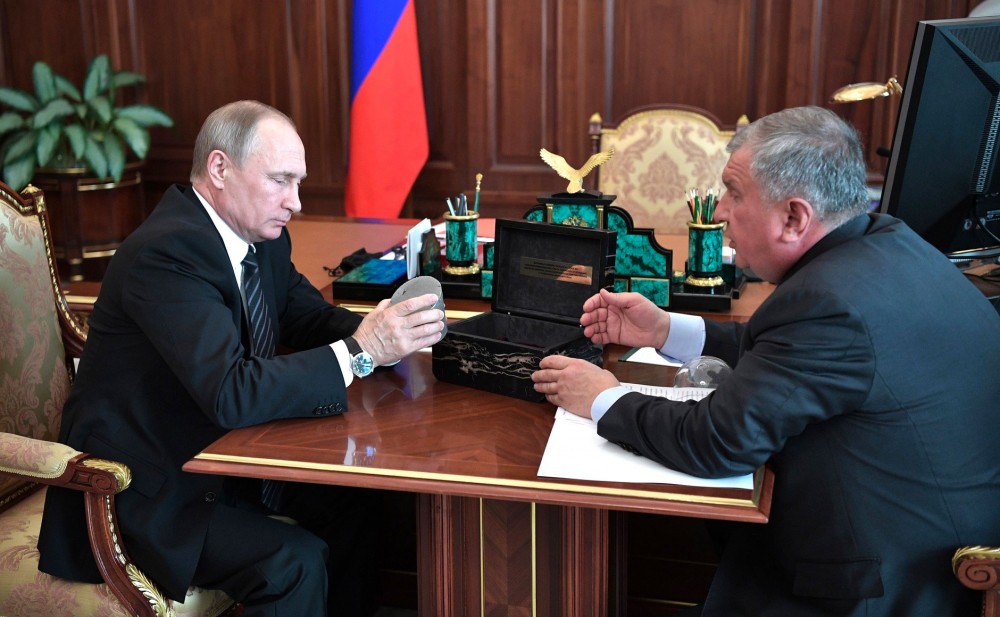 "This is from 2,000 meter below the Laptev Sea", Sechin tells Putin. Photo: Kremlin.ru

«This will truly be a unique oil field», Rosneft leader Igor Sechin says as he gives the president a core sample from the ongoing Arctic drilling operation.
Read in Russian | Читать по-русски
By

As his company is exploring one of its northernmost ever wells, Sechin this week met with President Vladimir Putin to report about «a major new discovery».

«We can inform you, Vladimir Vladimirovich, that we, based on preliminary analysis, are about to open a very serious field», Sechin said as he handed the President a core sample from the drilling.

According to Sechin, preliminarily technical studies from the company’s Laptev Sea zone indicate geological reserves of up to 9,5 billion tons.

«Our geologists are saying that this will be a unique field», he underlined, a transcript from the meeting published by the Kremlin reads.

The Russian state oil company in early April started drilling at its Tsentralno-Olginskaya-1 well, a part of the Khatanga license area by the Laptev Sea.

Rosneft completed preparations for drilling at Tsentralno-Olginskaya-1 in record-short time. The company obtained the license in 2015, whereupon extensive seismic mapping was started. After that, a total of 21,000 meter of seismic studies was conducted and as many as 114 prospective structures identified..