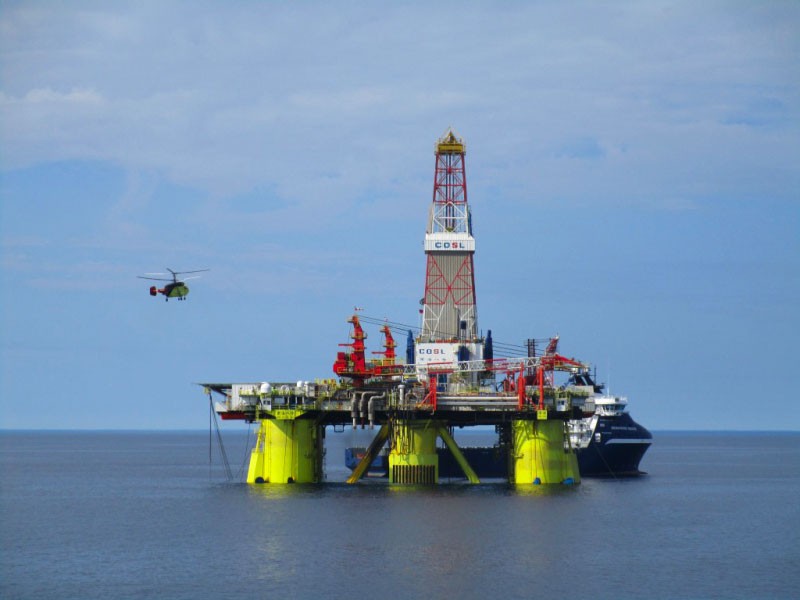 The «Nanhai-VIII» spuds this year’s only offshore well in the oil-rich Russian Arctic region.
Read in Russian | Читать по-русски
By

The field is called Leningradskoye and the licenseholder is Gazprom Neft. But it is the China Oilfield Services (COSL) which is doing the drilling.

The field area is located off the coast of the Yamal Peninsula, about 400 km east of archipelago Novaya Zemlya. The semisubmersible «Nanjai-VII» in late June stopped over in Murmansk on its way to the Kara Sea.

It is the only well drilling conducted in the Kara Sea this year.

Company UTair confirms that it is providing helicopter services to the operation. From a base in Cape Kamenny, a site on the eastern shore of Yamal, a Ka-32 helicopter is a 24-hour alert for the oilmen. The helicopter crew includes medical personnel, the company informs.

Cape Kamenny is located an estimated 500 km from the drilling site.

The Leningradskoye field is believed to hold a trillion cubic meters of gas and three million tons of gas condensate. It is one of several offshore oil fields controlled by Gazprom Neft, the oil subsidiary of Gazprom.

China Oilfield Services has on several previous occasions cooperated with the Russian company, including in the Russian far east. The «Nanhai-VIII» can operate on water depths up to 1,400 meters and . The drilling depths can be 7,600 meters.

The operation comes after Gazprom Neft in February this year announced a tender on the drilling operation with a cost frame of 1,7 billion rubles (€26,8 million).

The Kara Sea is considered one of the most prospective parts of the Russian Arctic shelf. In 2014, company Rosneft made a major discovery in its Pobeda field, a cooperative effort with ExxonMobil.

Data from the Russian Arctic and Antarctic Research Institute show that key parts on the Kara Sea was ice-free in the last week of July.