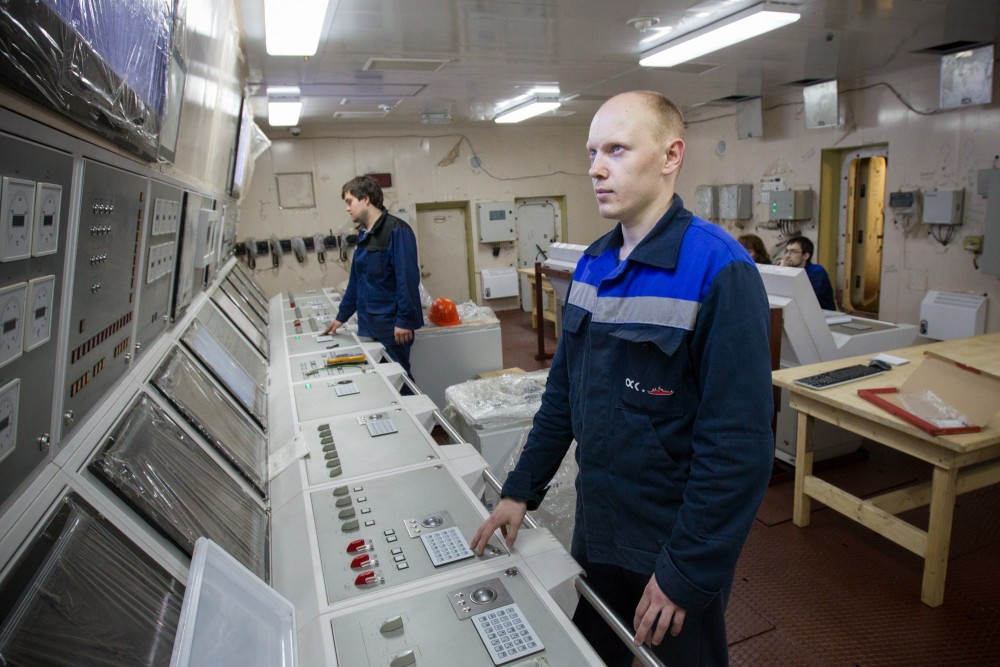 Still plastic over the screens in the reactors' control room on board the floating nuclear power plant. Photo: Rosenergoatom

Rosenergoatom brings a new era for electricity production to the Russian Arctic.
Read in Russian | Читать по-русски
By

The launch of the two reactors on board «Akademik Lomonosov» is now officially schedules for autumn 2018, Russian nuclear power station subsidiary Rosenergoatom announces.

The mile-stone event takes place at Atomflot, the service-base for Russia’s fleet of nuclear-power icebreakers just a kilometer north of the nearest apartment blocks in Murmansk. The two 35 MW reactor units are of similar design as the reactors powering the icebreakers, the so-called KLT-40S. But instead of providing power to the propeller-shafts, the turbines on «Akademik Lomonosov» will produce electricity and heat.

This week, one of the two turbines was tested at the plant in St. Petersburg where the floating nuclear power plant is built. By next spring, all initial testing will be completed and the barge-looking plant will be towed around Scandinavia to Russia’s Arctic port on the coast of the Barents Sea. When arriving in Murmansk, the uranium fuel rods will be loaded into the reactors.

After a testing period of at least one year, the floating nuclear power plant will be towed across the Barents Sea, through the Kara Sea, and further east along the Northern Sea Route to Chukotka in the Far East. Here, in the port of Pevek, preparations is already underway to facilitate the harbor for the arrival of «Akademik Lomonosov».

By 2021, the entire existing (on shore) Bilibino thermal nuclear power plant will be shut down and the floating plant will replace the needs for heat and electricity. First of the four existing reactors will be shut down in 2019. Rosenergoatom has previously stated that the goal is to build a series of similar floating nuclear power plant, for Arctic coast towns or offshore installations.