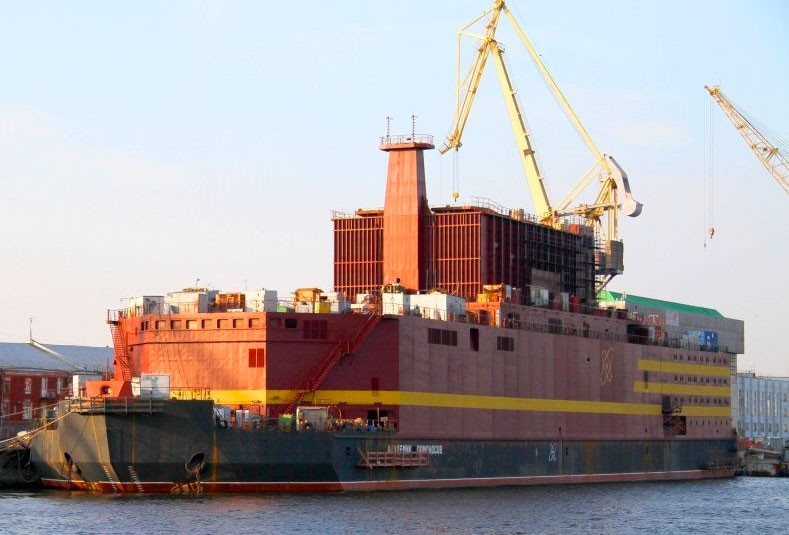 The world’s first ever installation of its kind will be towed several thousand kilometers through Arctic ice before it reaches its destination in Pevek, June 2019.
Read in Russian | Читать по-русски
By

General Director of Rosenergoatom Andrey Petrov confirms that the «Akademik Lomonosov» is to arrive in Pevek, the remote town of Russia’s east Arctic coast, in June 2019.

At that time, major parts of Russian Arctic waters are still covered by ice.

The power plant will be fully loaded with nuclear fuel before it sets out on the about 6,000 km long voyage. More than 1,000 km of the sea route is likely to be icy, and icebreaker assistance will be crucial. Especially the waters from the Vilkitsky Strait, through the Laptev Sea and the East Siberian Sea are likely to pose challenges.

In his meeting with Chukotka Governor Roman Kopin this week, Rosenergoatom leader Petrov made clear that the floating NPP is to start test production in the course of September 2019 and later the same year be fully ready for regular production.

A total of 305 people will have their workplace connected with the NPP in Pevek, Petrov says. About 80 of them will work on a commuter basis.

The floating power station is now getting ready for its first voyage. In the course of spring this year, the installation will be towed out of St.Petersburg and all along the Norwegian coast to Murmansk. It will arrive in Murmansk in June this year, Petrov says.

During its year in Murmansk, the «Akademik Lomonosov» will be loaded with uranium fuel and undergo testing.

The coming of the «Akademik Lomonosov» will include a radical change for Pevek, the small Arctic town of 4,500 people. The NPP has two KLT-40s type reactors with a production capacity of up to 70 MW. It will be instrumental in powering several new industrial projects in the remote Arctic region. Among them is the Peschanka copper project, which ultimately is to produce up to 1,2 million tons of ore per year.

“Akademik Lomonosov” can look back on a 13 years’ history flavoured with increased costs and construction delays. Originally started at the Sevmash yard in Severodvinsk back in 2006, the hull was moved to the Baltic Shipyard in St. Petersburg in 2009 because the yard by the White Sea had to concentrate on building warships and submarines. In 2011, the floating nuclear power plant became central in the bankruptcy proceedings against the Baltic Shipyard.