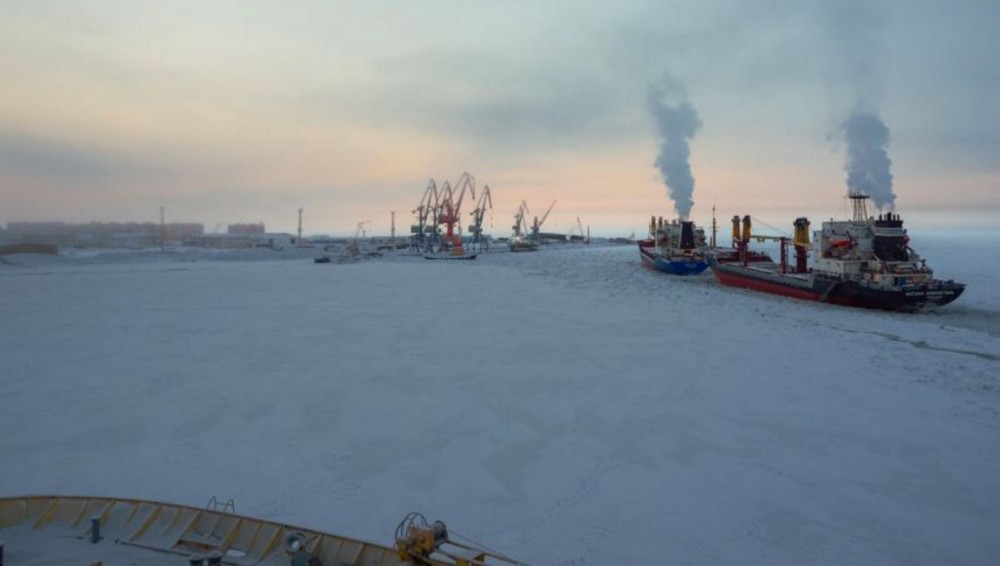 Hectic construction in the east-Arctic settlement of Pevek ahead of installment of Russia’s first floating NPP.
Read in Russian | Читать по-русски
By

About 110 people are working round-the-clock on site and 320 meters of the new seaside infrastructure is already completed, local authorities in Pevek inform.

The harbor infrastructure will house the «Akademik Lomonosov», which is due to arrive on site in June 2019. In wintertime, Pevek is embroiled in thick ice and the new harbor will be capable to withstand the tough climatic conditions, the regional administration says.

Major volumes of construction materials were shipped to the remote Arctic town in summer of 2017, including a concrete-producing facility which can delivers up to 45 cubic meters of concrete per hour.

In the course of March, the number of workers on site will be additionally increased in connection with the construction of buildings and other port structures.

The new port infrastructure of Pevek will cover a 1700 meter long area, the regional administration says.

The floating nuclear power plant is currently docked at the Baltic Yard in St.Petersburg, and is due to be towed northwards along the Norwegian coast and to Murmansk in June this year.

General Director of Rosenergoatom Andrey Petrov recently confirmed that the «Akademik Lomonosov» is to arrive in Pevek in June 2019.

The power plant will be fully loaded with nuclear fuel before it sets out on the about 6,000 km long voyage. More than 1,000 km of the sea route is likely to be icy, and icebreaker assistance will be crucial. Especially the waters from the Vilkitsky Strait, through the Laptev Sea and the East Siberian Sea are likely to pose challenges.

In a recent meeting with Chukotka Governor Roman Kopin, Rosenergoatom leader Petrov made clear that the floating NPP is to start test production in the course of September 2019 and later the same year be fully ready for regular production.

A total of 305 people will have their workplace connected with the NPP in Pevek, Petrov says. About 80 of them will work on a commuter basis.

The coming of the «Akademik Lomonosov» will include a radical change for Pevek, the small Arctic town of 4,500 people. The NPP has two KLT-40s type reactors with a production capacity of up to 70 MW. It will be instrumental in powering several new industrial projects in the remote Arctic region. Among them is the Peschanka copper project, which ultimately is to produce up to 1,2 million tons of ore per year.