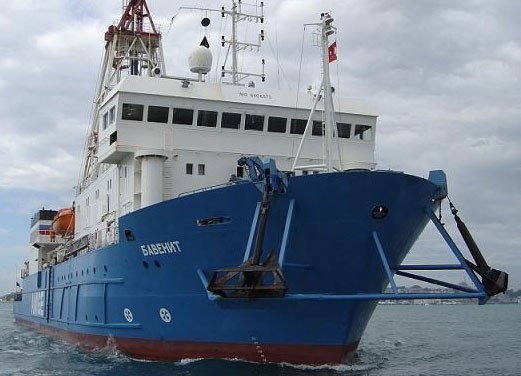 The «Bavenit» will become one of the world’s best equipped ships of its kind, capable of exploring the outer parts of the Russian Arctic shelf, state company Rosgeo says.
Read in Russian | Читать по-русски
By

The ship built in Finland in 1986 has long been one of Russia’s most advanced vessel for shelf exploration and drilling. Now, the ice-class ship gets additional upgrades which will make it capable of engaging in the northernmost parts of the Russian Arctic shelf.

According to Rosgeo, the ship owner, the «Bavenit» is currently undergoing modernization which will make it one of the best equipped geological exploration vessels in the world.

When the upgrades are completed in May this year, the ship will have an expanded capacity to drill exploration wells and conduct geotechnical studies of the sea bottom. It will be able to pick sampled from the sea bottom from unlimited depths, a press release from the company reads.

The «Bavenit» will be able to make hydrocarbon discoveries along the outermost parts of the Russian Arctic shelf, and can also

«Bavenit» will this summer be engaged in Russian Arctic waters. Among possible clients are Novatek, Rosneft, Gazprom, Lukoil.

Russia’s two leading oil and gas companies Rosneft and Gazprom has over the last year significantly expanded their engagements in the Arctic. Rosneft now has a total of 55 offshore licenses while Gazprom has an estimated 41. The lion’s share of the license areas are in Arctic waters.