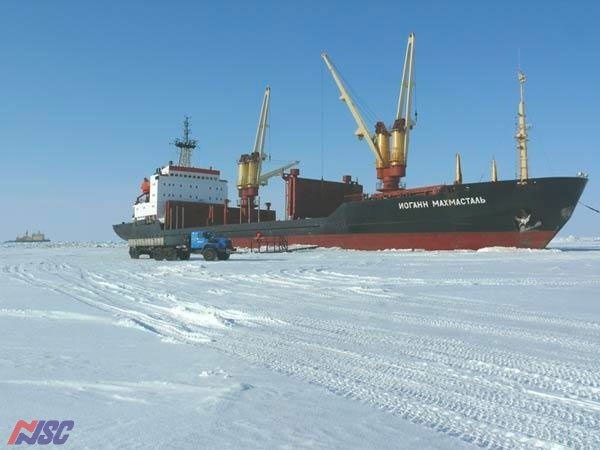 The remote river delta could ultimately become site for one of the biggest oil terminals in the Russian Arctic.
Read in Russian | Читать по-русски
By

It was the «Ioann Makhmastal», a 131 meter long cargo vessel, which on 31st March delivered the 2,500 ton cargo on the ice-covered Yenisey River near Cape Tanalao.

The shipment was made for company Taymyrneftegaz and includes construction materials for the development of the Payakha oil field, the Northern Shipping Company informs.

The operation was conducted in close cooperation with specialists from the Arctic and Antarctic Research Institute and Taymyrneftegaz, and icebreaking services were provided by Rosatomflot.

Cape Tanalao is located in the Yenisey river delta and is planned as site for a new oil terminal by Taymyrneftegaz and its mother company Independent Oil Company (NNK), the enterprise controlled by former Rosneft President Eduard Khudainatov. It will serve the nearby Payakhskoye and Severo-Payakhskoye, the two oil fields located about 130 km to the north of Dudinka.

The project was in October 2015 included in federal transportation and infrastructure plans.

The two Payakhskoye fields are believed to hold up to 170 million tons of oil equivalents.

According to Khudainatov, the NNK intends to invest $5 billion in the project. In late 2017, the company signed a cooperation deal with Italian bank Intesa Sanpaolo, newspaper Vedomosti reported.

Production start at the Payakha project is set to 2023 when production is due to reach 7 million tons. By year 2025, production will amount to 18-20 million tons, Khudainatov told the newspaper.

The construction of the port will lead to an addition increase in the volumes of oil ship out through Arctic waters. From before, Russia is shipping out growing volumes through its Varandey terminal on the Nenets coast, as well as from the Prirazlomnaya oil platform and the Novy Port field.