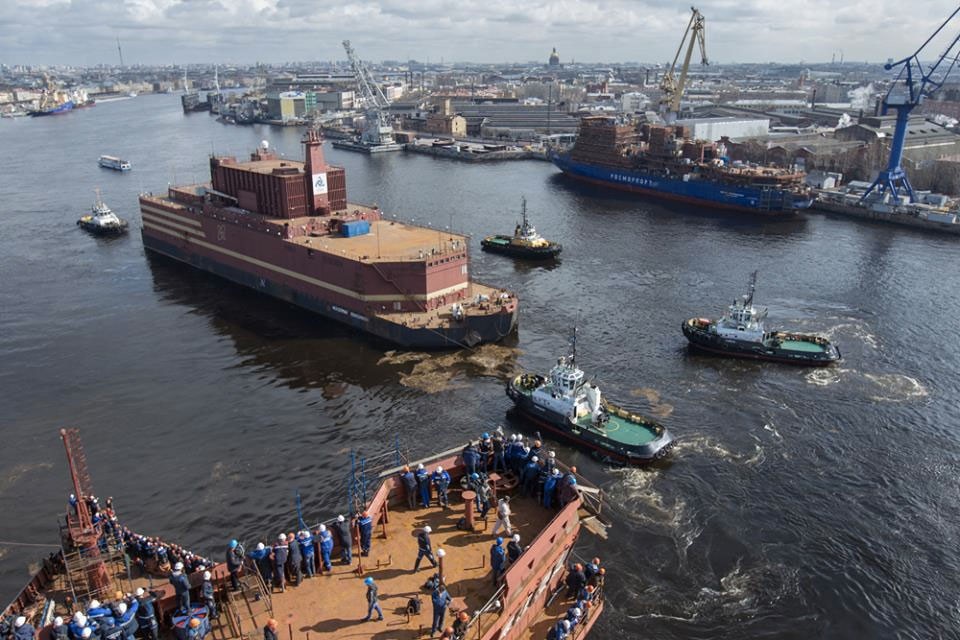 A local reflection from Blogger51 on the floating nuclear power plant which will be charged with nuclear fuel in the City of Murmansk.
By

The 70-megawatt seagoing nuclear reactors will be towed from Murmansk to Pevek where it will replace the Bilibino nuclear power plant. This is cheaper than building new land based facilities in Chukotka, and it also has an element of mobility.

But before the floating nuclear power plant gets to Pevek, its reactors will be filled with nuclear fuel, and this will happen in Murmansk, at the Rosatomflot base.

This writer does not particularly understand the subject of nuclear safety and can only look at the situation through layman’s eyes. What sources on this topic should be trusted or dismissed is also not clear.

On the one hand, there are the dodgy «greens».

On the other hand, Rosatomflot has invested tens and hundreds of millions in own PR with the goal of achieving what it calls “a public and environmental acceptability of the company’s  development projects in the regions where it operates in order to enhance the level of approval among the population”.

From a third perspective, there is always the ever-present possibility of theft and corruption in Rosatom, as well as the reselling of intellectual property by employees of the nuclear power plant without the knowing of the company.

Fourthly, there are public watchdog groups who have a great understanding of the budgets and working methods of the current nuclear energy situation.

From the fifth perspective, there is the cooperation between the nuclear power industry and the community groups. Sixth, the systematic lies of officials about emergency situations.  (remember the fire at the nuclear submarine «Yekaterinburg» and the allegedly absence on board of ammunition).

Finally, seventh, is the substitution of ideas. The “cheapness of nuclear energy” does not take into account the subsequent costs for storage, transportation or utilisation of the spent nuclear fuel. And «accidents» become «technological malfunctions» and gas explosions  become “gas puffs”.

Returning to the voyage of floating nuclear power plant:

Since the station was built at the Baltic plant in St. Petersburg, the station was to be loaded with nuclear fuel there. But because the delivery of the station to Pevek had to pass through the coastal waters of Estonia, Sweden, Finland, Denmark and Norway. The local politicians were opposing it.

I do not now why, but pretty much anything with a nuclear reactor on board passing through Scandinavia always causes discussions in the local press, they seriously discuss about risks and consequences, including reputational risks. What if there suddenly would be a storm and the station with nuclear fuel had to take shelter in a fjord. And judging from the level of life standards, the Scandinavians are hardly stupid.

And certainly, pulling a floating nuclear fueled tank past the Baltic states and Scandinavia is fraught with reputational risks.

The Norwegians are very worried about the ongoing transportation. In a worst case scenario, the nuclear power plant could end up shipwrecked off the coast of Norway, and this would absolutely impact Norway’s tourist business and fishing industries.

«If the reactors will have to be tugged into one of the fjords because of waves at sea, people will not like it, and even more - it will be a issue of the image of Norway».

It became clear that the towing of the reactors with nuclear fuel along the coasts of the Baltic and Scandinavian countries are full of reputational risks. That means that the charging and testing of the reactor will take place within the city boundaries of Murmansk. The activists in Petersburg are celebrating their success.

The press in Murmansk happily write about the right of Murmansk to conduct this unique operation. There is however yet such a detail.

There does seem to be an irregularity according to the civil defense rules. Somehow, it seems that the residents in the vicinity of the Rosatomflot base have never been warned about any manipulations connected to radioactive nuclear fuel. And accordingly, local residents have yet to be warned about the possibilities of emergency evacuation, the availability of gas masks and respirators, iodine prophylaxis and more

And after a brief search of my house, I noticed that I personally do not own a gas mask. Truthfully, I do not even know where to get one. And in the event of nuclear catastrophe, where exactly do we evacuate to?  Yes, the download of fuel is likely to be problem-free. But taking into account the one-sidedness and exceptional positivity of the official press releases, I am thinking that a brief vacation to somewhere not particularly near Murmansk during the fuel loading and reactor tests might be a great idea. It’s a pity only, that no one ever tells us about the dates of these actions in advance. They just kind of end up in the news after the fact.