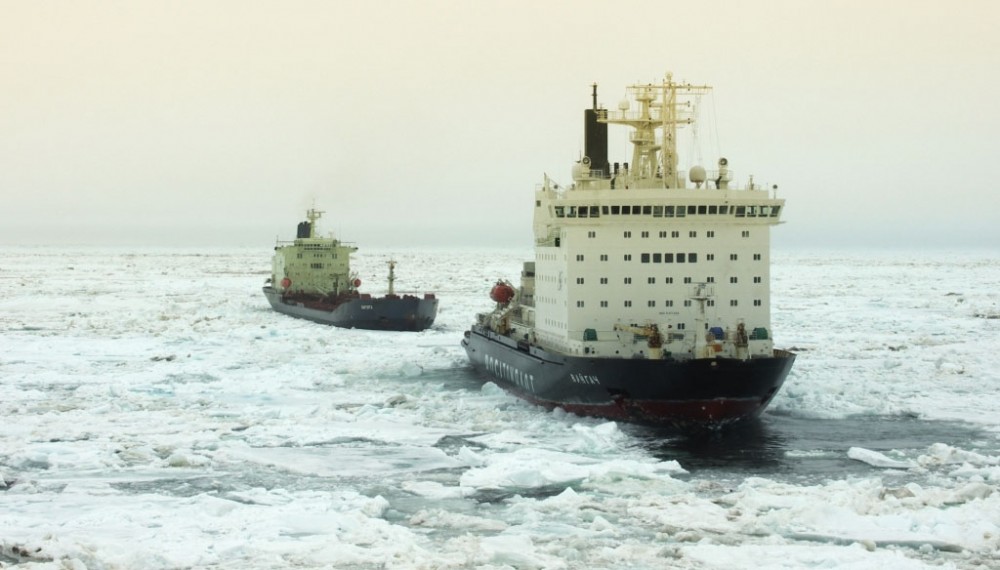 It is nuclear-powered icebreaker "Vaygach" that is escorting the west-bound convoy. Illustration photo: Rosatomflot

Among the ships involved in this year’s first west-bound voyage across the Northern Sea Route is LNG carrier «Clean Planet», which is on its maiden trip to the Arctic terminal of Sabetta.
By

There is thick ice on the waters as a convoy of at least four vessels is sailing with west-bound course through the East Siberian Sea. Conditions are complicated and icebreaker assistance is needed. According to the Russian Arctic and Antarctic Institute, major parts of both the Laptev Sea and the East Siberian Sea still have up to one meter thick ice.

It is this year’s first voyage from east to west on the Northern Sea Route. The shipping season from west to east started in late June when LNG carriers  «Vladimir Rusanov» and «Eduard Toll» sailed from Sabetta to the Chinese port of Jiangdu.

Included in the west-bound convoy are cargo vessel «HLL Richards Bay» and chemical tanker «Baltico». The latter has delivered goods in nearby Pevek, while the former has Sabetta as destination.

On July 26th, the vessels were located off the coast of Pevek, data from ship tracking service MarineTraffic show. It is nuclear-powered icebreaker “Vaygach” that is escorting the convoy, state company Rosatomflot informs.

Included is also «Clean Planet»,  a powerful LNG carrier operated by Greek company Dynagas. It is the first Arctic voyage of the kind for the tanker. But far from the last. Along with sister ship «Clean Ocean», it will the next 15 years shuttle to and from the LNG terminal in Sabetta.

In December 2017, the China Development Bank entered into a sale and leaseback deal with shipowner Dynagas over the two 162,000 m³ LNG carriers. The deal includes the purchase of the two vessels at a total price of US$363.8M from Dynagas, which will in turn lease back the two ships at the same amount, LNGworldshipping reports.

The «Clean Planet» and «Clean Ocean» are both ice-class 1A LNG carriers, built at South Korea’s Hyundai Heavy Industries in 2014. They will join the quickly growing fleet of tankers serving Novatek’s Yamal LNG project.

When operating at full capacity, the Yamal LNG will produce 16,5 million tons of LNG per year. A fleet of 15 carriers will ship the liquified natural gas to the market. A key share will be sent eastwards to Asian markets.