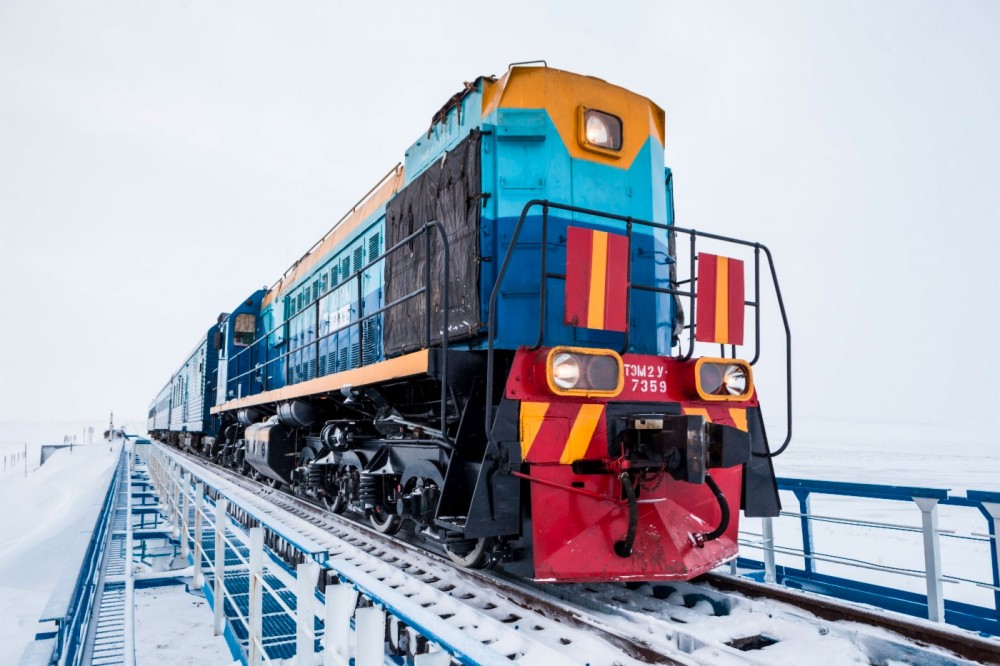 If the country is to reach its high ambitions for the Northern Sea Route, it might have to build a railway to Sabetta.
Read in Russian | Читать по-русски
By

«Vladimir Vladimirovich - you have been there yourself, it is of course a crucial center for current Arctic developments and without doubt, the main center for development of the Northern Sea Route», acting Yamal-Nenets Governor Dmitry Artyukhov underlined as he on Tuesday this week sat down by the table with President Putin.

It was Sabetta that was on top of the agenda as the two men met in Novo-Ogaryevo, Putin’s residency outside Moscow.

The outpost on the northern tip of the Yamal Peninsula has in few years been transformed from a small desolate village to a vibrant industrial town with more than 20 thousand inhabitants. A major share of all goods shipped out along the Northern Sea Route today comes from Sabetta.

The LNG plant on site will soon produce more than 17 million tons of liquified natural gas per year, all of which it is shipped out through Arctic waters to clients in both Asia and Europe. According to Leonid Mikhelson, CEO of Novatek, the volumes will by year 2030 increase to 60 million tons as the next projects, the Arctic LNG 2 and the Arctic LNG 3, comes into operation.

With the major boost in industrial production comes a need for new infrastructure.

Vladimir Putin has himself on several occasions expressed support for the developments in Yamal. Already in his big annual press conference in 2015, the president made clear the he wants to see Sabetta develop into «a universal port for all kind of goods».

”This is a very convenient place with really good logistics”, he underlined.

The first part of the so-called Northern Latitudinal Passage project will be launched already this winter, Yamal-Nenets leader Artyukhov makes clear. Construction machinery is on its way to the region and the first object to be built is a major bridge across the Ob River. It is considered the most complicated part of the project. Subsequently, construction workers will proceed with the building of 350 km of new railway which ultimately will connect the current Northern and Sverdlovsk lines.

The building of railway to Sabetta constitutes the second part of the Northern Latitudinal Passage. The line will be an extension of the current Bovanenkovo railway which today is owned and operated by Gazprom.

«The development of the project Northern Latitudinal Passage-2 includes the efficient launch of a huge Russian oil and gas province, the boost of shipping on the Northern Sea Route and significant effects on the economy and the budget system,» Artyukhov underlined in a meeting with project partners earlier this week.