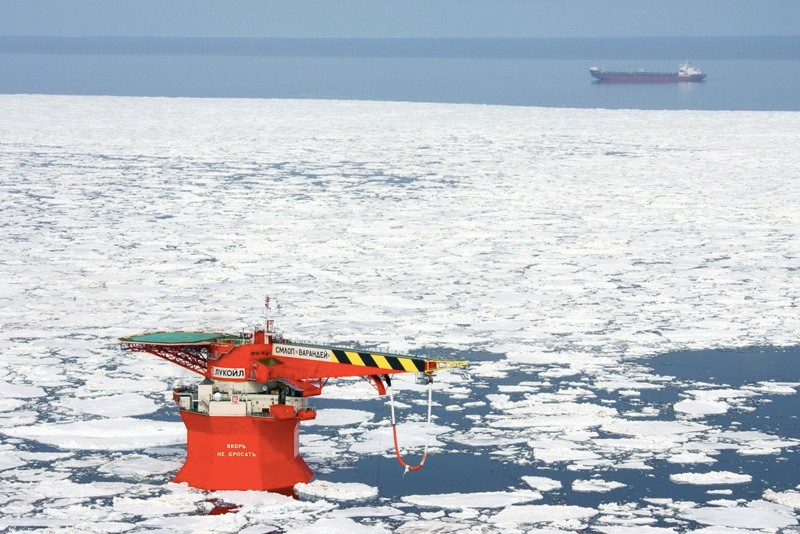 Russia’s two biggest oil producers are at odds over out-shipments from the Arctic terminal of Varandey.
Read in Russian | Читать по-русски
By

It is a highly difficult partnership, the one between Rosneft and Lukoil in the Trebs and Titov oil projects. The two companies together produce oil in the fields that are among the biggest in the far northern Nenets tundra. But Rosneft is increasingly displeased with its partner.

The state-owned company is now taking the privately owned Lukoil to the Federal Antimonopoly Service for what it says is an inflated tariff level on out-shipments from Varandey, the terminal on the coast of the Pechora Sea.

It is Lukoil that owns the Varandey, and oil from the Trebs and Titov fields are pipelined to the terminal and from there exported to the world markets.

Lukoil is charging $38 per ton of oil shipped out from Varandey. That is too much, Rosneft says and demands a reduction to only $18 per ton, newspaper RBC reports. Lukoil is reportedly only ready to offer a $10 per ton discount.

In a sign of protest, Rosneft has now reduced production in the fields by more than half, the RBC writes. In 2017, the partnership produced 2 million tons of oil.

The Trebs and Titov fields hold up to 140 million tons of oil and was originally developed by Lukoil in partnership with Bashneft. However, as Rosneft in 2016 acquired control over Bashneft the project partnership shifted and relations soured.

Rosneft today owns 75,1 percent of the partnership, while Lukoil owns the remaining 24,9 percent. The name of the joint venture is Bashneft-Polyus.

The two tundra fields are located too far away from the oil pipeline network operated by state company Transneft, and oil from Trebs and Titov is therefore shipped out through Varanday. Rosneft has reportedly considered to circumvent Lukoil’s infrastructure by building a new pipeline. That however would cost several billion rubles.

The Varandey terminal was built by Lukoil in 2008 and has an annual out-shipment capacity of 12 million tons. The terminal is located in shallow Arctic waters 21 km from the coast. A fleet of ice-class tankers shuttle the oil to terminal facilities in Murmansk. The Varandey is connected by pipeline to several of Lukoil’s fields in the area, among them the Yuzhno-Khilchuyu field.

The conflict with Rosneft has resulted in a decrease in out-shipments from Varandey. In the first eight months of 2018, a total of 4,5 million tons of oil was handled by terminal, which is a 22 percent drop compared with same period in 2017, Infranews informs.