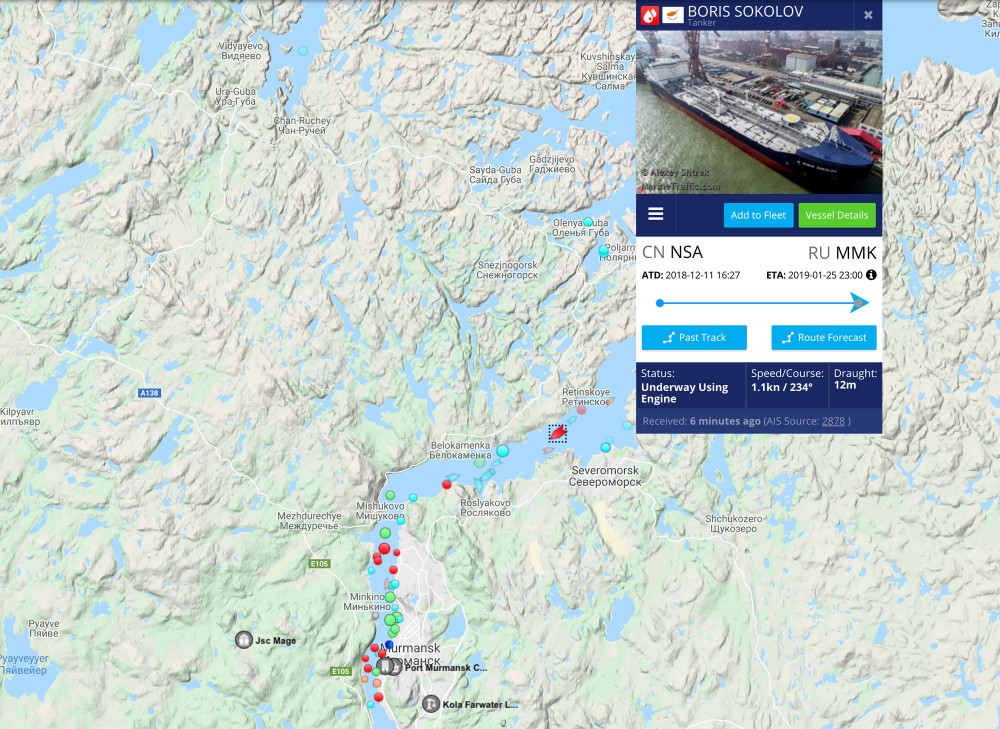 The «Boris Sokolov» sailed from China and all along the Northern Sea Route in mid-winter.
Read in Russian | Читать по-русски
By

The 214 meter long tanker on Friday afternoon arrived in Murmansk after a 6-week voyage from Nansha, China. The new-built vessel on the 11th December left the Chinese Guangzhou Shipyard and set course towards the north. It was quickly joined by new LNG carrier «Boris Davydov», a ship constructed at the Daewoo Shipbuilding and Marine Engineering (DSME) yard in South Korea.

Few days later, the two ships together sailed through the Bering Strait and into the Chukchi Sea. The ships subsequently broke their way through the East Siberian Sea, the Laptev Sea and later into the Kara Sea.

When entering the Kara Sea, the «Boris Davydov» set course for Sabetta, while the «Boris Sokolov» proceeded towards Murmansk.

It was the first voyage of its kind. There is thick ice in major parts of the Northern Sea Route, and especially in the eastern part of the area. Data from the Russian Arctic and Antarctic Institute show that practically the whole East Siberian Sea is covered by up to two meter thick one-year ice as well as older more solid ice. Also the Laptev Sea and the northeastern parts of the Kara Sea have thick ice layers.

Both the «Boris Sokolov» and the «Boris Davydov» have Arc7 ice class and are able to break through about two meter thick ice layers.

According to Aker Arctic, the Finnish ship design company, the «Boris Sokolov» will be used primarily to transport gas condensate from Sabetta LNG terminal to customers in Europe and Asia. It can also be applied as a regular oil tanker.

The tanker has a deadweight of 43,300 tons. It was handed over to its owner, Greek company Dynacom Tankers Management, on 4th December. It is the first vessel of the kind built for shipping of condensate from Sabetta.