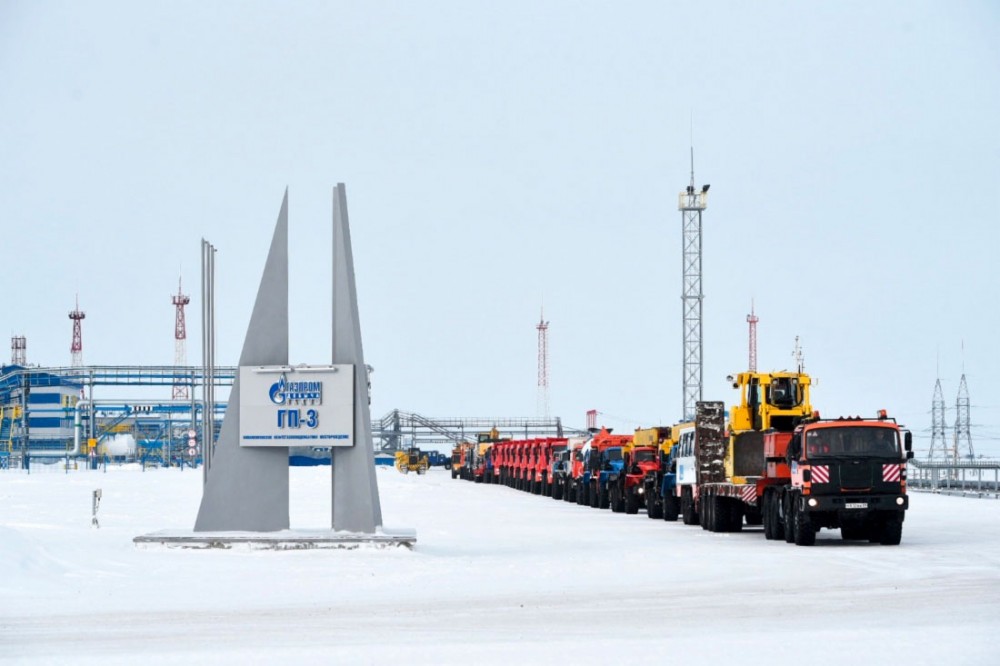 A convoy of 30 trucks, bulldozers and excavators is on its way to the development site of the Kharasavey natural gas field. About 20 percent of the field resources are located offshore in the Kara Sea.
Read in Russian | Читать по-русски
By

«Today we start the full-scale development of the Kharasavey field,» Gazprom leader Aleksey Miller said in a ceremony on Wednesday. On a direct televised link to the Kremlin, Miller showed how the convoy of construction machinery started a 8-hours drive from nearby gas field Bovanenkovo towards Kharasavey.

«Only domestic equipment will be applied for the production of the gas,» the company leader underlined.

Kharasavey is next in the line in the grand development of the vast natural gas reserves of the Yamal Peninsula. The field that is located partly on land, partly offshore in the Kara Sea, is to be online in 2023 and deliver up to 32 billion cubic meters of gas per year. Most of it will be piped westwards to consumers in the European Union.

About 20 percent of the 2 trillion cubic meter fields resources are located offshore in the nearby waters of the Kara Sea.

The field will be connected with pipeline to Bovanekovo, the nearby natural gas field that in 2018 reached its annual target production of 115 billion cubic meters.

Gazprom has over the last three months built a temporary 100-kilometer long road connection from Bovanenkovo. The road is built on the snow and will be in operation only for few weeks. The 30 vehicles that now drive across the Yamal snow road will be instrumental for the launch of field development. Later, more people and machinery will arrive to site.

According to Aleksey Miller, a total of 2,000 pieces of machinery and about 5,000 people will be engaged in the field development. As many as 236 wells are to be drilled, several of them offshore in the Kara Sea, and production launch is set to year 2023.

The development of the Kharasavey was announced in July 2018. According to the company, housing quarters for the project workers was already on site in Bovanenkovo. A total of 1,5 million tons of construction materials are to be shipped to site, in summertime through a sea port facility on the Kara Sea coast. In winter time, the goods will be transported with the railway connection to Bovanenkovo, and from there with trucks.

The Yamal Peninsula is the top priority area of Gazprom and natural gas reserves are huge. In addition to the Bovanenkovo and Kharasavey fields come the Tambey fields and several more structures. By year 2030, Russia intends to produce an annual of up to 360 million cubic meters of natural gas in the peninsula.

That will amount to a major share of the company’s total production. In 2018, Gazprom produced a total of 497,6 billion cubic meters of natural gas, of which 201,8 billion was sold to the abroad.

Big cleanup ahead of tundra drilling