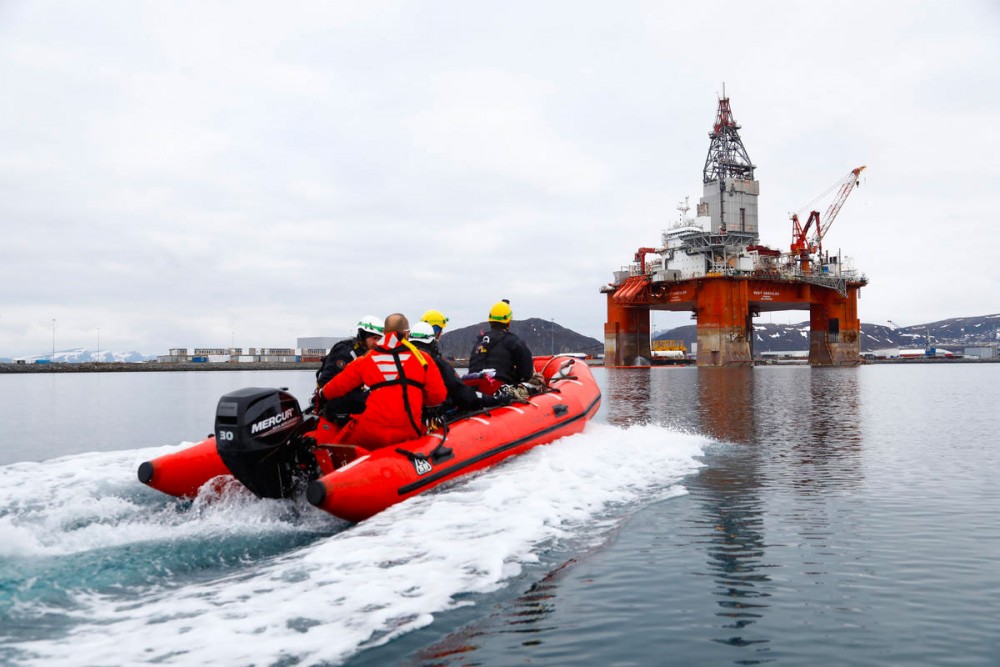 Four representatives of Greenpeace jumped onboard oil rig «West Hercules» as it was being made ready for the drilling of one of the northernmost ever wells.
Read in Russian | Читать по-русски
By

«Stop drilling in the Arctic,» a banner raised by activists onboard the «West Hercules» reads. The environmentalists on Monday morning paddled with kayaks to the installation that was moored on the waterfront of Hammerfest, the Norwegian Arctic town.

«Norwegian oil is boiling the earth,» a second banner reads. «People vs oil» and  «the people against oil», more banners read.

«We are in a climate crisis that demands that we actually do something,» activist Camilla Lennerthson says in a statement. «I am here and do what I can to tell the Norwegian government that if we are to keep our planet livable over the next years, then we have to stop looking for new oil,» she underlines.

The «West Hercules» is owned and operated by company Seadrill and is now getting ready for a drilling operation in the northern parts of the Barents Sea. The installation will in May be towed about 420 km north of the Norwegian coast to one of the northernmost license areas in Norwegian waters. The Korpfjell area is located on 74 degrees north and is operated by Equinor.

«To drill for oil in the Arctic, now when the region is melting more quickly than ever before, is madness,» says leader of Greenpeace Norway, Frode Pleym. He underlines that the protest is a strictly non-violence action.

The boarding of the «West Hercules» comes just few days after the Norwegian Petroleum Safety Authority issued an announcement about serious technical irregularities on board the installation. According to the oil safety watchdog,  there are several «comprehensive breaches» of  national regulations. In addition, owner Seadrill has failed to follow up previous reported breaches.

The «West Hercules» is built in 2008 and has drilled a number of wells in Arctic waters.

No halt in Norway’s hunger for Arctic oil