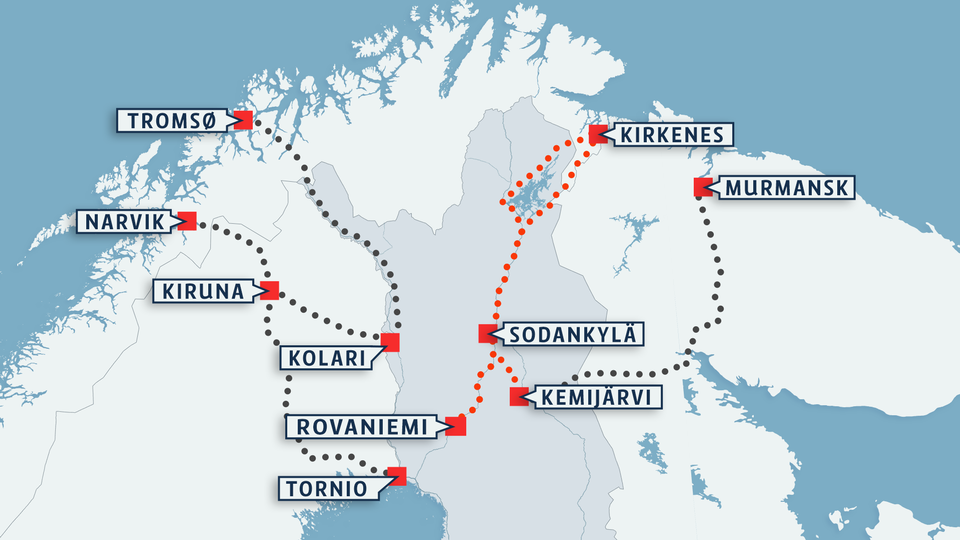 The Regional Council of Lapland decided on Monday to include a controversial rail line from Rovaniemi to Kirkenes, Norway in an updated regional land use plan.
Read in Russian | Читать по-русски
By

The Regional Council, which represents 21 member municipalities, decided to indicate future use of the route, even though at present there are no plans for constructing the rail line, and consultants for Finland’s Ministry of Transport and Communications have deemed the project economically unviable.

As envisaged, the line would cut through traditional lands of Finland’s indigenous Sámi people and their northern reindeer herding areas. It has aroused opposition from both the Sámi Parliament and reindeer herding associations along the route.

Although the Regional Council of Lapland took into consideration some of the details of Sámi reaction to the idea, it did not drop the Arctic rail line, or the northern route to Kirkenes from land use planning.

Referencing a position statement on the issue by the Sámi Parliament, the Regional Council of Lapland pointed out that the Sámi do not have a veto on land use planning, and discussions with the Sámi are not required to lead to agreements or recommendations.

The council’s vice-chair, Heikki Autto, told Yle that the rail project is too important for any single interested party to have a veto over it.

“In the future this will possibly be one key logistic connection of importance not only to northern Lapland, but also to the whole of Lapland, to Finland and the European Union. We still don’t know what the world will look like in the 2030’s or 2040’s, but with this land use plan we have a tool with which to develop this area, if constructing the rail line happens then,” said Autto.

Autto also rejected claims by the Sámi Parliament that if constructed, the rail line would destroy the basis of Sámi culture and livelihood.

“As a native to the area myself, I see it as important that we ensure that families can settle in the Sámi homelands as well, find a variety of jobs and sources of income, including those continuing traditional livelihoods which preserve the Sámi language and culture,” Autto added.

A radically different view was expressed by council board member Henri Ramberg. Ramberg says that the Sámi did not have their views sufficiently well heard during the drafting of the land use plan, nor when the Regional Council of Lapland expressed the hope that a new government will move ahead with an Arctic rail line project.

“Here we run into constitutional questions regarding Sámi culture. The part of this [plan] routed through Sámi areas should have been buried. Simply with this land use plan we are enabling the construction of the rail line. As a consequence the bottom can be knocked out of the culture and the future of the culture of the people of the Sámi areas,” Ramberg argued.