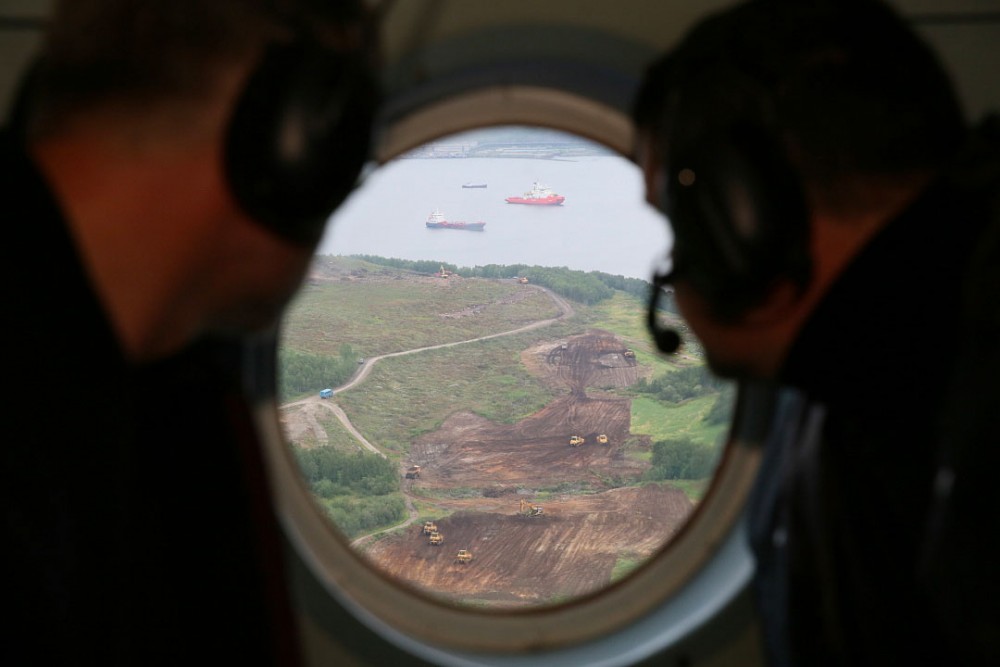 A view towards Lavna and the Kola Bay. From a visit to site by Deputy Premier Maksim Akimov and Transport Minister Yevgeny Ditrikh. Photo: gov-murman.ru

In two years time, up to 18 million tons of coal will be shipped out from the new Lavna terminal near Murmansk.
Read in Russian | Читать по-русски
By

Partners have inked the agreement that paves the way for a large-scale infrastructure development on the western shores of the Kola Bay. The new Lavna coal terminal will have the capacity to handle 18 million tons per year. Practically all of it will be exported.

The agreement was signed in the premises of the Ministry of Transport in downtown Moscow on the 17th April. In the room were Minister Yevgeny Ditrikh and representatives of the investors. Among them the leaders of the State Transport Leasing Company, the BiznesGlobus, Center of Development of Port Infrastructure, SCS-Ugol and the Russian Railways.

The new terminal, as well as the connecting new railway line, is built on a so-called concessional agreement. The deal allows Russia to carry out the project without major state investments.

«The Lavna  port development project is strategically important for our country […] it is a modern high-tech deep-water port in Murmansk that allows for reloading of 18 million tons per year,» Minister Ditrikh says in a comment.

The project includes 2,3 km of access rail lines to the terminal, Ditrikh said as the investors signed the project deal.

The terminal is estimated to cost up to 24 billion rubles (€340 million). That does not include the connecting 46 km long new railway line.

The project has got backing from the highest political level and was specifically mentioned by President Vladimir Putin in his recent speech at the Arctic Forum in St. Petersburg.

Construction on site has already started, the project partners say. And the installation will be ready for full-scale operations in 2021. More volumes could ultimately be added to terminal. A separate facility for fertilizers is reportedly discussed by the partners.

Several of the owner companies of the new installation represent interests closely associated with the powerful coal industry in Kuzbass, the coal region in south Siberia. The lion’s share of the coal transported to Murmansk comes from that region. From before, coal company SUEK is key owner of the Murmansk Sea Port, the logistics facilities located on the eastern side of the Kola Bay.