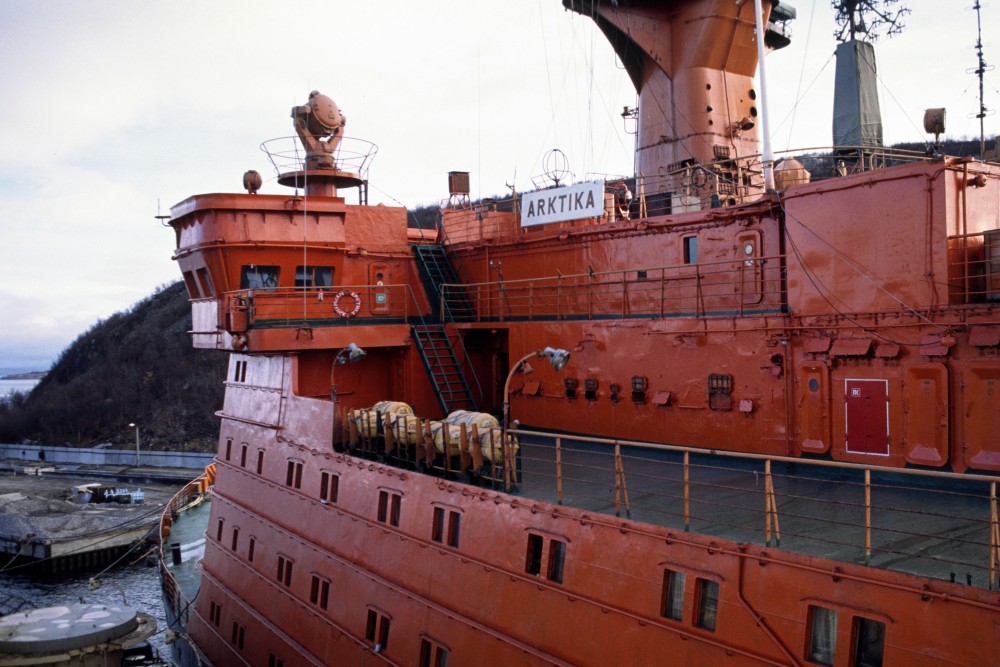 While the Nerpa Shipyard on the Kola Peninsula starts preparing to unload nuclear fuel from the reactors of the old icebreaker «Arktika», the Baltic Shipyard in St. Petersburg loads fresh uranium fuel into the reactors on the new «Arktika».
Read in Russian | Читать по-русски
By

Nuclear-powered icebreaker «Arktika» is a legend in Arctic waters. Not only being the first in the series of powerful Soviet icebreakers opening for commercial sailings along the Northern Sea Route, the orange painted «Arktika» was also the first surface vessel in the world to reach the North Pole.

After 33-years in operation, «Arktika» was taken out of service in 2008. For tens years, the icebreaker was laidup at Atomflot north of Murmansk, partly awaiting its two reactors to cool down, partly awaiting funds for decommissioning.

Last year, the ship was towed to Nerpa Shipyard on the coast to the Barents Sea where dismantlement will happen after the highly radioactive fuel elements in the two reactors are taken out. Then, the reactor compartment will be cut free and placed for long-term storage at the facility in nearby Saida Bay.

According to the news site of the environmental group Bellona, preparation to unload the fuel has now started and the work itself will happen in November.

After «Arktika» is dismateled follows «Sibir» which is an icebreaker of the same design. Two more Arktika-class vessels are in line for decommissioning, the «Rossiya» and «Sovyetsky Soyuz».

Meanwhile, at the Baltic Shipyard in St. Petersburg, the new «Arktika» icebreaker are being built. This week, the portal Atomnaya Energiya reported that uranium fuel elements are being loaded into the reactors and testing can soon start. The new «Arktika», which is of the Project 22220, is more powerful than the icebreakers operating out of Murmansk today.

«Today is a big day, the first fuel loading into the first Project 22220 icebreaker has begun,» said Rosatom Deputy Director and Head of the Northern Sea Route Directorate Vyacheslav Ruksha.

The two RITM-200 reactors onboard has a thermal capacity of 175 MW each.

The new «Arktika» is expected to sail out from St. Petersburg in May next year en route around Scandinavia to Murmansk.

«Ural» will be launched (put on the water) on Saturday this week, the Baltic Shipyard reports.