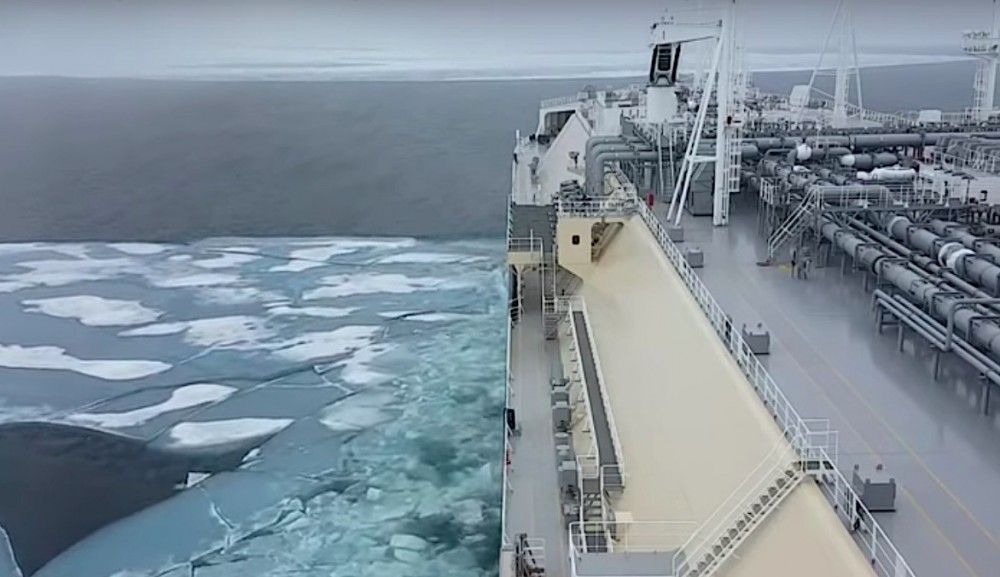 The maiden voyage of top ice-class LNG tanker «Nikolay Yevgenov» goes through the Suez Canal and not the Northern Sea Route. Only few vessels in 2018 chose the Arctic shortcut between Asia and Europe.
Read in Russian | Читать по-русски
By

The «Nikolay Yevgenov» on 21st April set out from the DSME shipyard in South Korea. Few days later, the ice-class Arc7 sailed through the Suez Canal and into the Mediterranean.

The tanker is owned by a consortium of companies Teekay and China LNG Shipments and built for shuttle traffic to and from Russian Arctic LNG terminal of Sabetta. It is the 11th tanker of the kind delivered by the Korean shipyard to the stakeholders in the Yamal LNG project. Like its sister ships, the «Nikolay Yevgenov» is capable of breaking through up to two meter thick ice. But despite its high ice classification, the ship still chose the southern route through the Suez on its way westwards.

As it sails through the warm waters of the Mediterranean, ice still lies thick in Russian Arctic waters. The lion’s share of the Laptev and East Siberian Seas was the first week of May covered by up to 200 cm thick one-year ice. In an area north of the Siberian coast lies a belt of even thicker multi-year old ice. And south of the North Siberian Islands and in the Vilkitsky Strait are solid layers of fast ice, data mapping by the Russian Arctic and Antarctic Research Institute shows.

Despite major melting over the past years, spring ice on the eastern part of the Northern Sea Route remains almost impossible to break through.  That is reflected in shipping figures in the area.

According to data presented this week by the Center for High North Logistics, a Norwegian information hub on Arctic transport and logistics, a total of  491,000 tons of cargo was shipped transit across the Northern Sea Route in 2018. That is more than the previous two years, but still insignificant compared with other routes.

Ice is a key hurdle to transit shipments on the NSR. But that is not the only issue, Bjørn Gunnarsson, Senior Researcher from Norway, underlines.

«Further significance of international transit shipping on the NSR will depend on interest from Russia, a sustainable cargo base, year-round shipping and needed navigational support infrastructure,» Gunnarsson said in the Arctic Circle China conference in Shanghai.

Russia has made the Northern Sea Route a top policy priority. However, the country’s main emphasis is put on shipments between Arctic ports and terminals, and not on transit shipping.

The target for the overall NSR shipping, set by President Vladimir Putin in his so-called May Decrees, includes an annual total of 80 million tons of goods by year 2024. That is within reach, state company Rosatom said last month. The nuclear power company that has got key responsibilities for developments in the Russian Arctic, believes shipping on the NSR could reach as much as 92,6 millions by that year.

A total of 227 vessels conducted a total of 2022 voyages on the route. Tankers and general cargo ships made up more than 50 percent of the traffic an overwhelming part of the shipments were made to the Yamal Peninsula and the surrounding Kara Sea and Gulf of Ob.