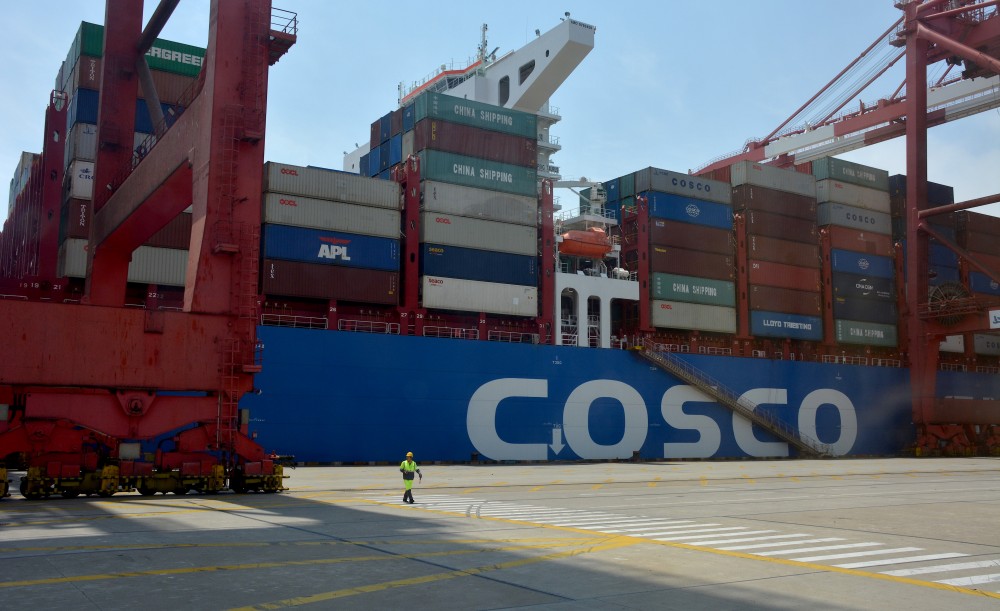 COSCO in the container port of Shanghai. Photo: Atle Staalesen

«Our development strategy is to serve the Polar Silk Road and international trade between the North Atlantic region and the far east,» Chen Feng, General Director of COSCO Marketing and Sales, said during a conference in Shanghai. «It is smooth and quick,» the company representative said about the Arctic shipping route.

Chen did not want to specify the number of planned voyages, but made clear that there would be «several of them», both eastbound and westbound. Much depends on weather and ice conditions, as well as customs demands, he said in a speech delivered at the Arctic Circle China conference.

Time is the essence, the general director made clear. «It is possible to save ten days on a shipment between Asia and Europe when choosing the Northern Sea Route, and that means saving of costs.» He also underlined that the shorter shipping distance can help the company reduce fuel energy which is beneficial for environment and also the that Arctic Route means no pirate problems like on the southern route through the Suez Canal.

The west-bound shipments will be made mainly from China but possibly also from South Korea and Japan. «We are also ready offer services from the North Atlantic region, including European North America side to far east through he Arctic Ocean, the Northeast passage.»

COSCO has over the past five years been the leading company in transit shipments along the shipping route through Russian Arctic waters. The first two shipments were made in 2013 and in 2018 a total of eight voyages were made.

In the course of the five year period, a total of 22 trans-Arctic shipments have been conducted by the company.

Environmental aspects are of key importance for the company, Chen Feng underlined. «We follow environmental protection when sailing and we are ready to offer sustainable shipping service in accordance with rules and regulations.»

The growing Arctic activities of the state-owned company comes as China’s engagement in the region intensifies. The country’s so-called Polar Silk Road has become a component of the grand Belt and Road initiative, and Russian authorities earlier this month made clear that they see their Northern Sea Route as part of the picture.

Despite rapid ice melting along the Russian Arctic coast, the waters in the area remain highly complicated for ships. In 2018, a total of 491,000 tons of cargo was shipped on the route, most of it by COSCO’s eight Chinese ships.

The China Ocean Shipping Company - COSCO - is one of the biggest shipping companies in the world. More than 130 ships are in the company fleet. Only few of them however have solid ice protection standard.