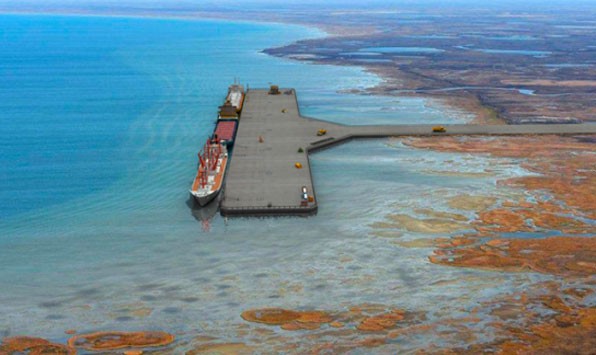 On the desolate shores on peninsula Gydan comes the terminal that is to serve one of Russia’s biggest ever Arctic projects.
Read in Russian | Читать по-русски
By

The Utrenneye terminal is built to handle shipments to and from the Arctic LNG 2 project. This week, it was approved by a state expert commission.

The building process will proceed in seven stages, the first three of which will include the building of state-owned infrastructure objects, Glavgosexpertiza informs. That includes a major ship channel through the nearby shallow waters of the Ob Bay and the installment of navigational equipment.

The following four stages are aimed at the private investors’ building of new port objects on site, as well as reconstruction of existing facilities. Big volumes of landmass are to be shipped to site for the building of new port sides and the existing pier will be upgraded. Several more coastal infrastructure objects will be built, Glavgosexpertiza says.

The federal budget will cover 26,57 percent of the costs, while the private investors will account for the remaining 73,43 percent.

It is Russian natural gas company Novatek that is operator behind the project. On the team are also French company Total and the two Chinese companies CNODC and CNOOC. More companies might ultimately join.

The LNG project is based on the resources of the Salmanovskoye field, a structure that holds 1,98 trillion cubic meters of natural gas and 105 million tons of liquid hydrocarbons. It is located in the Gydan Peninsula, near the shores of the Gulf of Ob. On the other side of the bay lies Sabetta and the Yamal LNG plant.

Until launch of the Arctic LNG 2 presumably in 2022, the Utrenny port will handle shipments all through the year.

The Arctic LNG 2 will produce a projected 19,8 million tons of LNG per year. The project includes three development trains of 6,6 million tons of LNG each. The natural gas will be shipped out through ice-covered waters with a new fleet of ice-class carriers to buyers in Europe and Asia.

A key part of the Arctic LNG 2 project is the ongoing building of the Belokamenka plant in Kola Bay near Murmansk. The plant will build production platforms that when ready will be towed to the production site. The platforms are based on so-called gravity-based structures. Proportions are massive. According to Mikhelson the installations will be more than 300 meter long, 150 meter wide and 70 meter high.

The Belokamenka plant in Murmansk will create up to 15,000 new jobs and include investments of 100 billion rubles, Novatek leader Leonid Mikhelson told acting Murmansk Governor Andrey Chibis during the recent St.Petersburg Economic Forum.