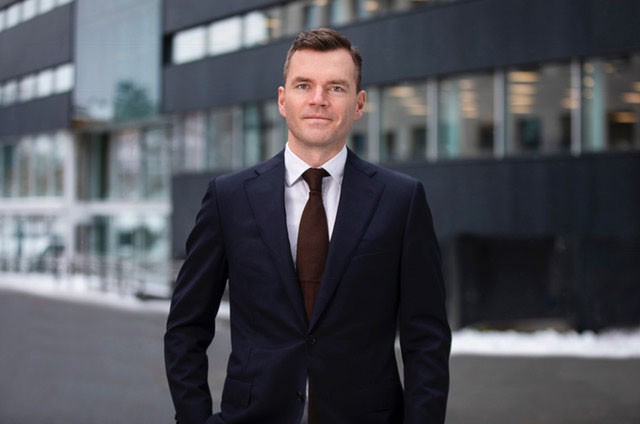 Petter Østbø is new CEO of Eurochem Group, the company that owns major mining resources in the Kola Peninsula and controls a big share of the Murmansk seaport.
Read in Russian | Читать по-русски
By

Mr. Østbø comes from the post as Chief Financial Officer of competing Norwegian company Yara and took over the reigns in Eurochem on 1 June.

«The Board is delighted that Petter Østbø is joining the team, he is highly regarded in our industry and brings broad experience to the position,» EuroChem Group Chairman Alexander Landia says in a comment.

Østbø worked several years in Yara and was appointed Chief Financial Officer in early 2018. In that post he remained only eight months.

He now takes over one of the most powerful companies in the Russian mining industry. Eurochem is a major producer of phosphate fertilizers. It also produces iron ore concentrate, as well as the rare mineral baddeleyite.

A key operational area for the company is Kovdor, a town with a population of about 18,000 located in Murmansk region only few kilometers from the border to Finland. It is an area with a ground packed with valuable ores and minerals. Geologists believe the local Kovdor Field alone is one of the world’s biggest deposits of iron ore and phosphates, as well as several more minerals and metals. Including the valuable baddeleyite.

In 2017, geologists conducted a major 3D study of the deposit and concluded that it can bring the company vast revenues over a many-year period and at very low costs.

The resources in Kovdor have given Eurochem owner Andrey Melnichenko billions of euros in revenues. He now has an estimated personal wealth of $13.8 billion and ranks 90th in the Forbes world’s billionaires list, and 8th in Russia.

In addition to Kovdor, Eurochem has owner interests in a big number of more companies located both in Russia and abroad. That includes the seaport of Murmansk.

The company in 2013 bought a 47,67 percent stake in the port. Another major share of the port was obtained by SUEK, the coal company that also is owed by Melnichenko.

While Eurochem uses the Murmansk port for exports of fertilisers and ore from Kovdor, SUEK exports major volumes of coal from site. For several years, the coal company has exported more than 14 million tons of coal from Murmansk, which is about 90 percent of the total port turnover.

According to Eurochem, considerable sums are invested in local social and economic development. In an email, a company representative makes clear that at total of $6.63 million (RUB 431.53 million) was spent on social and charitable programmes in Kovdor, including on sports, health, education, social infrastructure and the environment, in the period 2015-2018.

The company is registered in Zug, Switzerland, and tycoon Andrey Melnichenko spends a major share of his time outside Russia.

Petter Østbø is himself unlikely to spend much time in Kovdor. Instead he might rather meet his boss Melnichenko onboard «Sailing Yacht A», the 142 meter long vessel owned by the business leader. The Bermuda-registered ship with an estimated worth of 500 million is this summer cruising the waters of the Mediterranean and is now docked outside Cannes, France.

Østbø, by the way, is not the only Norwegian with a powerful position in the Russian mineral fertilizer industry. From before, Sven Ombudstvedt has for a number of years been board chairman of Phosagro, the other main fertilizer producer in the Murmansk region. Ombudstvedt in May this year stepped down from the post as board chairman and today serves as regular board representative, the company says on its website. Also Ombudstvedt has a background in Norwegian company Yara.

In Panama Papers, a trace to Murmansk