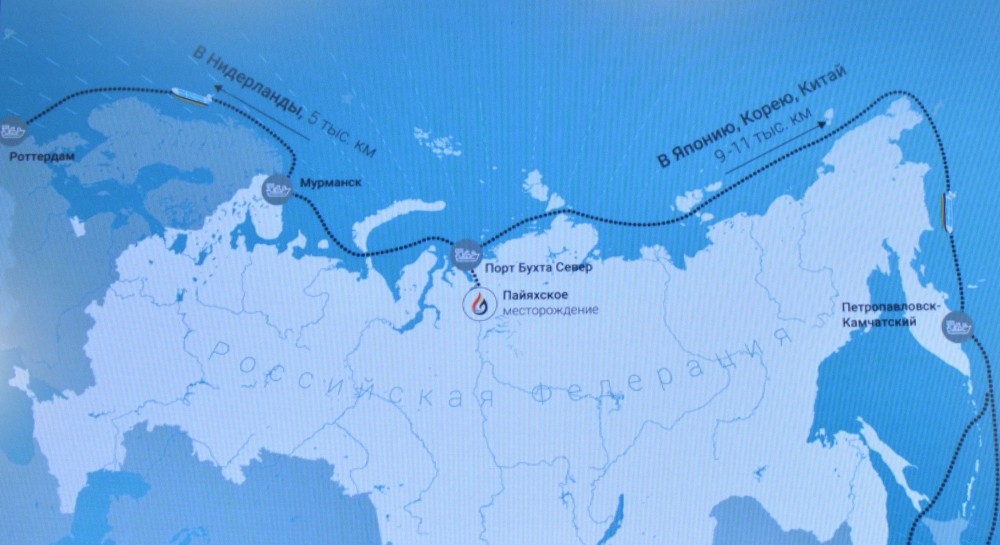 The Payakha oil will be shipped out through the Northern Sea Route. Photo of project presentation: Atle Staalesen

Operations are in the making at Payakha, the oil fields that could become among the biggest in the Arctic.
Read in Russian | Читать по-русски
By

It is Neftegazholding, the company owned by former Rosneft leader Eduard Khudaynatov, that now unfolds major activities in the oil fields situated along great river Yenisey.

The Payakha could hold up to 1,2 billion tons of oil. Russia’s state mineral extraction agency Rosnedra earlier this year made a significant upgrade of the field’s resource potential.

Drilling on site started on the 13th of June.

«Today is a triumphant day,» Andrey Polyakov, company Vice President said in a ceremony. «The preparatory and testing phases are completed and we start drilling of the first group of wells in the unique Payakha area,» he underlined.

On site were local journalists from TV channel Yenisey.

The Neftegazholding intends to produce an annual 26 million tons of oil on site. A big number of wells are to be drilled a special rig has been installed on site, facilitating working conditions on site. The installation is roof covered, which provides workers with protection against the harsh Arctic winds and severe temperatures.

The project includes the building of a more than 400 km long pipeline to Dikson, the town on the Kara Sea coast, as well as a major sea terminal. The oil is planned shipped both west- and eastwards on the Northern Sea Route

It could become a key part of Vladimir Putin’s grand plan to boost annual shipments on the Northern Sea Route to 80 million tons by year 2024.

Potentially, the Payakha resources could become a crucial component also in a new Arctic oil pipeline planned by Rosneft. The state oil company says it intends to build a 600 km long pipeline from the Vankor fields in western Siberia to the coast of the Taymyr Peninsula. It might connect with the Payakha area.